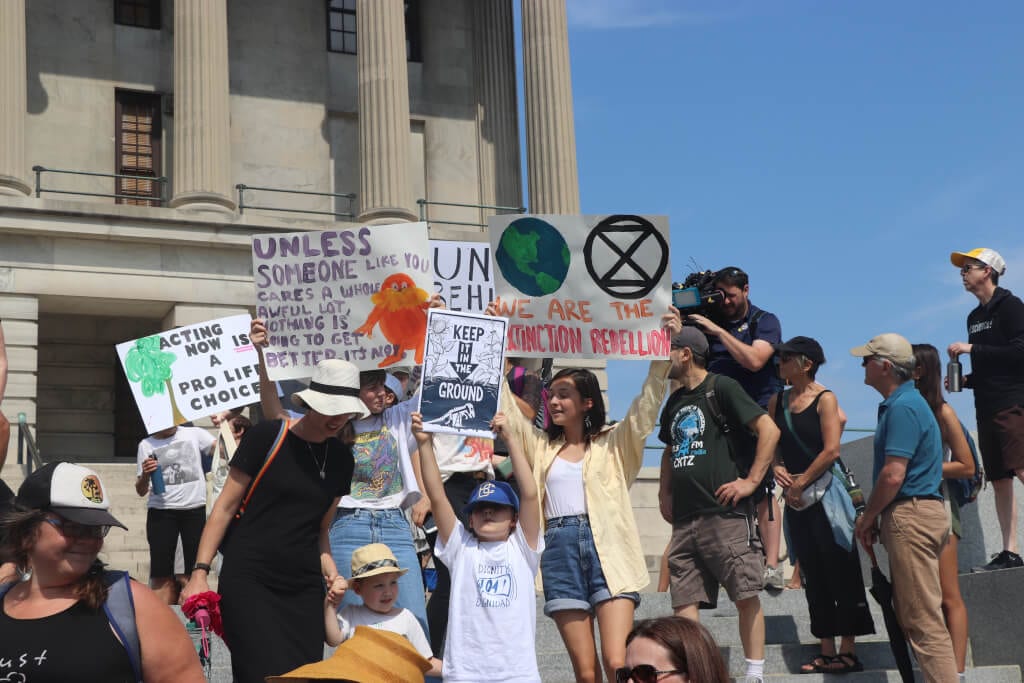 Inspired by teenager Greta Thunberg, who started protesting every Friday in front of the Swedish parliament a year ago, millions of young people rallied in Australia, Asia, Africa, Europe, and the U.S. in a one-day Global Climate Strike on Friday, September 20.

Children in the Solomon Islands rallied on the shoreline wearing traditional grass skirts and carrying wooden shields. In Canberra, the Australian capital, 10,000 students skipped school. Eighty thousand turned out in Sydney. One hundred thousand marched in Melbourne. Thousands marched over the Victoria Bridge in Brisbane. Acting Prime Minister Michael McCormack told reporters the kids should have waited until Saturday to protest.

While authorities downplayed the size of the crowds, young people marched in huge numbers all over the globe demanding urgent action to stop global warming. The kids are worried about their future and angry that grown-ups are burning up the planet. The Strike took place just three days before the U.N. Climate Action Summit in New York September 23.

Organizers put the total number of people participating in the global climate strikes at about 4 million.

“The event was truly global and astonishingly well organized: There were over 2,500 events scheduled in over 163 countries on all seven continents,” reported the online news website VOX.  They called it the largest the largest climate protest in world history.

It will likely become the world’s largest protest ever held about anything. The previous record was February 15, 2003 when 3 million people took to the streets to protest the war in Iraq, according to the Guinness Book of World Records.

“The world is watching and looking to our youth today for which I’m glad. We demand and require action now,” said Carolina Sears, a Sunrise Movement Nashville organizer. Sunrise is an environmental youth group that planned the gathering on the steps of the State Capitol and the evening rally at Public Square.

“We are here today because we are outraged and desperate for action on climate change, “ she said.

Scientists say it’s real and within a few decades, the polar ice caps will melt, the Great Barrier reef in Australia will die, tornadoes and hurricanes will ravage countries and coastlines around the world, making life on earth all but impossible if drastic action is not taken soon.

The simple cure: keep carbon in the ground and stop burning fossil fuels. The simple truth: that’s easier said than done. The U.S. has an economy built around the automobile and will find it hard to wean itself off gasoline in time to avert catastrophe. President Trump withdrew the U.S. from the Paris Climate Agreement on June 1, 2017.  Trump was making good on a campaign promise to put America first.

China has built its economy on coal-fired electricity and it is the world’s worst polluter. But under the 2016 Paris Agreement, China promised to get 20% of its energy from renewables by 2030. By 2040 China is expected to produce one-quarter of the world’s renewable energy.

When it comes to saving the planet, Washington seems clueless and deaf to the pleas of young Americans to take seriously the imminent threat of the earth’s extinction.

“I think that they have a mindset of ‘oh well, we’re going to die off so we’re going to have to leave it to them’,” said Robin August-Fritsch, a guitar student at Nashville School of the Arts. “Now we are here and it’s left for us to decide,” she said.

Young people are better informed than their parents on these issues and they say there is no time left. We must act now or there will be no future for them or the planet. Lipscomb University freshman Calah Gibson knows one thing to do.

“A carbon tax, definitely,” Gibson said.  ”Businesses will give off fewer emissions if they are charged for it.”

“We have to ban fracking in this country,” said Eric Lewis. He runs a Facebook page called Frack-Free Tennessee.

In 2014 Lewis and friends built a 50-foot black plastic tube with a big snake head to protest the Keystone XL pipeline. “They haven’t finished it so we are still fighting Keystone after all this time,” he said.

“They can go several miles underground with these pipelines and they are sucking out all the oil from dinosaurs and tress left millions of years ago. And in their wake they have this big pile of sludge that is not only filled with 40 different chemicals that went down the hole but also with radiation and chemicals like arsenic and radium,” Lewis said. He said there are 105 wells in East Tennessee and he doesn’t want any more.

Several speakers spoke briefly to the crowd at the Capitol and later in Public Square. No public official attended either rally and nobody over 30 addressed the crowd.

Lily Schade, 4th grader at Sylvan Park Elementary and her friend, 2nd grader Chloe Brock, wandered over to the side of the square and climbed a tree because the older kids were scaring them.

“Why are they saying stuff like that?” wondered Schade. “It’s so sad.”

“I feel like the earth is going to burst into flames. It’s terrifying,” said Brock,

As they lay there Minnie Mangafas spoke somberly for 17 minutes, one minute for every year the youth say we have left before it’s too late.  But she ended on a positive note.

“Things may seem hopeless but we are not helpless,” she said.

Greens in the Streets and to Congress: No War With Iran, Troops Out of Iraq, Repeal the War Powers Act