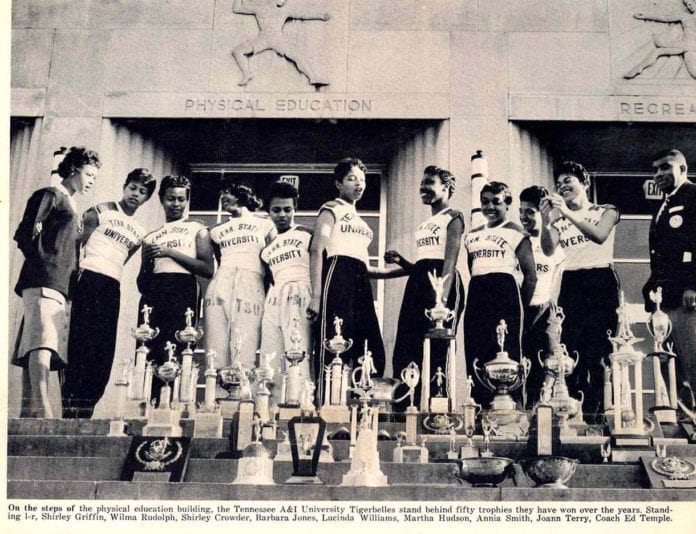 NASHVILLE, Tenn. — February 12, 2019 — A special free screening of Mr. Temple and the Tigerbelles, a documentary telling the story of legendary Tennessee State University (TSU) track and field coach Ed Temple and 40 African American female athletes who broke the color barrier at the 1960 Rome Olympic games, will take place at the Tennessee State Museum on Saturday, Feb. 16, from 2:00-4:00 p.m. The Museum is located at 1000 Rosa L. Parks Blvd. at the corner of Jefferson Street on Bicentennial Capitol Mall State Park. Registration for the free event is requested through Eventbrite or TNMuseum.org/calendar-of-events.

Mr. Temple and the Tigerbelles, which was included on the 2018 International Documentary Association’s short list of film shorts, boasts a stellar roster of interviewees and rare footage of the athletes who brought home 23 medals from the Rome Olympic games, including 16 golds. Wilma Rudolph, the Tigerbelle to achieve the most acclaim, became the first American to win three gold medals in a single Olympic Games. All the women completed their college education earning their bachelor’s degrees, with many earning masters and doctorates.

Mr. Temple and the Tigerbelles was nearly three years in the making. “The more we got into the story, the more pressure we put on ourselves to tell it in an innovative way,” says writer-director Neff, who teaches film, documentaries and media management at MTSU and is the Emmy-winning founder of the Documentary Channel.

Mr. Temple and the Tigerbelles shows how the young women of TSU struggled to practice with no financial aid and no support during the Jim Crow era. “They could win gold medals at the Olympics, on a world stage, and yet come back home and not be able to eat in a restaurant,” says Gentry, whose family served TSU since the late 1940s and whose father was the football coach at TSU during the period of Coach Temple.

The film aired last spring on the CBS Sports Network, and the filmmakers plan to enter it in festivals. It was also named as an official selection of the 2018 HollyShorts Film Festival in August.

DVDs of Mr. Temple and the Tigerbelles will be available to purchase at the Museum Store and online. A portion of sales go to the Ed and Charlie B. Temple Scholarship Fund and the Coach Edward S. Temple Fund for New Hope Academy at the Community Foundation of Middle Tennessee.

You can learn more about the film by visiting, www.tigerbellesmovie.com.

About the Tennessee State Museum:

The Tennessee State Museum, on the corner of Rosa L. Parks Blvd. and Jefferson Street at Bicentennial Capitol Mall State Park, is home to 13,000 years of Tennessee art and history. Through six permanent exhibitions titled Natural History, First Peoples, Forging a Nation, The Civil War and Reconstruction, Change and Challenge and Tennessee Transforms, the Museum takes visitors on a journey – through artifacts, films, interactive displays, events and educational programing – from the state’s geological beginnings to the present day. Additional temporary exhibitions explore significant periods and individuals in history, along with art and cultural movements. The Museum is free and open to the public Tuesdays, Wednesdays, Fridays and Saturdays from 10 a.m. – 5 p.m., Thursdays from 10 a.m. – 8 p.m. and Sundays from 1 p.m. – 5 p.m. For more information on exhibitions and events, please visit tnmuseum.org.

50 Years After Black Monday in Memphis

NJ Seminary to Pay $27M in Reparations for Slavery Ties