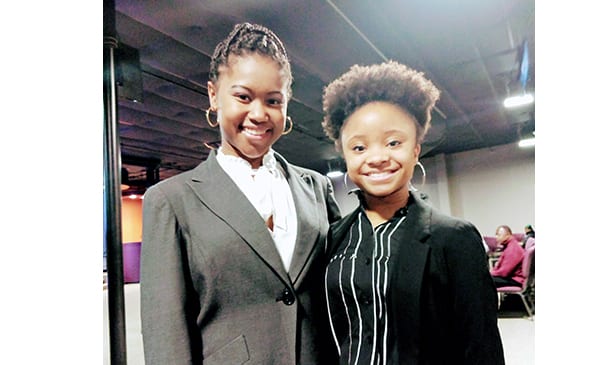 KNOXVILLE, TN — “They Hate to See Us At Our Best, That Is Why We Never Rest”

This was the topic of the Oratorical Contest held in Knoxville during the Youth Symposium held by the MLK Commission.  Sponsored by  Jack & Jill  Inc., the contest was open to middle and high school students  in Knoxville TN. The top two winners were presented before a crowd of over 2000 during the closing ceremony of the King memorial celebration at Overcoming Believers Church.

The young ladies who finished first in the competition: Ayanna Albright and Elena Kendricks, pulled no punches in their speeches which drew standing ovations and cheers.

Ms Albright, citing Wilma Rudolph as an  example,  spoke of the  strong black women who overcame racial barriers to become great leaders by striving against all odds to be the best. She spoke of the continued duty of the present generation “to become our best self and to refuse to let the fate of our lives rest in the hands of others”. Albright  closed her remarks by reminding the crowd of Dr. Kings words that “ freedom is never voluntarily given by the oppesser but must be demanded by the oppressed”.

Elena Kendricks then stepped up to the microphone and spoke about colorism (racism against self and your race based on your skin color) and the need to see the beauty of the race from “olive to the beautiful black as a moonless night . She pulled no punches as she spoke fervently to her generation and those who came before, of the need to stop using the N word as a positive, saying “it is time to stop exhuming it like a plaging corpse”.

Kendricks spoke of the pain she  had already endured at 16 years old , of being  told she was not black enough and  being told she was smart “for a black Girl” She closed her remarks by reminding everyone of the need to see themselves at their best.

Striding across the stage,  as they passed each other going to the podium, they gave each other a high five…. Powerful and confident.