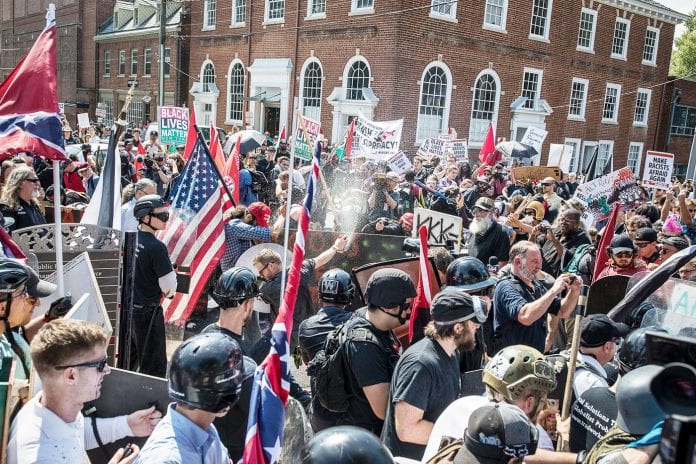 The world got a chance to see America at its worse this past weekend, with a sick and disgusting collection of racist Klan and Nazi types descending on a college town to champion their message of hatred and bigotry. For many who’ve seen other displays like this through the years, it was no surprise that this kind of sickness still exists in our nation. That three people lost their lives in this carnage, two of them state troopers only doing their job and a third a young woman who was part of the crowd that a depraved individual drove his car into only adds to the sadness and the despair that many are feeling this week.

But what made matters even worse, if that’s possible, was the behavior of the man who is supposedly the nation’s leader. Donald Trump (calling him President makes a mockery of the office even if there were people stupid enough to elect him to it) gave a speech in which he tried to simultaneously act as though he was upset at what happened, yet also take the white supremacist trash who were responsible for it off the hook. He claimed to be upset about the hatred and violence happening “on all sides,” as though peaceful protesters who had assembled to show their stances against the bigotry were equally as guilty as the torch-wielding, slogan shouting mob who had incited the violence in the first place.

Then Trump topped things off after his worthless speech by refusing the direct opportunity to denounce the Nazis and Klan types at the event. He turned and walked away, despite repeated attempts by reporters to get him on the record officially denouncing white supremacists, either groups or individuals. It was no surprise that the likes of David Duke and other prominent racists quickly took to microphones almost in celebration. “He didn’t denounce us,” was one comment. “We are doing what we promised to do with the election of Donald Trump,” was another one. Throughout their tirades and deplorable conduct, which included at least one public beating of a Black man that was captured on video, these racists kept chanting about “not being replaced” and how they weren’t going to be stopped.

The entire event was organized to protest the removal of Confederate statues in Charlottesville and other parts of Virginia and throughout the South. The fact that states have finally begun to recognize that both the rebel flag and the statues of Confederate war generals are symbols of an evil that the nation fought to defeat is bringing out of the woodwork slime that has always been around. Since the days of reconstruction and moving forward through all the decades up to the present there have been racists and bigots who sought to prevent Blacks from ever attaining any measure of equality in this society. Whether it was Klansmen leading marches, burning crosses on the lawns of Black families, lynching citizens, whatever they could do they did it.

Their Nazi co-horts did the same thing in urban areas, with tactics ranging from verbal threats to physical violence. While they have also targeted at various times Jews and Catholics, and currently Muslims, their main targets remain people of color, and in particular Blacks in areas where they feel they constitute the biggest threat. The South has long been a battleground, especially since the Civil Rights and Voting Rights Acts formally abolished Jim Crow and state sanctioned segregation. No matter what these people try to claim publicly, their agenda of hatred and intimidation through physical violence and terror has NEVER changed. They are every bit as vile and dangerous in 2017 as they were in 1917 or 1947, and anyone who doesn’t think so is either unintentionally or deliberately fooling themselves.

But this folks and their disgraceful crew will sadly always be around. It is something quite different when a so-called President of the country is in league with them, and even has members of organizations that are either directly or indirectly in league with them as part of his inner circle. What happened in Virginia over the weekend can be laid directly at the doorstep of Donald Trump, not because he called for it or orchestrated it, but because he has created a climate where they feel they are now comfortable to openly express their despicable sentiments in public.

During his campaign Donald Trump first claimed he didn’t know who David Duke was, then later issued a meek denunciation after being repeatedly badgered by reporters to do so. Saturday he wouldn’t even acknowledge any direct responsibility for what happened, and later stalked out over being asked to specifically denounce white supremacists. Even the Ted Cruz’s and Orrin Hatch’s of the world have specifically voiced their disdain and opposition to what happened Saturday, but Donald Trump either can’t or won’t or both.

Those three lives that were lost, the horrendous carnage that the world witnessed, and the defiance that these bigots and racists publicly showed Saturday all is directly linked to the conduct, rhetoric and attitude of one Donald Trump. Until and unless he changes his demeanor and truly decides to address this situation, as well as the Justice Department actually get involved in helping local municipalities react appropriately when a crisis strikes, America will continue to see what it saw last weekend.

“It City” Still Has a Lot of Hate to Cleanse