MEMPHIS, TN — When I first heard of the movie “If Beale Street Could Talk” I got excited about the possibility of seeing the legendary Beale Street of Memphis on the big screen. To

my utter disappointment this movie has nothing to do with the 1.8-mile long street in Memphis.

My disappointment is rooted in my personal “Beale Street Experience.”

I was introduced to Beale Street by my father, the late Rev. Leo M. Gray Sr. Periodically, he would take my two brothers and myself to the New Daisy Theatre on Beale. I remember asking him why we were not going to the Princess on Main Street.

“At the New Daisy we don’t have to sit in the balcony, we can sit on the main floor,” he said.

Mr. Robert Morris managed the New Daisy Theatre and was my school principal. En route to the New Daisy, we were enthralled by the carnival atmosphere, the aroma of soul food and the eccentric characters of Beale Street. The music pouring out of the juke joints and cafes was captivating. The bass guitar and drums moved us to walk with a bounce. We had swag before we knew what swag was.

In 1956, an African-American entrepreneur called “Mr. Buck” would hire boys from our neighborhood to work the Cotton Carnival Parade on Main St. We sold popcorn and cotton 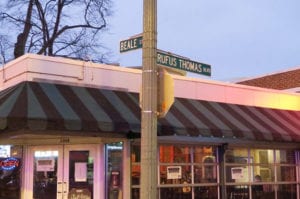 candy from Main and Poplar to Main and Beale. Mr. Buck would meet us half way to collect the money and replenish our trays. When we reached Beale Street, we turned east and walked down to Fourth Street, where he would pick us up.

The Beale Street Experience began the minute we turned on Beale. On Main St., we could not walk on the sidewalk or look our customers in the face as we sold them our goods.

Mr. Buck was very stern as he taught the acceptable behavior for Main Street. We were to avoid prolonged encounters with white females and we were drilled on saying “yes sir” and “no ma’am.”

“Y’all do remember Emmett Till, don’t you?” he would ask.

Free on Beale Street, we joked and played with each other. We looked into people’s faces, walked on the sidewalks and popped our fingers to the hard-hitting rhythm and blues songs. We took advantage of the hot-dog specials and had plenty of the sizzling hamburgers, chitterlings and bar-b-que.

The Cotton Makers Jubilee Parade rolled down Beale Street. We saw African-Americans on floats and in fine decorated cars. On Main Street, African Americans pulled floats or swept up behind the horses.

On Beale Street, the Cotton Makers Jubilee Parade was an all African-American thing. The marching bands of local high schools competed. Their sonic sounds and high-stepping majorettes kept the parade-goers spellbound. The legendary Nat D. Williams, the first radio personality at WDIA Radio, amplified the excitement with commentary.

I will never forget the colorful characters of Beale Street: Men wearing coordinated suits, shoes and hats, with processed hair; curvaceous women walking with advertising gaits and long eye lashes; impromptu street concerts by bands and musicians; “barkers” pleading for customers to enter their stores and shops; shoe shine boys with their mobile shine parlors and the bustling crowds.

A massive and magnificent church, First Baptist Beale, greeted us at Fourth St. Neighboring to the east was Church Park and Church Auditorium. We could go into the park, which was revolutionary to me. I lived across the street from the Winchester Park and could not enter.

When our ride showed up, we scampered on to the truck and claimed our seats. Mr. Buck would collect from each worker and pay off. My first experience on Beale Street far exceeded my compensation; Beale Street had given me a sense of “somebodiness.”

As we drove off, a sense of longing for more filled my spirit from that day to now. I love Beale Street.

Through the annals of history, we realize that Beale Street does talk. It was a mecca for African Americans all over the South.

“Beale Street is a composite of colorful incidents,” the legendary Lt. George W. Lee once said.

Lee collaborated with W. C. Handy and Robert Church to make Beale Street the epic experience of African Americans. Hearing the moans and groans of African Americans vented in song and dance, Handy put pen to scale, the blues was born, and he became known as its father.

Beale Street is too important to the history of African Americans to be trivialized in a movie title. (Courtesy photo)

Church, the first millionaire of African descent in the South, was at home on Beale Street. He controlled political patronage for the “Negro: in the Mid-South from reconstruction through World War I. He was the go-to-person to mobilize the “negro vote” and to get a true reading of the temperament of the “negro.”

Church built a park and auditorium for his people when city fathers continued to make empty promises. In 1899, without a dime of tax money, he built a recreational oasis – second to none – in the midst of the desert of segregation. In “The Bright Side of Memphis,” G.P. Hamilton wrote this about Church Park: “lighted up at night, it looked like a fairy land or garden for the gods.”

Developed for African-Americans, Church Park was opened to all. President Theodore Roosevelt spoke there while Memphis was totally segregated.

Advocacy journalism was born on Beale Street when W.E.B. Dubois partnered with Henry Pace to organize and publish the Crisis Magazine that became the official journal of the NAACP. Ida B. Wells published the Memphis Free Press on Beale Street as she sought to expose the lynching of African Americans and to end the bastard acts of violence.

Run out of Memphis by daily threats on her life, Wells reemerged as a national leader and charter member of the National Association for the Advancement of Colored People.

And in 1892, Dr. M.V. Lynk published the Medical and Surgical Observer, the first medical journal for “Negro” physicians, on Beale Street.

On Beale Street, African Americans found a soul force to endure the pathos of a toxic society and the residue of slavery. That “soul force” is “somebodiness” and a positive self-regard.

In the aftermath of the assassination of Dr. Martin L. King Jr. in Memphis in 1968, Beale Street was dealt a morbid wound by the concepts of urban renewal in the 1970s. Buildings were gutted and abandoned. Bustling crowds were diminished to a scarce few.

The music stopped on Beale and relocated. The legendary Gate Mouth Moore visited his old stomping grounds in the early 70’s and wrote a song: “Beale Street is gone and Beale Street ain’t Beale Street no more.”

The kitchens were closed, lights were turned off and Memphis – erroneously – announced the death of Beale Street. The premature obituary notwithstanding, tourists kept coming and inquiring.

“What happened to Beale Street?”

Abe Schwab resolved to keep his dry goods store open and serve his loyal customers base. He was asked why.

The attitude of defiance and determination sustained Beale Street through its most challenging time. In many instances, some of the city’s leaders acted like modern day Pontius Pilates. Like the biblical figure, they seemed to be trying to wash themselves of a martyr’s blood, in this case using urban removal.

However, the essence of Beale Street was not in the buildings. It was in the souls of all who drank from the refreshing waters of affirmation and transformation. That fountain was only on Beale Street for African Americans of the Greater Mid-South.

Beale Street still is talking. Today it stands with opened arms, beckoning the world to come, see and taste “Soul.”

Beale Street is too important to the history of African Americans to be trivialized in a movie title.

The false expectations created by the movie title, “If Beale Street Could Talk,” lead me to seriously propose to City Fathers and all stakeholders that the brand “Beale Street” be copyrighted – immediately.