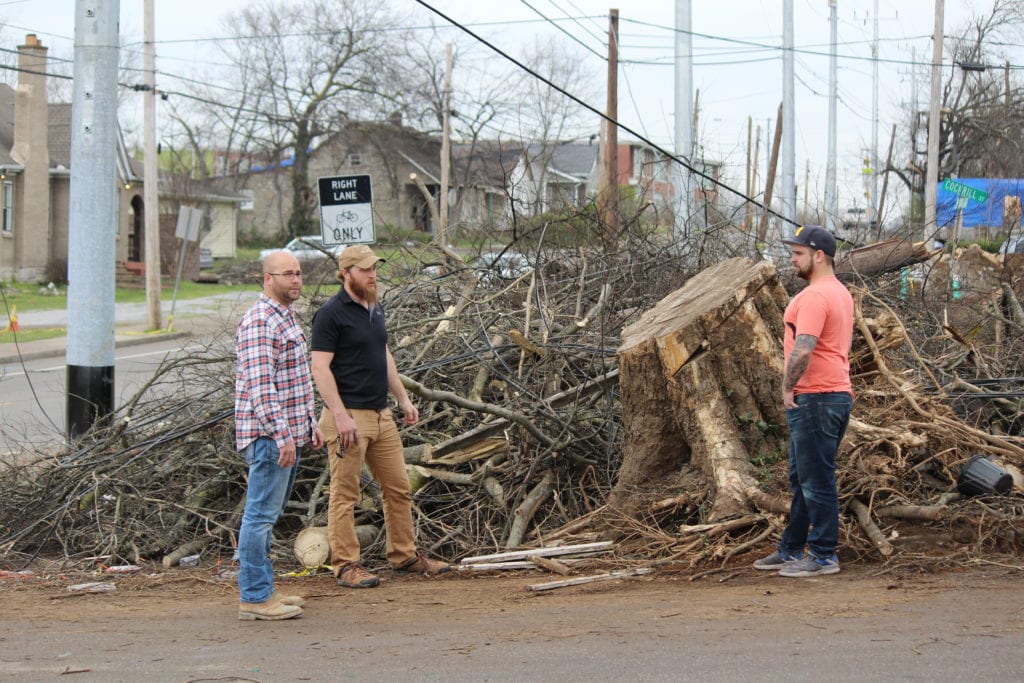 At about that time, public works storm debris operations were suspended because of emergency orders to contain the coronavirus, although a private demolition landfill continued to accept truck loads of debris.

Josh Murphy and Scott Moran have heavy equipment to remove debris from the March 3 storm, but they were stymied by rules that come with federal funds. To measure need, debris must be weighed. Volunteerism cuts federal spending.

“The Public Works director told us he wouldn’t let us use their staging areas, otherwise we’d have dumped it where they were weighing it,” Murphy said.

“Metro … abides by .. FEMA regulations concerning debris management to maximize federal reimbursements on behalf of our taxpayers, as all local and state governments do during disaster situations,” Song said, referring to the Public Assistance Debris Management Guide [a 260-page FEMA document, and] FEMA Region IV External Affairs.” While not stated by Song, it seems that federal relief exceeds payment for contracted removal of debris.

One FEMA contractor here was Lawn + Rescue. Its truck has Florida license plates. There was no reply to messages left at a Dade County, Fla. phone number painted on the truck.

“Dumping fees are the big thing,” Moran said. He and Murphy cleared streets within a week of the tornado; leaving roadside piles of debris.

“Lee Chapel will take care of the dump fees,” the Rev. Dr. Harold Love Jr. said. The Community Foundation of Middle Tennessee is the benefactor. Lee Chapel AME Church received $30,000 from the foundation.

Love consulted various church leaders, concluding, “This would be an appropriate use of these funds … for an expedited removal” of debris.

“I’m aware that the city and state are dealing with a multitude of challenges right now with the coronavirus,” he said.

Metro Councilman Brandon Taylor said, “We should be able to use the volunteers.” Taylor says he: sought restoration of electric service; acknowledged Hands on Nashville’s help with volunteers; knows about Murphy and Moran’s desire to help; and acknowledged debris must be measured.

Taylor focused on helping “those who didn’t have a place to live.” He referred Murphy and Moran to the mayor’s office. If Taylor were mayor, he’d “find a way to make it work.” His day job is as a “non-profit professional.” Turning volunteers away is counterproductive, he said.

With the $5,000, “We have enough for one day of operations,” Murphy said. Storm debris will be taken to a landfill “on the west side of town,” he said.

To improve the business and remove storm debris during March, 615 Holdings “bought two pieces of equipment” valued at $135,000 each, Murphy said.

Murphy’s home had a blue tarp on its roof across 25th Avenue North from St. Matthews Missionary Baptist Church.

“We’re going to clean up as best we can, as soon as we can,” Moran said when rain delayed work in mid-March. “We’re not looking for money. It’s so people can rebuild.”

Orange Doesn’t Have to Be the New Black

Coronavirus Here Not as Bad as in New York City