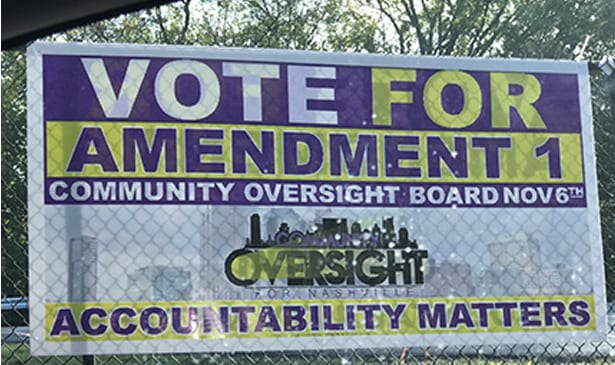 NASHVILLE, TN — A referendum that would establish a Community Oversight Board for the Metropolitan Nashville Police Department is on the ballot and groups on both sides are rallying voters to decide its fate.

Amendment 1 would establish a Metropolitan Government of Nashville and Davidson County Community Oversight Board that would consist of 11 members.

The amendment has sparked heated debate and groups are using advertisements and grassroots efforts to reach voters before the November 6th election.

Signs urging voters to “Vote for Amendment 1, Community Oversight Board, Accountability Matters,” or “Stand Up for Public Safety, Vote NO Amendment 1, Support Your Local Police!” are popping up in communities throughout Davidson County.

Theeda Murphy who represents the group Community Oversight Now, which is behind the signs urging voters to vote yes for the amendment, said voters are excited to have Amendment 1 on the ballot.

“What we are seeing is a lot of enthusiasm from people all across Nashville who are excited to be able to go out and vote,” Murphy said. “For once they have something to vote for and they are excited about it.”

If established, the Community Oversight Board can recommend that discipline be given when it finds a basis to believe that an officer has committed misconduct. The board would also have the option of forwarding findings of criminal misconduct and civil rights violations to the District Attorney, the Grand Jury, or the United States Attorney.

Murphy said the NAACP and other organizations have been advocating for the establishment of a Community Oversight Board in Nashville since the 1970s. Community Oversight Now was founded for the sole purpose of establishing a board. The movement gained traction after the February shooting death of Jocques Clemmons by MNPD officer Joshua Lippert and the shooting death of Daniel Hambrick by MNPD officer Andrew Delke in July.

Groups who oppose the amendment have launched campaigns including a YouTube video that urges voters to “Vote no on the $10 million tax hike.”  Language in the amendment states the board must submit an annual budget request of no less than $1.5 million.  The Nashville Fraternal Order of Police and the Nashville Fire Fighters Association have both come out to oppose Amendment 1.

“We have a lot of needs across Metro Nashville but one thing we don’t need is another government board that would only be made up of people appointed directly by politicians,” International Association of Fire Fighters Local 140 President Mark Young said in a statement issued October 15th.

The Nashville Fraternal Order of Police, which is a police union, sued to block the citywide vote on a community oversight board and its leaders said Amendment 1 is biased against police officers and will waste tax payer dollars.

Murphy rejects the message that voting against Amendment 1 is a vote against police and said a lot of police officers support the Community Oversight Board. She said the Nashville Fraternal Order of Police does not represent all officers and is part of a larger organization that is providing financial support which allows them to purchase radio and television spots urging voters to reject the amendment.

“They have a lot of money but they don’t have what we have which is deep community reach and deep community support,” Murphy said. “They need to understand the issue of community oversight is something that is broadly supported. It’s crossing racial lines, it’s crossing class lines and it’s supported in every city.”

If passed, the board would be operational no later than January 31, 2019.

“It will make the public trust the police and cooperate with the police more than they do now,” Murphy said.

Early voting began on October 17th and election officials are seeing a large volume of voters casting their ballots in advance of the November 6th election. According to the Tennessee Secretary of State’s Office, more than 82,000 votes were cast in Davidson Count between October 17th and October 24th. Early voting ends November 1st.