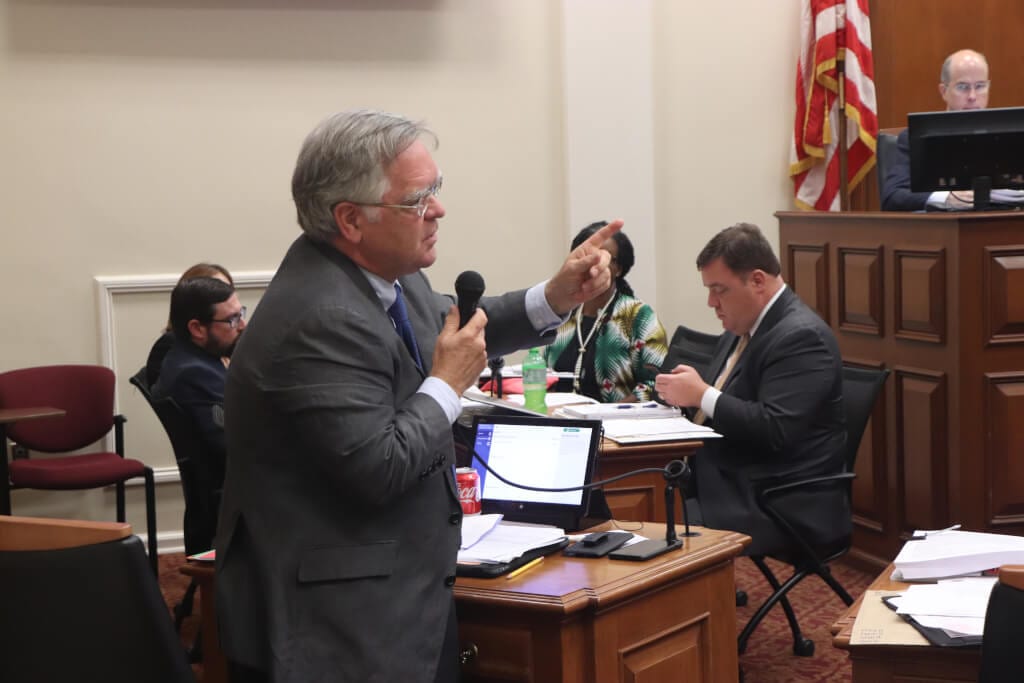 ”You can’t take away from the many to give to the few. That’s not something you should ratify,” said then At-Large Councilman John Cooper on August 21, 2018. He was inveighing against putting a MLS soccer stadium at the Fairgrounds. The City Council approved the deal September 4, 2018. Cooper was elected Mayor September 12, 2019.

NASHVILLE, TN – Three contracts awarded by the Metro Procurement office regarding the MLS stadium at the Fairgrounds are in jeopardy following allegations of bid-rigging, influence-peddling, and conflicts of interest.

Attorney Jim Roberts filed a complaint in Chancery Court last month. It is a follow-up on a previous lawsuit filed against Metro for violating the City Charter by gifting 10 acres at the Fairgrounds for a mixed-use development with a 99-year lease. The mixed development would likely net Nashville SC team owners several hundred million but guarantee Metro only $20 million and much, if not all of that, would come from parking fees which the Fairgrounds currently collects for itself.

Aside from the lawsuit’s 6 counts and the legal issues they raise, Save Our Fairgrounds and the Nashville Flea Market Vendors Association have long argued that the Fairgrounds is one public asset that never uses city operating funds. It’s annual $3 million budget is raised from events at the Fairgrounds. Even so, the three previous mayors before John Cooper have tried to bring public-private partnerships to the Fairgrounds that doesn’t need them to be successful.

How the Mob Came to Music City

Plaintiffs say City Hall, the Procurement Division of the Department of Finance, City Council, the Fair Board, the Sports Authority, and the Planning Department all got their hands dirty in the soccer stadium deal.

John Ingram is the principal owner of Nashville SC. Steve and Jay Turner own part of the team. The Turners and Ingrams are two of Nashville’s most distinguished families, well known for their philanthropy. Some other team owners are sketchy.

They are Zygmunt “Zygi” Wilf, his brother Mark Wilf, and cousin Leonard Wilf. The Wilfs own the Minnesota Vikings and are part-owners of the New York Yankees. They are big real estate developers who also invest in professional sports and sports betting. Mark Wilf became a Vanderbilt University trustee in 2016. John Ingram is also a Vanderbilt trustee.

The Wilf name is mud in parts of Morris County, New Jersey, where Judge Deanne Wilson ordered them to pay damages and attorneys fees amounting to $110 million for bilking two former business partners in a lawsuit that dragged on for 27 years.

In her 2013 decision Wilson said Zygmunt Wilf was guilty of “bad faith and evil motive“. She said the Wilf family was guilty of fraud, conspiracy, a pattern of racketeering, and the reckless and willful disregard of the rights of others. The judge basically called the Wilfs gangsters who didn’t use Tommy guns but robbed their former business partners with two sets of books. The Wilfs appealed and the payout was reduced to about $32 million. But the case was remanded (sent back) to Wilson’s court where racketeering charges are still pending.

Between 2013-2016 Mortenson, one of the firms that got the Fairgrounds stadium construction contract, built the U.S. Bank Stadium in Minneapolis for the Wilfs. In 2018, Denver news outlets reported that Mortenson used inside information to land a $250 million contract to expand the Denver Convention Center. The deal was scuttled and reportedly cost Denver taxpayers millions to rebid the job. Denver authorities have opened a criminal investigation in the case.

The latest Fairgrounds lawsuit claims much the same thing happened here. The complaint claims representatives of Ingram’s company, Nashville Soccer Holdings, and Icon Venue Group that has ties with the Wilfs, ingratiated themselves onto the evaluation committees that selected the contractors to do work at the Fairgrounds.

There is no better place to get inside information than sitting at the table where city contract decisions are made. Even better is getting to vote on who gets those contracts. People connected with Nashville SC did both and Metro officials let them.

The plaintiffs say various Metro departments and boards were derelict and broke the public trust. The complaint alleges that the winners of the three contracts are in bed with the Wilfs whose names do not appear anywhere on the Nashville SC website.

The winners of the three contracts were Kimley-Horn, Populous, and Mortenson. All three had previously worked for the Wilfs. That in itself is not a crime. But the plaintiffs claim they are merely soldiers in a conspiracy by team owners to rig the bidding.

Plaintiffs say Kimley-Horn was working on redevelopment of the Fairgrounds as early as 2016. Turner’s company hired the firm to do a Fairgrounds traffic study in 2018. Three years before, in November 2015, Populous released plans to move the Tennessee State Fair to Manchester, Tennessee. In short, Nashville SC owners had been eyeing the Fairgrounds to build a MLS soccer stadium for months, if not years, before the City Council approved the deal in September 2018. Afterwards, their business associates got the stadium contracts. That‘s pretty shady but is it illegal?

Sleeping With the Enemy

Chief Procurement Officer, Michelle Hernandez-Lane, let Nashville SC owners put their people either on the judging panels or in the room as technical advisors and that is a

violation of Tennessee state law and the Metro Code as well as the Metro Charter and Sports Authority Charter. Only Metro employees are supposed to be judges of contract proposals.

Proposal judges have to sign an oath to serve “in the best interest of the Metropolitan Government of Nashville & Davidson County as a whole”. The complaint alleges a conflict of interest exists between Metro and Nashville SC. The lawsuit’s main cause of action centers on having representatives of the team, or its affiliated companies, take part in the judging.

The complaint says such an obvious conflict of interest is serious enough to invalidate the stadium contracts because “Metro, acting on behalf of its citizens seeks to minimize the taxpayers’ cost burden and accept the lowest possible bid on construction costs”.

The complaint states that Nashville Soccer Holdings (NSH) wants to get the highest bid accepted “in order to minimize its investors exposure to construction cost overruns”.  Did Metro accept the lowest bid or the highest? Second highest.

Nashville SC team owners prevailed. Messer/Mortenson got the stadium construction contract for $167.5 million.  Barton Malow Company bid $160.5 million. The difference in their scores was less than 1%. The winner scored 96.75. The loser scored 96.0. Barton Malow contested the award. Their appeal was denied.

So much for the lowest qualified bidder getting the business. The contract award will cost taxpayers an extra $7 million. Nashville’s procurement office has a history of making dubious contract awards. See Greer Stadium

On his first day in office, Mayor John Cooper told reporters he was going to get to the bottom of what happened with the MLS Stadium deal but so far no heads have rolled.

The complaint alleges a conflict of interest also exists with the law firm of Bass Berry & Sims. They represent Metro as its counsel for issuing stadium bonds to pay for the stadium construction. But they are also legal counsel to Nashville Soccer Holdings, Ingram’s company.

In short, Nashville SC owners, their business associates, and Metro officials became so entwined in the stadium deal, and their relationships are so incestuous, it is hard to know where one ends and the other begins. They all seem to be standing in each other’s shoes.

The relief sought is to cancel all the contracts and put them out to bid again but this time with no outside parties involved in the judging.

In the meantime, Nashville SC is playing its 2019 season at First Tennessee Park, the Sounds stadium.