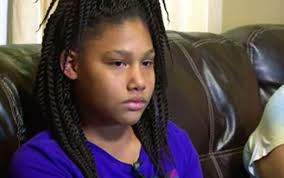 A police officer in Grand Rapids, Michigan should be reprimanded – and fired – for handcuffing a terrified 11-year-old girl at gunpoint and forcing her into the back of his squad car.

The incident happened on Dec. 6 but on Thursday Grand Rapids Police Chief David Rahinsky said the officer who handcuffed Honestie would not be disciplined even though Rahinsky said it was a terrible situation.

The girl, Honestie Hodges, was leaving her home in Grand Rapids and walking to the store.

In an interview with a Grand Rapids television station, Honestie said the experience was traumatic.

The police officer, according to the Grand Rapids police chief, will not be reprimanded, saying the incident was a case of “mistaken identity.” Police were looking for Honestie’s 40-year-old aunt, Carrie Manning, in connection with a stabbing. Manning is white. Hodges is not.

“No discipline will be issued,” Grand Rapids Police Chief David Rahinsky said in a statement on Facebook: “This, however, in no way diminishes our commitment to identifying what can be done to prevent similar incidents in the future.” Hollow words. Rahinsky let his cop off the hook.

The police officer’s behavior should be considered a crime and he should be removed from duty. There shouldn’t be a place on any police force for a cop who shows contempt and utter disregard for a child.

It also begs this question: Did the officer draw his gun and handcuff Honestie because she was Black? We may never know the answer to that particular question but I believe it’s fair to say that the cop doesn’t belong in a job where he interacts with innocent citizens.

In a police bodycam video, Honestie can be seen walking toward police officers – who were pointing guns at her – with her hands in the air.

Were the cops prepared to shoot an unarmed little girl?

“Listening to the 11-year-old’s response makes my stomach turn,” Rahinsky said at a news conference. “It makes me physically nauseous.”

“The juvenile was treated the same way we would have treated any adult, and when you’re dealing with an 11-year-old, it’s inappropriate,” said Rahinsky. “The screams of the 11-year-old, they go to your heart, you hear the mother yelling from the steps ‘that’s my child,’ and that’s our community’s child. That’s someone who lives in Grand Rapids, that’s somebody who should feel safe running to an officer.”

“Put your hands on top of your —,” an officer told her.

Another officer grabbed Honestie’s arms, pulled them behind her back and handcuffed her. “No! No! No!,” Honestie screamed.

“We are dismayed that there would even be the possibility of no disciplinary action on behalf of an officer, especially since the process of investigation and discipline is totally controlled by the Grand Rapids Police Department,” Rev. Jerry Bishop of LifeQuest Ministries told Grand Rapids news station WOOD-TV.

According to media reports, a similar altercation involving Grand Rapids police and children happened in March when cops stopped five young Black boys ages 12 to 14, as they were on their home from playing basketball. One of the officer’s drew his gun and ordered the boys on the ground. They were later released.

Meanwhile, Honestie said she was scared and no longer wants to wear a police badge.

“I didn’t know what was going on,” she said. “I didn’t do anything wrong, I’ve never got in trouble by the Grand Rapids Police. I used to want to be a Grand Rapids police officer,  but ever since that happened, I want nothing to do with them.”

“I really don’t feel comfortable around any cops,” the little girl said.

I don’t blame her.

What do you think?