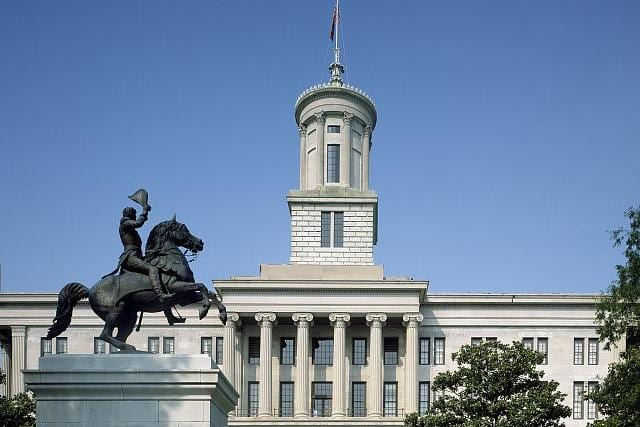 NASHVILLE, TN — For the fourth consecutive week, poor people, clergy and advocates will return to Nashville, as their historic reignition of the Poor People’s Campaign this week demands lawmakers ensure everyone in Tennessee has the right to healthcare and a healthy environment.
In Tennessee, the data tells the story of an unhealthy track record in our state:
This week the rally and direct action will focus on healthcare and environmental demands including:
The action in Tennessee is one of three dozen nationwide. In Tennessee the campaign is organized by the poor and dispossessed, clergy and those who care about justice from across the state, from Chattanooga to Memphis, in cooperation with Mercy Junction Peace and Justice Center, UAW 737, No Exceptions Prison Collective, Veterans for Peace, Christ Lutheran Church, Christ Church Cathedral, Murfreesboro Unitarian Universalist Fellowship, First Unitarian Universalist Church of Nashville and Greater Unitarian Universalist Congregation of Nashville.
WHO: Participants in Tennessee Poor People’s Campaign: A National Call for Moral Revival WHAT: Protest at Tennessee State Capitol.  demanding immediate action to protect the health of our planet and our citizensWHERE: Legislative Plaza, Nashville, TN WHEN: Monday, June 4, 2018, 2PM Rally, 3PM Action
BACKGROUND:
The Poor People’s Campaign: A National Call for Moral Revival is co-organized by Repairers of the Breach, a social justice organization founded by the Rev. Barber; the Kairos Center for Religions, Rights and Social Justice at Union Theological Seminary; and hundreds of local and national grassroots groups across the country.
On May 14, campaign co-chairs the Revs. William J. Barber II and Liz Theoharis were among hundreds arrested nationwide in the most expansive wave of nonviolent civil disobedience in U.S. history, kicking off a six-week season of direct action demanding new programs to fight systemic poverty and racism, immediate attention to ecological devastation and measures to curb militarism and the war economy. Last week, they were arrested again, alongside the Rev. Jesse Jackson after staging a pray-in in the rotunda of the U.S. Capitol. Hundreds more were arrested at capitols nationwide, including in Tennessee.
The protests from coast to coast are reigniting the Poor People’s Campaign, the 1968 movement started by Dr. King and so many others to challenge racism, poverty and militarism. The Campaign is expected to be a multi-year effort, but over the first 40 days, poor and disenfranchised people, moral leaders and advocates are engaging in nonviolent direct action, including by mobilizing voters, knocking on tens of thousands of doors, and holding teach-ins, among other activities, as a moral fusion movement comprised of people of all races and religions takes off.
For the past two years, leaders of the Poor People’s Campaign: A National Call for Moral Revival have carried out a listening tour in dozens of states across this nation, meeting with tens of thousands of people from El Paso, Texas to Marks, Mississippi to South Charleston, West Virginia. Led by the Revs. Barber and Theoharis, the campaign has gathered testimonies from hundreds of poor people and listened to their demands for a better society.
A Poor People’s Campaign Moral Agenda, announced last month, was drawn from this listening tour, while an audit of America conducted with allied organizations, including the Institute for Policy Studies and the Urban Institute, showed that, in many ways, we are worse off than we were in 1968.
The Moral Agenda, which is guiding the 40 days of actions, calls for major changes to address systemic racism, poverty, ecological devastation, the war economy and our distorted moral narrative, including repeal of the 2017 federal tax law, implementation of federal and state living wage laws, universal single-payer health care, and clean water for all.
Facebook Comments

Mixed Use Development/MLS Soccer Stadium” Should be How the Proposal Currently...