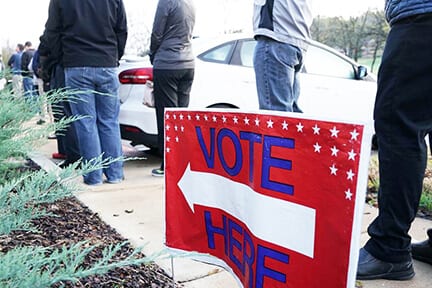 NASHVILLE, TN — The Lawyers’ Committee for Civil Rights Under Law, the NAACP, pro bono firm Hogan Lovells US LLP, Memphis-based firm Burch, Porter, & Johnson PLLC, Bromberg Law LLC, and community practitioner Daniel Ayoade Yoon filed suit today challenging Tennessee’s new third-party registration law. The complaint alleges that the law, which imposes burdensome requirements on persons and organizations who seek to help people register to vote, violates fundamental rights of free speech, free association, the right to vote, and due process. The suit was filed on behalf of the Tennessee State Conference of the NAACP, Democracy Nashville-Democratic Communities, The Equity Alliance, and The Andrew Goodman Foundation, all of whom engage in voter registration activities.

The law, signed by Tennessee Governor Bill Lee recently, introduces a whole host of restrictions on third-party voter registration groups. It requires them to comply with preregistration, training, and affirmation requirements or face draconian criminal and civil penalties ranging in the tens of thousands of dollars. The statute stiffly penalizes groups for actions of voters who do not satisfy a vaguely-defined requirement that registration forms be “complete.” The statute also criminalizes “any public communication” made by a third-party group to a voter about the voter’s registration status if it is not accompanied by a disclosure that the communication was not authorized by the Secretary of State.

“Tennessee’s law is one of the most restrictive voter suppression measures that we have seen this year. This is nothing more than a thinly veiled attempt to discourage and deter people from helping others to register to vote,” said Kristen Clarke, President and Executive Director of the Lawyers’ Committee for Civil Rights Under Law. “There is no basis for the law’s draconian provisions that will chill basic First Amendment rights. We will use every tool in our arsenal to fight a law that would undermine the work of voter registration organizations and advocates across the state. Tennessee has one of the lowest voter registration rates of any state in the country — lawmakers should be working to address this and instead have chosen to exacerbate the crisis.”

“While voter participation in Tennessee continues to rank among the lowest in the nation, the state of Tennessee has today taken unprecedented steps to make it more difficult – and risky – for individuals and groups to assist Tennesseans in registering to vote. Aside from having its priorities badly misplaced, the state’s actions conflict with some of our nation’s most fundamental ideals and, we believe, violate the U.S. Constitution. The NAACP is committed to having this badly flawed legislation overturned by the courts,” said Bradford Berry, general counsel of the NAACP.

David Goodman, president of The Andrew Goodman Foundation, said, “My brother, Andrew Goodman, died defending voting rights, and this legislation is an affront to his legacy. A healthy democracy requires the participation of all of its citizens, especially the younger generation. Yet we are witnessing an unprecedented assault on youth voter participation, as evidenced by restrictive and un-American legislation like H.B. 1079/S.B. 971, which criminalizes organizations that strive to enfranchise underrepresented groups. We should be encouraging more young people to vote, not discouraging them. The Andrew Goodman Foundation has and will continue to advance my brother’s work by ensuring that everyone has equal access to the ballot.”

“This case represents an attack on the fundamental right of Tennessee citizens to register and vote. This new Tennessee law opens a new chapter in state efforts to suppress minority votes, responding to the historic voter turnout of 2018 by seeking to impose burdensome and unnecessary restrictions on efforts to register minority voters. This type of law is blatantly unconstitutional, and must be stopped in its tracks before similar efforts expand across the nation,” said Ira M. Feinberg, partner at Hogan Lovells US LLP.

About the Lawyers’ Committee for Civil Rights Under Law