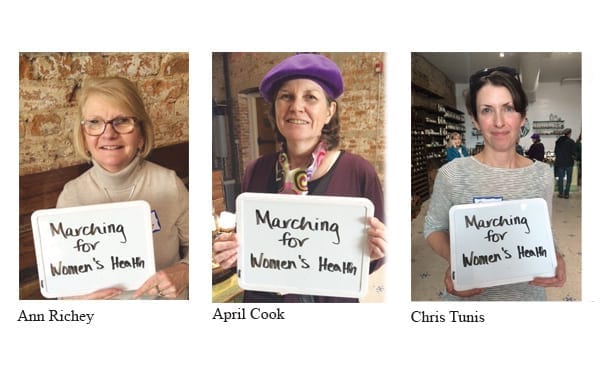 CHATTANOOGA, TN — Chattanooga women gathered at Wildflower Tea Shop & Apothecary on Market Street to share why they are participating in the Women’s March and to respond to Senators Alexander and Corker’s rushed repeal of the Affordable Care Act without a replacement, a move that would leave millions without health care and rip away key protections and benefits of the ACA for women which include: A ban on defining pregnancy as a pre-existing condition, A ban on insurance companies’ gender discrimination or charging women more than men, Increased access to free preventive care like mammograms and cancer screenings, Free birth control, Free annual well-checks for prenatal care and other life-saving preventive care, Maternity care, Screening and counseling for victims of domestic violence.

Ann Richey, a nurse from Signal Mountain, said, “I’ve worked since 1972 as a public health nurse in various rural/urban environments and still retain my active RN license in both Tennessee and Michigan. For 10+ years, I worked with pregnant and parenting teens in our county school system. I have worked with families coming from a broad spectrum of coverage: Medicaid, employer provided, Medicare, as well as non insured. It has been heart-breaking over the years to see preventable illnesses not resolved due to financial concerns.

“One example which haunts me to this day is a woman who could not afford to be evaluated for a large mass on her leg. She died of bone cancer, leaving behind several young children. My career focus in Maternal/Child Health, observing so many families postponing preventive care due to budget, has given me many reasons to be proactive about retaining the important aspects of ACA. Our country, and taxpayers as a whole, will grow strongest when we prevent illness, provide early intervention, and cover unexpected extreme health needs. A healthy population is an essential ingredient for a productive, forward-facing country. Can we afford NOT to follow through?”

April Cook, a retired nurse from Lookout Mountain, TN said, “my insurance has improved since passage of the Affordable Care Act. I benefited from the ACA’s removal of lifetime caps.  I wondered at one point when I was having a $12,000 surgery here and there if I would exceed the cap. If you have conditions it can add up in no time. We all know the community can be good during a disaster, but day in and day out, people need care. Preventive care is crucial. Taking care of something early rather than later is cost-saving and life-saving. Diabetes is another pre-existing condition that left untreated just leads to other issues — a kidney transplant and dialysis is so much more expensive than generic insulin.”

Ashley Saturday, a service industry worker and volunteer said, “After a major life change last year, I had no health insurance for eight months due to the high cost of COBRA continuation coverage that would have run $620/month. I would have qualified for the ACA’s Medicaid expansion, but that was blocked by our callous legislature in Tennessee, who decided to leave billions of taxpayer dollars lying on the table out of pure spite.  So I ended up in the nightmare scenario of having to choose between rent and healthcare. And because of the ACA’s exchanges, this month I finally was able to afford both.

“I benefit from mental health parity. Women’s preventive services. Free birth control. Paying the same for insurance as men, because ‘being a woman’ used to be a pre-existing condition.

This year, I’ve got a real shot at achieving my lifelong dream: striking out into business for myself and becoming fully self-employed, just like my dad. It breaks my heart to think of how many people before the ACA were prisoners in jobs or other life-circumstances they hated, but couldn’t escape because they couldn’t be sure they would still have healthcare on the other side. This isn’t just about keeping my dreams alive. It’s about keeping that American Dream alive.

“I am marching in D.C. to peacefully protest the undermining of American democracy by an incoming oligarchic administration and to protest the normalization of sexual assault by the President Elect.”

Therese Tuley said she is marching in Washington, “because healthcare is a right — access should not be tied to workplace. Single payer option, please!”

Chris Tanis spoke out defending women’s healthcare, “there are so many women’s health issues to be concerned about with the repeal of the ACA. Pre-existing condition coverage, coverage of young adults on their parents’ plans until age 26, contraceptive coverage… what I’m most concerned about is we have not seen a plan, so we can’t even understand what’s coming our way. What is being promised just doesn’t seem possible.”