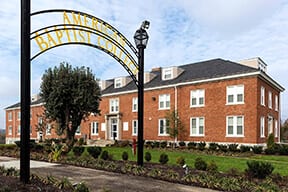 NASHVILLE, TN — American Baptist College graduates strive to uplift and be uplifting, according to Provost for Academic Affairs, Dr. LaShante Walker. Shane’ Carter, a U. S. Army Veteran will receive her degree at the 2019 graduation ceremony.  The 1989 White’s Creek graduate, chose to follow her twin brother to the armed forces in 1990 and was honorably discharged in 1993.

She began her academic matriculation at ABC in Fall 2013 and withdrew in the Spring of 2015.  She returned in the Fall of 2017 and will graduate this May with a Bachelor’s Degree in Entrepreneurial Leadership.   “I love American Baptist College,” said Carter.  “This college opened my eyes to issues of Social Justice and I was willing to fight when I faced injustices,” she added.

While working in federal government, she experienced racial physical injustices.  “A co-worker said he was going to put a noose around my neck.  He took his belt and mimicked the hanging action on my neck.  I was horrified and angry.  I quit my job and sought legal assistance.  I could not find a lawyer in Nashville that would take my case.  I found one in Atlanta and we won,” she said with satisfaction.  She has just been accepted to Vanderbilt Divinity School and will enroll in the fall, seeking a Master of Divinity in Theological Studies.  She has a passion for helping people and she hopes to one day become a Christian Counselor. One of her favorite quotes is from “Injustice anywhere is a threat to justice everywhere. We are caught in an inescapable network of mutuality, tied in a single garment of destiny. Whatever affects one directly, affects all indirectly.”

Mrs. Carter is married and has one son and two grandchildren, all of whom are extremely proud of her.

Graduation will also allow another student to shine brightly from the flame that was almost snuffed out during his teenage years. Rahim Buford, a committed social activist, who has a heart for the people will receive his bachelor’s degree in Entrepreneurial Leadership.

Rahim was having some life challenges being rough and tough as a teenager.  During his senior year at Hunters Lane High School, he was arrested and went to prison. He was incarcerated from May 5, 1989 to June 25, 2015. During those 26 years he was housed at eight different prisons and in solitary confinement for 28 days.

While at Riverbend Maximum Security Center, he was taking classes from the Vanderbilt Divinity School and one class was taught by Dr. Forrest Harris, who has a dual role as President of American Baptist College and Director of the Kelly Miller Smith Institute at Vanderbilt.  Dr. Harris taught ‘Race, Religion and Ethnicity in America’ and Rahim was one of his students. “This was the best class I had ever taken,” said Rahim.  During the course of the class, Dr. Harris told him, “When you get out, you have a scholarship to attend American Baptist College.”  Dr. Harris made good on his promise.  Rahim explains, “Dr. Harris did not say, if you get out, he said, ‘when you get out’ and was true to his word.  I have been at American Baptist since 2015.”  He first took two classes per semester, then three, then four.  He has been on the President’s List/Deans List since he started taking the required number of courses.  He will walk proud during graduation ceremonies to receive his coveted diploma. “Knowledge took me on a journey within myself.  I wanted to experience what that journey could do,” said the proud graduate.”

“Rahim has excelled academically and this strong academic foundation will help him to continue to develop as a productive citizen in our society,” stated Dr. Walker. Rahim has a podcast that focuses on Social Justice and Equity and tells his story.

ABC will hold its Baccalaureate Service Wednesday, May 15 at 7 p.m., at Mount Gilead Missionary Baptist Church, where Pastor Breonus Mitchell, Sr. serves as Senior Pastor of the 1200 -member congregation.  The church is located 901 Acklen Ave., Nashville.  Pastor Mitchell also serves as President of the ABC National Alumni Association, and will be the keynote speaker at the Baccalaureate Service.

A highlight of the graduation program at Fifteenth Ave. is the veteran’s ceremony. “This part of the program will provide special recognition to those who have served the country and now will serve from a theological and social justice perspective,” said President Harris.  Additionally, awards will be presented in a variety of categories.