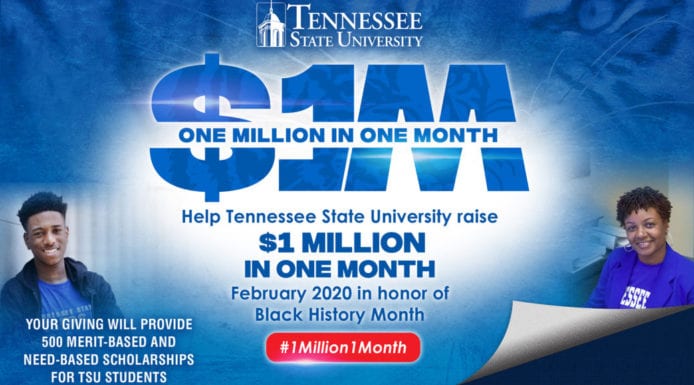 NASHVILLE, TN (TSU News Service) — Tennessee State University’s Big Blue spirit is shining through. The university is a little over halfway through its campaign to raise $1 million this month for student scholarships, and it’s already received more than $750,000 in contributions.

“We’re very excited about where we are. Enthusiasm is high!” says Jamie Isabel, a TSU alum and the campaign’s chairman. “I believe we will be well over $1 million once we complete the campaign on Feb. 29.”

Money raised from the campaign will provide both merit-based and need-based scholarships for TSU students. Approximately 500 scholarships will be awarded to students in an average amount of $2,000. About 90 percent of TSU students receive some form of financial aid.

TSU alum Charles Galbreath of New York City is among the many alumni who have contributed to the campaign. 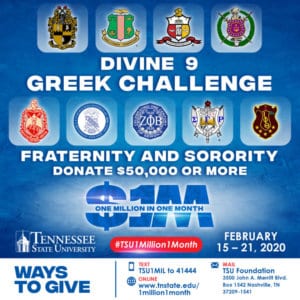 we leave,’ says Galbreath. “I think that the energy that everyone is coming together with is everything we learned at TSU; that Big Blue spirit, to continue to take care of our school even after we’re gone.”

“Every year we have students that need financial means to stay in school, and it’s important for alumni to give back so that our kids can graduate from our esteemed alma mater,” says Kerr, who has also donated to the campaign.

Senior Jaquice Gross will be graduating from TSU in May. But he says some of his fellow students will not because they had to drop out for lack of funds to stay in school.

“In order for these students to actually make a change in the world, you’ve got to give them the opportunity to do it,” says Gross, a criminal justice major. “Who knows, they might even be the next President. So give them that chance, donate!”

Olivia Bohanon, who also plans to graduate in May, says she understands the importance of having enough money to stay in school.

“My family didn’t have the money for my college education, so I depended on scholarships and grants to attend Tennessee State University,” says Bohanon, an English major. “And even if they do have a scholarship or some type of federal aid, sometimes students need a little more to help make ends meet. That’s why the $1 Million in 1 Month campaign is so important.”

The campaign to raise $1 Million in 1 Month during Black History Month laid the foundation for the historic partnership between TSU and the National Hockey League’s Nashville Predators. It is the first known partnership between an HBCU and the NHL, and coincides with the league’s Hockey is for Everyone initiative in February.

The Predators organization made the first donation to the campaign, as well as an additional $100,000 of in-kind assets to help spread awareness to the initiative, which includes providing TSU students with internships.

“With the help of the most passionate fan base in all of sports and the Nashville Predators organization, we are proud to partner with Tennessee State University on this life-changing education initiative,” says Predators President and CEO Sean Henry.

In addition to the kickoff event with the Nashville Predators, the university has worked to engage the TSU family with various challenges. The Alumni Chapter and Faculty/Staff Challenges were held earlier this month. The Alpha Theta Chapter claimed victory with a contribution of over $16,000. Gifts for the Staff/Faculty Challenge are still being calculated.

Campaign activities for the rest of the month include TSU Divine Nine Fraternity and Sorority Challenge Feb. 15-21, where each Greek organization is asked to donate $50,000; the faith-based community is asked to participate during TSU Sunday Day of Giving on Feb. 23, along with the Dialing for Dollars telethon that evening; and the TSU College Challenge, the final campaign challenge between the eight academic units Feb. 22-29.

Due to COVID-19, TSU Staff Begin Teleworking to Ward Off Spread