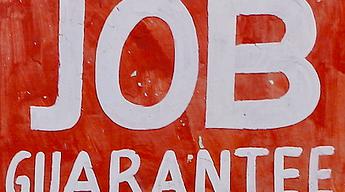 What if I told you that you were guaranteed a job making $15 an hour, paid sick leave and health benefits?  Some think this is a bad idea and promotes a purely socialist society.  After all, we need poor people to stay poor in order for advantaged people to stay “advantaged” right?  Senator Cory Booker has proposed a bill that ensures all adults who want employment to get it.  The Federal Jobs Guarantee Development Act would establish a three-year pilot program whereby the Department of Labor would select 15 local areas and offer that area funding so every adult living there is guaranteed a job of at least $15 per hour or the prevailing wage for the job.

This is a proposal that will end recessions in America.  Typically, when the economy hits a recession, the government injects a monetary stimulus (cutting interest rates) or a fiscal stimulus (boost in spending and tax cuts).  Ten years ago, this is what the government did, and it took 10 years for unemployment rates to get back to normal and we are still recovering in the African American community.  Job guarantee advocates argue this will create a permanent form of fiscal stimulus and politicians will not have to act in an ineffective way in the future.

Advocates also believe this proposal would be beneficial during the “prosperous” times like we are experiencing now.  The economic boom is not being felt evenly throughout America.  As of March 2018, 60.7 % of white people were employed while 58.4% of African Americans are.   27.7% of people with disabilities between the age of 16-64 were employed compared to 72.8%of nondisabled people.  Just think of all the talent and perspective our businesses and our economy are missing out on.  The prosperity is not evenly distributed geographically either.  There are 337 counties(parishes) with a combined labor force of over 6 million people with unemployment rates of 7% or higher as of February this year.  78 counties have unemployment rates more than 10%.

Supporters also believe this will lead to overall wage growth.  Wage growth during these prosperous times still seems to be sluggish.  The big tax cut was supposed to lead to wage growth but other than some measly bonuses for a few, most still have not seen any benefits.  If workers making $10 per hour left those jobs to make $15, businesses would have to increase their wages to keep them.  However, many people argue that would raise prices.   Still, prices continue to rise without any wage increases.

A rising tide lifts all boats.  If you do better, then I do better.  If they do better, we all do better.  People that get government assistance do not keep me from being successful.  The only person that stands in my way is me.

If you have ideas on how to do better and capitalize on your opportunities, please feel free to contact me thomsustainableconsulting@gmail.com.  Or you can follow me on Twitter @tcsheff.  #Resist #Wordsactionchange