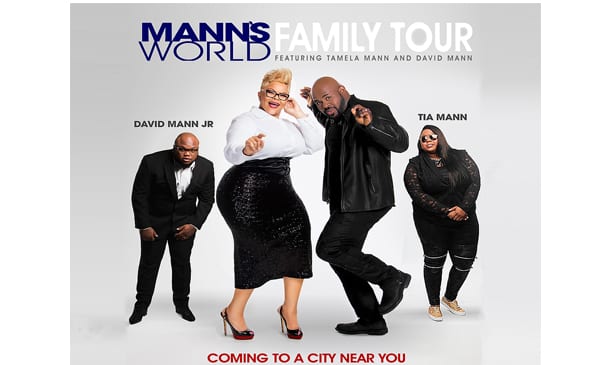 Tamela recently received her first Grammy® Award for Best Gospel Performance Song for “God Provides” from her Billboard No. 1 album ‘One Way.’  Her 2017 Dove Award-winning song “Change Me” continues to hold the #1 slot on the Gospel Billboard chart for the 14th- straight week! She’s also been recently nominated for a Soul Train Award.

From starring in the No. 1 TV and film franchise, Tyler Perry’s Meet The Browns together, to their current television hits, Tamela and David continue to make audiences laugh with their wholesome brand of comedy. The couple currently stars in ‘The Manns’ (TV One) and ‘Mann & Wife’ (Bounce TV).

We’ve met ‘The Browns’ so now let’s meet the Manns away from the lights, glitz, and glamour. The Tribune spoke to David and Tamela last week during their recent visit to Nashville, shortly before boarding their flight. It was a chat filled with lots of laughs and some insight as to why the Manns are one of Hollywood’s most successful show business couples. This week it’s 5 Questions-plus because, with David and Tamela, the fun and laughter have no limits!

TRIBUNE: So how did the whole idea for the family too – because you’ve got your son and your daughter, so how did this all come about? Tamela: Well, the family’s together all the time, and our kids grew up around the stage. And so, they’re all talented in their own right, so I was just like, let’s just put it together where everybody’s out, and we’re all out together. We do the full tour, bring the kids – my son, he DJs, he starts the whole party off, like a big ‘family reunion’ we call it, and my daughter, Tia, the baby girl, she does like her own twist on some gospel favorites. So, she does it in like a neo-soul style way, and she does a few covers, and then I come out and do standup, and Tamela takes us home.

TRIBUNE: You guys are definitely an entertainment power couple. What is the secret to staying together like this for so long? Tamela: We like each other, and we’re in love, and we enjoy each other’s company, and that’s the thing is, we just want to encourage other marriages and families, that’s why we really did the family tours, to encourage families to stay together, and to do things together, and get back to the basics. But we’re in love, you have to stay in love.

TRIBUNE: What’s the most romantic gift Mr. David has ever gotten you so far? Tamela: Romantic gift? All of them. I’m not real picky. David: She’s not. She loves flowers. I can bring her some roses home, and it’s like I just got her a new car or something.

Tamela: Yeah, I’m pretty simple. When I do ask for things, it’s a mighty big thing.

Tamela: Yes. But honestly, I’m just really grateful that whatever I kind of ask for, he kind of makes it happen. It’s really been a blessing.

TRIBUNE: Out of all the wild and crazy Mr. Brown outfits, and you know those colors weren’t clashing, they were warring with each other, what is the most memorable outfit? David: God, that’s a tough one. I think one of my favorites would be – well, it’s a group of them, like the onesies. The full onesies. I used to love it when they would bring me those to the set. Number one, they were warm. The full onesie, you just never knew –

Tamela: I think the favorite one for me would be when he ate the muffin and he went back in the seventies, he thought he was really like a jock.

David: It’s a lot of them. Now that I think about it it’s like, wow, we did a hundred and forty episodes.

TRIBUNE: You guys don’t have those outfits in storage anywhere at home? David: Not at home, but they’re in storage.

Tamela: They’re at the studio.

TRIBUNE: TRIBUNE: We are now in the holiday season and we’re coming into Thanksgiving, so who’s the cook at the Mann’s house? Tamela: Actually, both of us, just like you said. Because we both love to cook.

David: I’m the griller. Put me on the grill, I do my cook. She can do it all, she’ll tell you. She can’t work the grill.

David: She can’t out-grill me.

Tamela: That’s just because I didn’t want to master that one. I let him handle that.

TRIBUNE: That’s what a good wife she is. David: She didn’t want to show me up. Is that what you’re saying?

TRIBUNE: Well, I’m from Dallas also, so I know how grilling and guys are. You just don’t touch a guy’s grill. It’s like touching a guy’s radio. David: I have four grills. I have one for everything – grilling for steaks, grilling for this, and so there’s a grill for everything.

Tamela: He likes it, so really, honestly, he is the griller, but we both do stuff inside. When it comes to the kitchen, we in there.

David: Thank you for chatting with us Janice. Hey Nashville, make sure everybody comes out and see the show, Mount Zion, November 18th at Mount Zion Church, where our friend Bishop Walker is the pastor. We’ll be looking for you Nashville!

5 Questions With Colton Smith, The Voice