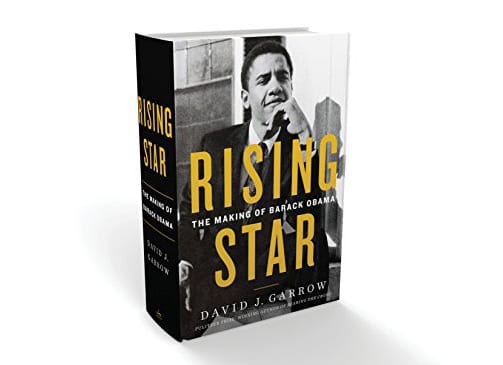 “Barack Obama’s speech at the 2004 Democratic National Convention instantly catapulted him into the national spotlight and led to his election four years later as America’s first African-American president. In this penetrating biography, David J. Garrow delivers an epic work about the life of Barack Obama, creating a rich tapestry of a life little understood, until now…
In Rising Star, Garrow has created a vivid portrait that reveals not only the people and forces that shaped the future president but also the ways in which he used those influences to serve his larger aspirations. This is a gripping read about a young man born into uncommon family circumstances, whose faith in his own talents came face-to-face with fantastic ambitions and a desire to do good in the world.”
— Excerpted from the Bookjacket

Now, another Pulitzer Prize-winner, David J. Garrow, has published an epic opus of 1,472 pages on the life of Barack Obama, focusing on the years prior to the presidency. And it’s a safe bet that Garrow just might eventually write a sequel about about POTUS 44’s time in the White House, too.

Any Obama fan is likely to find this in-depth portrait fascinating, as it is filled with plenty of little-known factoids and anecdotes about him. For example, it chronicles a childhood spent mostly on Hawaii where he was basically raised by his maternal grandparents in the absence of both his mother and father.

Garrow also documents “Barry’s” use of marijuana in high school and of cocaine in college, when he started preferring “Barack.” And the author reveals the identity of the woman Obama lived with for a couple of years during his stint in Chicago as a grassroots organizer.

We also learn that Obama not only worked with a lot of Bible-thumping sisters during his initial stint in the Windy City, but that he was already planning to become president of the United States way back then. And there’s the blow-by-blow of his strained relationship with Genevieve Cook, the rudderless white woman he dated during his tenure in New York City.

Everything you always wanted to know about Barack Obama but were afraid to ask, and then some!