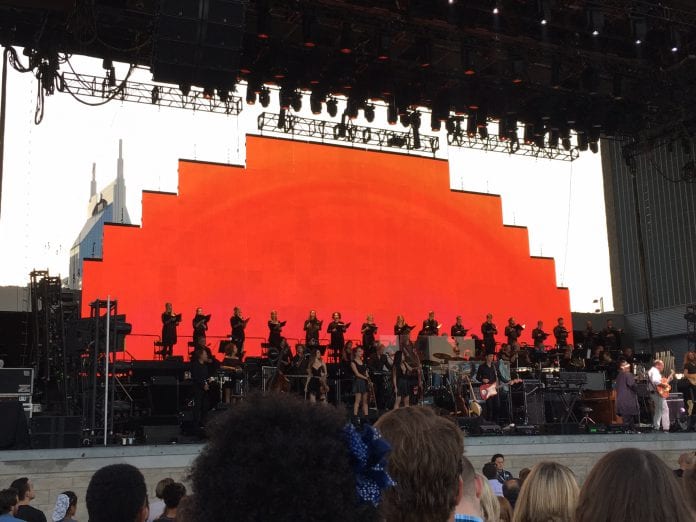 Movie composer extraordinaire Hans Zimmer and his musical entourage rocked Music City July 16 at Ascend Amphitheater. Onstage were Zimmer’s electrifying band, a studio orchestra and a choir performing music from Lion King, Pirates of the Caribbean, Man of Steele, Wonder Woman, Batman Begins and Interstellar, just to name a few. It was a picture perfect summer night with the downtown skyline painting the evening sky. His creative energy was felt not only through the music but through stories behind some of the classics. The audience was fully engaged as the illustrious maestro shared some of the inspirations behind movies such as the Da Vinci code, where he was given the opportunity to spend solo time in the Louvre. Zimmer would be in the Paris museum after-hours, the perfect opportunity to ignite his musical imagination.  He would stare at the Louvre Pyramid outside, and would be mesmerized by its modern glass structure contrasting against the classic architecture of the French museum.

Zimmer spotlighted musicians throughout the night including Lebo M. who is a powerful lead voice for one of theLion King soundtracks. The African performer was a former political refugee washing cars over two decades ago. Zimmer heard his voice and since then, he has become part of his band. Hisadult daughter is now also a part of the band. The audience felt the authenticity and warmth of the composer.

The crowd roared as the film score of Batman beginstook the stage. TheAT&T tower aka the “Batman Building” served as the perfect backdrop against the summer night sky. Zimmer shared how he got a call from Christopher Nolen who, at the time, didn’t know this would evolve into the Dark Knight trilogy. Zimmer paid special tribute to Heath Ledger and shared about his brilliant performance in the Dark Knight. After hearing of his loss, the composer contemplated whether to still keep the edgy sounds, which are heard during some of his scenes. They ended up remaining as he felt it captured the sheer talent of the great actor.

Also during the Batman segment, Zimmer shared of a call he received from a reporter following the Batman preview about the 2012 shooting in Aurora, Colorado. He had just landed in London and was devastated to hear about the losses. He channeled hisheart-ache into a song called “Aurora,” carrying the Batman sounds.

The screen behind the musicians captured the energy of the sounds through visual graphics. From abstract waves during Pirates of the Caribbean, to an orange sunset for Lion King to psychedelic shapes for Man of Steele, the show felt like the total package. It was no doubt among the best shows for all ages to enjoy.

Hans Zimmer’s film score success dates back to 1988 when he was asked to be a part of Rain Man. The end result was his first Academy Award Nomination for Best Original Score. Since then, he has composed music for over 150 films. Zimmer has received four Grammy Awards, three Classical BRIT Awards, two Golden Globes, and an Academy Award.

India.Arie to Perform at The Schermerhorn