NASHVILLE, TN — It will be an evening of great music, complete with a festive atmosphere for the holiday season, as composer/producer/instrumentalist Bryard Huggins will be performing a concert in promotion of his latest album CALHOUN STREET. The show will take place December 2, 2017 at the Noah Liff Opera Center 3622 Redmon St. Nashville, TN 37209.

Joining Bryard as his special guests will be his own band, along with some of the city’s most talented performers.

Calhoun Street is the fifth album project from this multi-talented young 23-year-old performer, who happens to be a Nashville native. The new album is filled with music that’s uplifting, cool and melodic. It offers that feel good-mood effect to listeners, whether it’s the holidays or any day. According to Huggins, the collection of songs featured such as: ‘Empire City,’ ‘Song for Lay’ ‘Back to New York’ (feat. Léa Verlin) and others, were created during his four years as a college student at College-Conservatory of Music in Cincinnati, OH. He graduated cum laude in his class earlier this year. “My apartment during my sophomore, junior, and senior years, was located on Calhoun Street, which is a very popular street in Cincinnati.  So, all of the songs that are on this album were written when I lived on Calhoun Street,” recalls Bryard. These are all original songs. I describe them as being a mix between jazz and jazz-pop fusion. There’s also two vocal tunes that are more along the pop-jazz and folk genres,” he adds.

Bryard’s talents go far beyond the genres of jazz and creating recording album projects. He also composes world-style music, film scores, orchestra, new age, children’s music, and gospel music. His sound has been praised by some of the best top-name performers from a variety of genres: “Seeing and hearing Bryard brought back so many great memories of me at age 19, a student [and musician] at Howard University. Keep pressing forward with your gift, as it was given to you by purpose and design! Keep up the good work! “-Richard Smallwood (Award-winning gospel artist)

“Bryard is up to something really big! Impressive, keep it up!”

Growing up in Music City as a student at the University School of Nashville, Bryard was heavily influenced by household name performers such as  George Duke, Yanni, Brian Culbertson, David Benoit, Joe Sample, Oli Silk, and Snarky Puppy to name a few. But it was the music and style of internationally acclaimed Greek producer/composer/keyboardist Yanni that inspired him the most. “I just love Yanni,” shares Huggins. “He’s an amazing composer, he’s probably one of my biggest influences – I know he doesn’t do the jazz, I don’t solely do just jazz either… I love Yanni’s way of composing, interpreting and performing, and also his stage presence…I’m constantly getting ideas from musicians like Yanni and others because I’m never off the clock working. My brain is going 24/7, 365, composing, thinking of stuff as I’m walking to the mall, or I’m out of town, something is happening in my mind, so I never get a day off from this.” 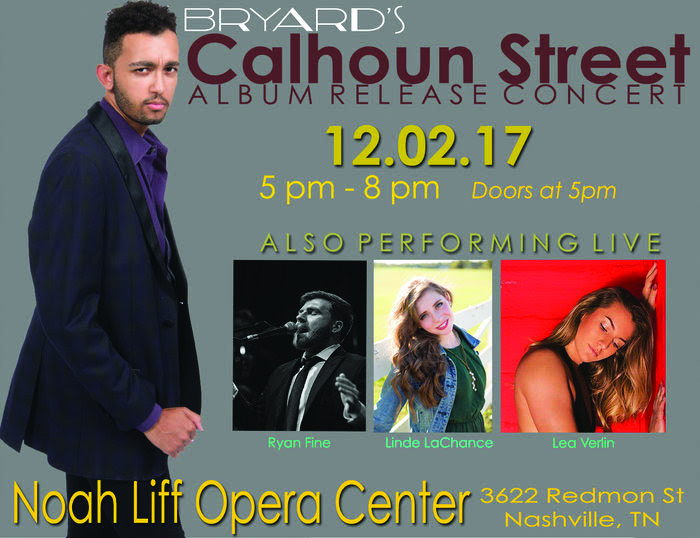 If it sounds as if Bryard is consumed by his love for music, he really is and that’s because this young millennial performer is a child prodigy. He’s walking into his own authenticity and doing only what comes naturally to him. According to Huggins, he was about four-years-old when his family first discovered that he had this natural affinity for music—particularly for the piano. One year, his dad bought a piano for his mom as a Christmas present, but little did they know what an impact this gift would have on bringing out the music gift of young Bryard.  He says: “Music started with me at a very early age in life…During the holidays, my parents used to play the Vince Guaraldi Peanuts Christmas CD. I later used to mock and play that by ear…Also, my mom played the piano when she was pregnant with me and my brother, who is also a talented musician. She used to play the Pathétique Sonata for us. One day, my parents were in the kitchen washing dishes, when all of a sudden, they heard these melodies coming from the piano. They thought it was coming from the TV. But it was me playing the piano! (he laughs) My feet couldn’t even reach the floor. I was just kicking my feet, just playing melodies. That’s where it all started with me and music. And that’s when everyone realized music for me is definitely a God-given gift.”  By age six, Bryard was taking piano lessons from a private instructor at Belmont for ten years. He later switched to a jazz teacher throughout his high school years.

Throughout his young life, Bryard Huggins continues to use those divinely inspired gifts to create music. In addition to his current Calhoun Street album, Huggins has released a total of five albums, three singles, and two children’s albums. In 2015 Bryard composed and produced music for former Nashville resident Gloria Respress-Churchwell’s Butter Pecan Productions LLC., a children’s book company.  The album was recorded to accompany the company’s first book ‘Savannah and Me.’

Bryard obviously has unyielding talents when it comes to diversity in his work. He’s composed for orchestras and for Broadway; he composes for symphonies, TV commercials, and film scores. In fact, he’s currently working on an upcoming Broadway musical that’s in the works.

He says that his hope for listeners who attend his upcoming December 2nd concert, and those who purchase his new album, is to see that his talents have no boundaries. “The take away that I want people to see is that\ it’s not just Bryard Huggins the pianist they’ve known for the past six years–it’s Bryard as a composer too. The audience will see that all of these songs are in different styles. It’s a colorful mosh pit of music that I do, and it’s not exclusive to just one genre or just one instrument. I’m twenty-three, and I’m ready to do this for the rest of my life!”