NASHVILLE,  TN — The pioneering African-American women journalists were true trailblazers in Nashville. It took an inordinate amount of perseverance for black women to break into white male-dominated fields. As broadcast journalists, Black women have endured racism, sexism, and criticism about everything from their skin tone and hair, to their diction.

day to deliver the latest developments in “It” city and around the world. In many cases, they are the first faces we see in the morning, and many times the last faces we see at night. And in that way, their presence in our lives is expected, and losing them is not a good feeling.

Anne Holt is one of 13 children born to a family of sharecroppers in West Tennessee. She received her education from the University of Tennessee in Knoxville and immediately went to work for the local television station, WATE-TV. Anne moved to Nashville in 1976 and went to work for News 2 as a reporter.

Four years later in 1980, Anne became a primary anchor. While at WKRN, she served alongside popular news anchor Bob Mueller. Anne also made periodic appearances as a news anchor on the ABC hit TV series Nashville.

When Anne retired she left the Black community devastated because they knew how long they had to wait and how hard Black women have had to work to even get a seat at the anchor table on Channels 2, 4, 5 and 17. For a city this size it appears to be racist and anti-female. If you are black you can’t get a seat and if you are a woman you are not permitted to work as long as men – age discrimination.

Anne Holt was the first woman, the first African American, and the first news anchor to receive the Donald G. Hileman Distinguished Alumni Award from the Tennessee Association of Broadcasters.

A seven-time Emmy Award-winning journalist and recipient of the coveted George Foster Peabody Award for the investigative documentary “Under the Influence”, Anne is recognized by her peers throughout the region as an outstanding role model.

She has dedicated many years helping to feed hungry families in Middle Tennessee. She received the Honorary Leadership Committee for the Nashville Chamber of Commerce’s Partnership 2000 Project and several other non-profit fundraising awards. She was a Cover Story feature in Contempora Magazine published by The Tennessee Tribune Newspaper.

Currently, Anne Holt, Nashville’s most distinguished journalist, after 40 years of anchoring the news on News 2, has a new role – reporting about people and organizations that make a difference in Nashville.

Anne has served as a spokesperson for News 2’s “Food to Families” campaign. A sorting 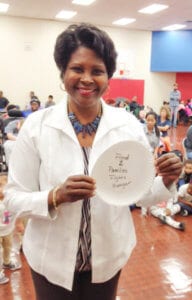 Mixed Use Development/MLS Soccer Stadium” Should be How the Proposal Currently...