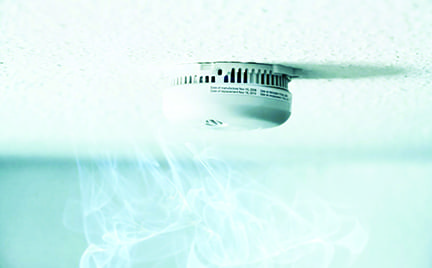 When should you throw away your mascara? Your pillowcase? Did you know that smoke alarms should be replaced after a certain amount of time? If not, you’re not alone. Many household items don’t have expiration dates, making it difficult for most of us to know when it’s time to toss them. Fret not! Here are nine items sitting around your house that you should probably get rid of right this minute.

1. Pillow case. Replace your pillow case every year. Otherwise, your face is coming into contact with all your hair and body oils, which causes bacteria. Even worse? Bacteria is a breeding ground for dust mites. Gross!

2. Mattress. While it can be a little pricey, mattresses should be replaced every five to 10 years, especially if you have trouble sleeping.

3. Smoke alarms. Smoke detectors become less sensitive after 10 years. Here’s a scary statistic: One fifth of U.S. homes have smoke alarms that don’t work, according to the National Fire Protection Association. Don’t be one of those households! Test your smoke detectors regularly and be sure to replace the batteries every year.

4. Vitamins. Most nutritional supplements lose their potency after two years, maybe three if they’re stored in a dry, cool place.

5. Mascara. Because the applicator used to apply mascara is constantly being exposed bacteria in the air, it’s best to toss out your mascara every 90 days.

6. Nail polish. Unopened nail polish can last forever, but let’s be realistic: Nail polish is meant to be worn! Once it’s been opened, the ingredients in nail polish begin to evaporate, causing the polish to thicken and separate over time. Toss it after two years.

7. Sponges. This one shouldn’t be that big of a surprise. I mean, come on! Anything that’s used to clean other things has got to be crawling with bacteria, right? Ideally, you should throw away your sponge out every time you use it, but to extend your sponge’s life, wet it and heat it in the microwave for one minute to kill germs.

8. Insect repellent. If you’ve had your insect repellent for any longer than two years, we hate to break it to you, but it’s absolutely useless at this point.

9. Rubbing alcohol. Once the seal has been broken, rubbing alcohol is only good for about two years. After that? The alcohol starts to evaporate, making the solution weak and no longer able to kill bacteria.

The Summer Heat and Controlling Your Diabetes

Nashville’s NAACP to Celebrate 100 Years at End of March