The 2018 elections are shaping up. The filing deadlines have passed, and most candidates are busy raising money, spending what they have already raised and/or borrowed to tell Tennesseans why they should vote for them and why they shouldn’t vote for those other folks.

This year, for the first time in decades, voters will not have an incumbent in either of the two statewide elections. Gov. Bill Haslam is in the last year of his two-term limit, and Sen. Bob Corker has opted not to run for re-election. 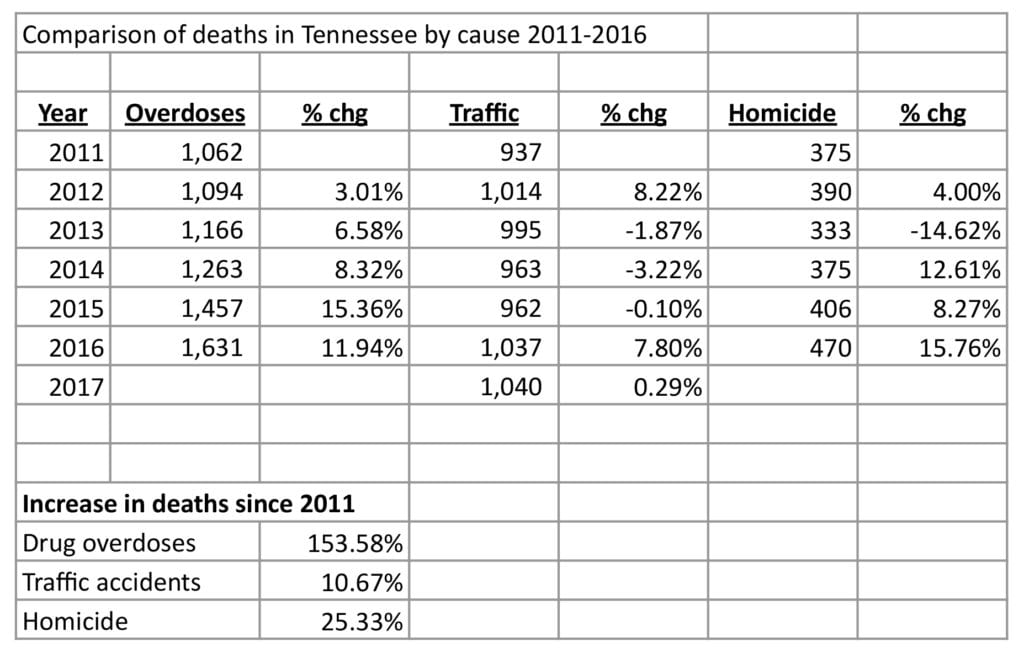 The 124-member newspapers of the Tennessee Press Association are working together to present a forum for the major candidates in the gubernatorial and senate races. Each month we are asking candidates to briefly outline their position on a significant challenge facing Tennessee.

Drive along Tennessee’s busy Interstate highways and you can’t miss the signs warning drivers to buckle up and drive safely – emphasized reminders of how many people lost their lives on the state’s roads.

In 2016, traffic accidents claimed the lives of 1,037 people, a nearly eight percent increase over the previous year.

And when you read or watch the news headlines each week you are certain to learn about another murder in our state. In 2016, 470 people were murdered, almost 16 percent more than in 2015.

But you won’t read digital signs or headlines about the fact that in 2016 the number of people who died from drug overdoses, primarily opioid overdoses, was greater than the combined deaths from traffic accidents and murder – 1,631 people died from a drug overdose in 2016.

The opioid crisis can be measured in many different ways, the excessive number of prescriptions – Tennessee ranks 49th among the states in the number of opioid prescriptions per person. Another grim statistic is that almost 37,000 different people were treated at a Tennessee hospital for opioid substance abuse or poisoning in 2016.

But it is the rapid increase in overdose deaths that illustrates the tragic nature of opioid abuse.

In his last budget, Haslam proposed a comprehensive approach to stemming the crisis, which he label TN Together: Ending the opioid crisis.

The governor proposed that initial opioid prescriptions be limited to a five-day supply, with daily dosage amounts also limited. He asked that sentences be reduced for inmates who complete an intensive substance use treatment program. And he proposed updated controlled substance schedules to improve tracking, monitoring and penalties for distribution of some controlled substances, particularly fentanyl.

Taking a cue from the highway safety sign program, the governor wants to increase education about substance abuse in Tennessee schools and implement a public awareness campaign about the potential dangers of opioid use.

In August, President Donald Trump declared that the opioid crisis was “a national emergency,” and hosted an “Opioid Summit” in March to formulate his administration’s response. The president’s plan is generally similar to the one proposed by Haslam.

What will new leaders do?

Opioid abuse, murder, and traffic accidents dominate the headlines of public safety and obscure the many moving parts that must be addressed to improve the health and wellbeing of Tennesseans, but these grim statistics are visible part of the iceberg that give us warning.

Frank Daniels is a writer living in Clarksville. A former editor, columnist and business executive, he is a member of the N.C. Journalism Hall of Fame. You reach him at fdanielsiii@mac.com

“Hidden Figures” Mathematician Katherine Johnson Defined Her Century, Left a Legacy for Ours

TSU Ranked Among the Safest College Campuses in US