NASHVILLE, TN — Local pastors and residents met in the sanctuary of the Jefferson St. Missionary Baptist Church last week. They each spoke briefly and then signed a letter to Tennessee Attorney General Herbert H. Slatery III asking him to withdraw from a class action lawsuit that strikes at the heart of the Affordable Care Act (ACA) and could kill it entirely.

“It is critical that we look at the fundamental structural problems we face in healthcare directly impacting our businesses, our economy, our families,” said Brittney Campagna. Her father suffered a stroke and his medical bills almost bankrupted Campagna, 27, a business owner.

“After bouncing between four insurance companies and finally being accepted to Medicare and Medicaid, he lost his ability to walk, sit, talk, feed himself, and most importantly, to hold my hand,” she said. Campagna’s father is now in hospice care.

After Republicans took control of the House in 2011 they immediately began attacking President Obama’s signature health law known as Obamacare. They have tried and failed to repeal it dozens of times.

Then, last year Congress passed a tax reform bill that ended the penalty for not having health insurance and that set the stage for a court battle that will effectively deny coverage to many of the estimated 2.7 million Tennesseans who have a pre-existing medical condition.

“Do we only care about souls or do we care about the bodies in which those souls reside?” asked Pastor Kelli X of The Village Church.

Twenty states, including Tennessee, are suing the federal government. They want two key features of the Affordable Care Act declared unconstitutional: the individual mandate to have insurance and the ACA’s protection for people with pre-existing conditions.

“One hundred thirty-three million non-elderly Americans have pre-existing conditions. This latest move from the Trump administration would allow them to be charged more or denied coverage all together based on prior medical problems,” said Kelli X.

The Supreme Court ruled in 2012 that the penalty for not buying health insurance was a tax and therefore the ACA was legal. But since Congress repealed that “tax”, the states argue the legal grounds for expanded healthcare under Obamacare no longer exist.

In the brief filed in a Texas federal district court, plaintiffs argue parts of the ACA are inseparable from the whole and they want the entire ACA voided in all states. At the very least, they seek an injunction to stop covering pre-existing conditions in the 20 states who have been “irreparably harmed” by the ACA.

That harm is more about money than morals. The brief states that Texas spent $473 million on the ACA from 2011-2017, received $241 million from the federal government, leaving “Texas holding the bag to the tune of roughly $231 million”.

The states’ brief goes on for dozens of pages but comes down to a state’s right to throw the baby out with the bath water when it comes to healthcare for those who need it most.

“They are very smart lawyers and they can make white look at least like grey if not black. But if you step back you have to say ‘wait a minute what are they saying?’ It’s wordplay. It’s clever but it’s wrong,” said Gordon Bonnyman, co-founder of the Tennessee Justice Center.

A June poll by Kaiser Family Foundation found 65 percent of voters think covering preexisting conditions is the “single most important factor” or “very important” to their vote in the midterms elections. That issue is first and foremost, more important to voters than bringing down drug costs, or repealing the ACA, or stabilizing the ACA marketplaces, or passing a national Medicare-for-All plan. (see graph) 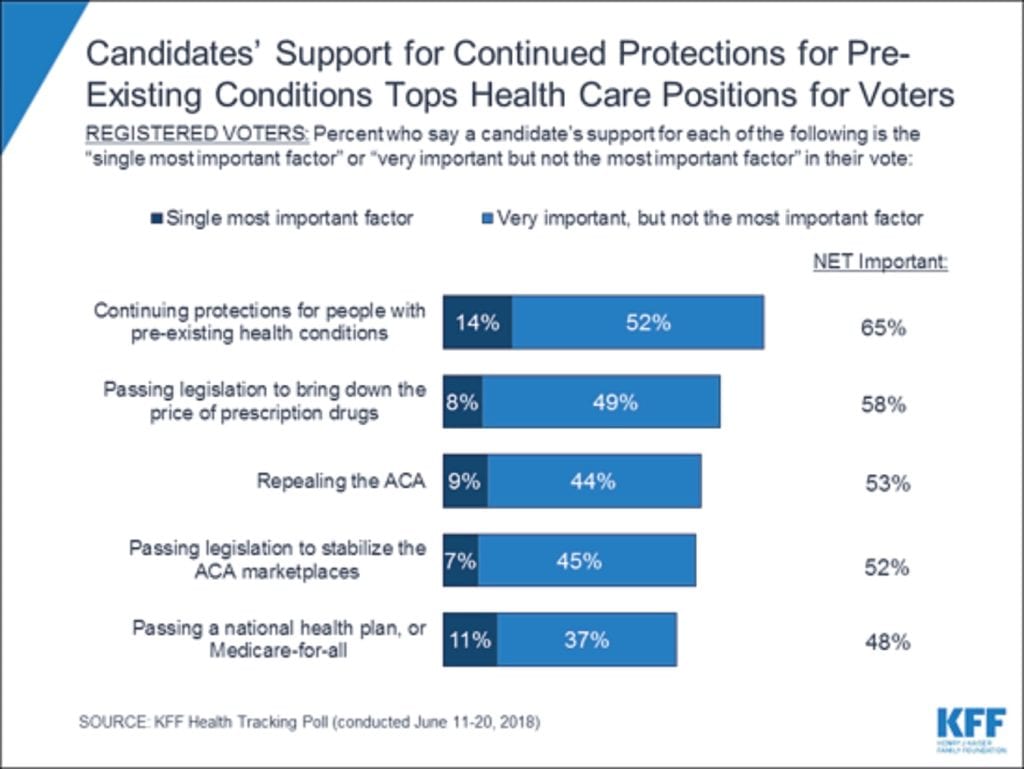 Pastor Aaron Marble, of Jefferson St. Missionary Baptist Church said the lawsuit has created a cloud of uncertainty for insurers all across the country. He said health premiums are likely to spike.

“If the lawsuit prevails coverage of for millions of Americans, protection for preexisting conditions, and any semblance of stability in our healthcare system would disappear overnight,” Marble said.

Dr. James Blumstein is a Vanderbilt professor of Constitutional Law and Health Law & Policy. He thinks the suing states are likely to get rid of the preexisting conditions protection under the ACA. The Department of Justice has conceded that part of the legal argument although other states are filing briefs opposing it.

Blumstein puts the chances of invalidating the entire ACA at one in five. That’s because courts usually just take out the parts of a law they find unconstitutional leaving the rest. He expects the case to go to the Supreme Court and that could take years.

In the meantime, Blumstein worries the lawsuit will create havoc in health insurance markets. He said that if younger healthier people don’t sign up, those who do are riskier and cost more to cover.

“So you have a more expensive pool, which in turn further reduces the incentive of the low risk, low cost persons to sign up, which further raises pricing,” he said.  He fears this might result in “a death spiral” of the nation’s healthcare system.

The Center on Budget and Policy Priorities contends the latest Republican proposal to replace the ACA will destabilize the markets. Released last month, the plan would eliminate ACA’s expansion of Medicaid and end subsidies, replacing them with black grants, and also end protections for people with pre-existing conditions. Like its predecessors, the latest GOP plan is proving about as popular as a glass of sour milk.

Kathleen Jones is the mother of Tiffany, now 20 months old, who was a preemie and born with a hole in her heart. “Every day in our household is a blessing. Every breath she breathes is a miracle,” said Jones.

Tiffany didn’t leave the house until she was 8 months old, just trips back and forth to the hospital for catheter treatments, blood transfusions, and open-heart surgery. She will have two more surgeries soon. In her first ten months, the cost of Tiffany’s medical care was more than $300,000.

“There is no way we could do this without insurance,” Jones said. And if the lawsuit prevails, most babies born like Tiffany would die. Her Mom said she can’t understand how Tiffany’s situation and her life-saving treatment could be found unconstitutional. When she thinks about the U.S. Constitution and Declaration of Independence she thinks about life, liberty, and the pursuit of happiness.

“I’m pretty sure pre-existing conditions fall into that. I will sign this letter for that reason alone.“ Then Jones picked up a pen and signed the letter to the Attorney General asking him to withdraw from the lawsuit.

The Tribune asked Slatery via email why he joined the lawsuit. His office responded that the AG does not comment about on-going litigation.