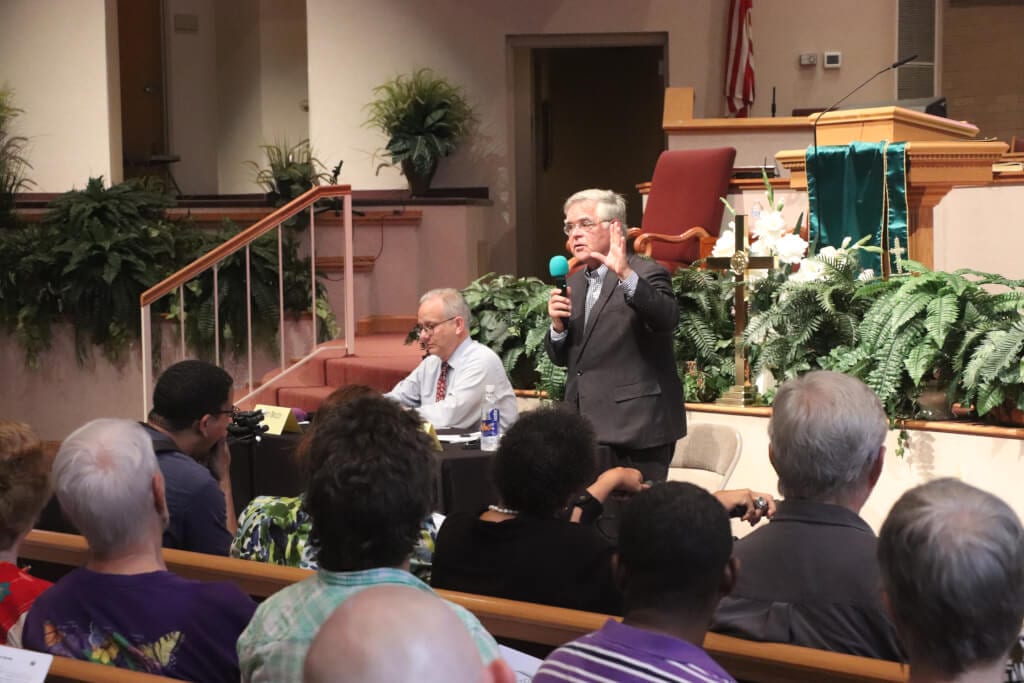 “The city engages in trickle down. We basically give incentives to building and hope that through the landlord it gets to people. That does not really work. It has not worked nationally and has not worked here locally. What does work is workforce skills,” said At-Large Councilman John Cooper.

NASHVILLE, TN – David Briley and John Cooper faced off inside the 15thAvenue Baptist Church Sunday, August 18. They answered questions from members of Nashville Organized for Action and Hope (NOAH).

“We made progress on affordable housing. If you want to make progress for everybody in Nashville I’m the one who will fight for you,” Briley said.

“A couple weeks ago there was an election and 75% basically said let’s have some change. We all have the same question: is growth controlling us or are we controlling growth?” Cooper asked.

The two mayoral candidates were seated at a table in the front of the church and from a nearby podium NOAH members asked written questions. Amanda Lucas did not ask the candidates if they would fire Chief Steve Anderson. “If it becomes necessary” would community groups participate in hiring a new police chief?

“We need to do a national search and we need to focus on getting voices outside the department,” said Briley. “Whoever we bring in has to be fundamentally and primarily focused on diversifying the force because right now the force does not look like the city we live in,” he said.

Cooper said a new chief would have to commit to community policing. “We need to re-vision what we want the police to be in the 21st century and the new chief has to be willing to establish that policy,” Cooper said.

Paulette Coleman asked if the candidates would create a separate Metro housing department outside of the Mayor’s office, fund it like other city departments, and staff it with affordable housing experts. Both Cooper and Briley said “Yes”.

Coleman asked each candidate how they would negotiate with big companies to increase the stock of affordable housing as part of any incentive deal to move operations to Nashville.

Cooper said people are displaced by growth and the lack of affordable housing is a terrible price to pay for it. “To reverse that you’ve got to get money and it has to be the focus of everything you’re doing,” he said.

“Everybody needs to understand that going forward we will probably need fewer economic incentives. I haven’t proposed a single tax increment financing deal since I’ve been mayor,” Briley said.

Briley noted he got a community benefits agreement with the Fairgrounds soccer deal and he slammed Cooper for voting against it. “He says he supports it but he voted against it. That’s what we’re going to hear again and again,” Briley said.

“Community benefit agreements are great. But it’s not good for government to go to outside parties as a backstop to negotiate for justice,” Cooper said. Stand Up Nashville, a community group, negotiated the CBA with MLS team owner John Ingram. The deal has been tied up in court for months and may never happen.

“Would you create a Metro revolving fund within the Barnes fund to issue small bonds as financial vehicles to encourage private individuals and private foundations to invest in affordable housing?”

“That’s a good idea and that’s what we’ve been talking about with the $250 million in the Under One Roof initiative,” said Briley.

“A revolving fund that shortens the time to market for worthy affordable housing projects is, of course, a very good idea. But the trick is to replenish itself and it has to be started in a way that money comes back,” Cooper said. He would put that fund in the new Department of Housing.

Suzanne Johnson wanted to know why both candidates opposed raising property taxes after they were set so low in 2017. “This created windfall profits for developers and commercial properties who pay a higher rate than residential homeowners,” she said. “Both of you have opposed the effort to correct the rate. Why?”

“Councilman Cooper’s 2017 budget was the worst budget that the city has had in decades. It did so many things: it set the tax rate too low, it spent our reserves down to a bare minimum; it made promises that couldn’t be kept; it didn’t fund General Hospital fully,” Briley said, adding, “He was the chair of the budget committee.”

“If we’re going to try to create economic justice and get back the money from growth, and boy we have to try, we should not be bamboozled into thinking we can’t do it,” Cooper said.

Briley referred to his 22 years of public service “fighting for the things that NOAH fights for because that’s what I care about and my record demonstrates that.” Briley wandered off topic a few times to take swipes at Cooper and called him a liar three times during the 1.5 hour event.

Cooper did not rise to the bait or respond in kind or even refer to his own record. He has opposed many City Hall initiatives, including a plan to develop Fort Negley, the sweetheart deal for the old convention center, and the giveaway of 10 acres in the middle of the Fairgrounds worth millions. But he did not draw Briley into a fight over those issues.

He just kept talking about putting people and neighborhoods first and reversing the trickle-down approach to growth that is making Nashville unaffordable to so many residents.

Regarding city business, Cooper said privatizing city services and jobs can be an inefficient use of public money that winds up going to private parties who have figured out how to game the system. He noted the NAACP’s finding that the rate of minority businesses getting city contracts has remained less than 3% for decades.

Briley, on the other hand, claimed things are getting better because of new subcontracting rules, more minority business staff, and the creation of a Minority Business Advisory Council to help level the playing field.

In short, Briley said “Trust me, look at what I’ve done, let me keep on doing it.”  Cooper said “Not good enough, we can do better.” We’ll find out September 12, the date of the run-off election.