Bowing to mounting pressure, Mayor John Copper agreed last week to a soccer stadium at the Fairgrounds. Cooper and SC Nashville owner John Ingram announced new terms in a deal that is still tied up in court.

the costs for the stadium construction to team owners and creates a public plaza between it and the Speedway at the Fairgrounds.

“We are very happy to be moving forward with the stadium construction,” said Ingram. “I’m so glad we’ve reached a better deal for Nashville,” said Cooper.

Under the new terms, the team will pay $19 million for infrastructure, $35 million towards lease payments, and keep its long-term lease on 10 acres for private development. Cooper said Metro would proceed with the demolition of the old Expo buildings immediately so construction could begin.

“The planning department will work with the developers on their plans going forward to create the best possible site, including a public plaza,” said Cooper spokesperson Chris Song.

The agreement would give Ingram two big concessions: a Fairgrounds stadium and 10 acres right in the middle of the 117-acre property. Metro will still borrow $225 million to build the stadium but the team is responsible for paying the money back. 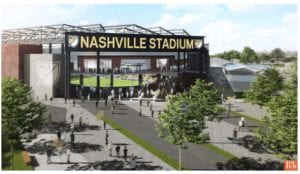 lease that is somewhat like a poison pill. As it stands now, if the team fails to play a game for two years anytime during the 30-year lease, the 10-acre private development reverts to Metro. That condition has prevented the Turner Group from getting financing to build on the 10 acres.

Plaintiffs kept hoping Cooper would take their side in a lawsuit to stop the stadium deal. For the moment it remains stalled. Metro can’t borrow the money to build the stadium until the Save Our Fairgrounds lawsuit is settled.

In their joint press release last week, Cooper and Ingram referred to the deal’s new terms as an “amendment”. Neither Metro nor the team has signed the two lease agreements and any changes to the proposed contracts will have to be approved by Metro Council.

Save Our Fairgrounds attorney, Jim Roberts, said he would file a motion for a temporary restraining order this week. He will ask Chancellor Ellen Hobbes Lyle to prohibit the demolition of the old Expo buildings and any private development on the Fairgrounds property until after a referendum vote is held. Parties will meet Friday, February 21 in Lyle’s court to set a trial date and consider Ingram’s motion to intervene in the lawsuit.

Roberts told the Tribune that a 2014 council ordinance prohibits any private development on Fairgrounds property without a referendum.

“WHEREAS, the August 4, 2011 Charter amendment approved by the voters essentially prohibits the cessation of any of the existing uses at the Tennessee State Fairgrounds or redevelopment of the property without a subsequent amendment to the Metropolitan Charter,” states the ordinance. It was sponsored by former District 17 Councilwoman Sandra Moore and signed into law by then mayor Karl Dean on March 4, 2014.

The City Charter is amended by referendum and there are two ways to go about it: 2/3 of Metro Council must approve a change and then a referendum vote is held, and second, by petition of 10% of the voters in the previous general election, which is then followed by a referendum vote. The council approved the stadium by 2/3 majority but a referendum vote was not held.

A chorus of stadium boosters has been beating their drums outside Cooper’s door. The Chamber of Commerce, the Fair Board, MLS and Nashville SC officials, Stand Up Nashville, and a long list of prominent Nashville businessmen pressured Cooper. So did Governor Lee and state officials. Even At Large Councilman Bob Mendez, usually a Cooper ally, told him to quit stalling. Ingram threatened to sue Metro for not moving forward on the deal.

The Chamber has supported a stadium deal since the beginning and collected more than 100 signatures for a letter sent to Cooper telling him to start demolition of the old Expo buildings. Nashville SC called for a rally of soccer supporters last week. Only about 200 people showed up, according to the Tennessean.

Boosters claim MLS has widespread support for a Fairgrounds stadium. A referendum would have determined how much, and importantly, provided a legal foundation for the deal.

Two years ago, a WKRN poll found Nashvillians were against the Fairgrounds stadium 62% to 38%. Voters approved a charter amendment by similar margins in 2011 to keep existing uses at the Fairgrounds and to stop then mayor Karl Dean from developing it. As we reported in September 2018, council nixed a resolution to hold a referendum on the stadium when it approved two leases to Ingram.

Team spokesman Zach Hunt said more than 40,000 tickets have been sold for the 2020 season opener against Atlanta United at the Titan’s stadium February 29. All the high drama of the past two weeks is not the same as consent of the majority but it got Cooper to change his mind. And that was the point of it all.

“It’s absolutely shameful what the people want and deserve to keep at the Fairgrounds counts for nothing while the rich and powerful in this town determine what we commoners will have to live with,” said Shane Smiley, a Fairgrounds preservationist.

The Tennessean editorial board inveighed against Cooper for holding out against the stadium claiming he “puts in jeopardy Nashville’s integrity and reputation”.

The paper ran three OpEds, a column by David Plazas, fawning reportage by Gentry Estes—all of it slanted in favor of the stadium deal. TV coverage has been equally one-sided with the notable exception of Nancy Amons at WSMV.

Orange Doesn’t Have to Be the New Black