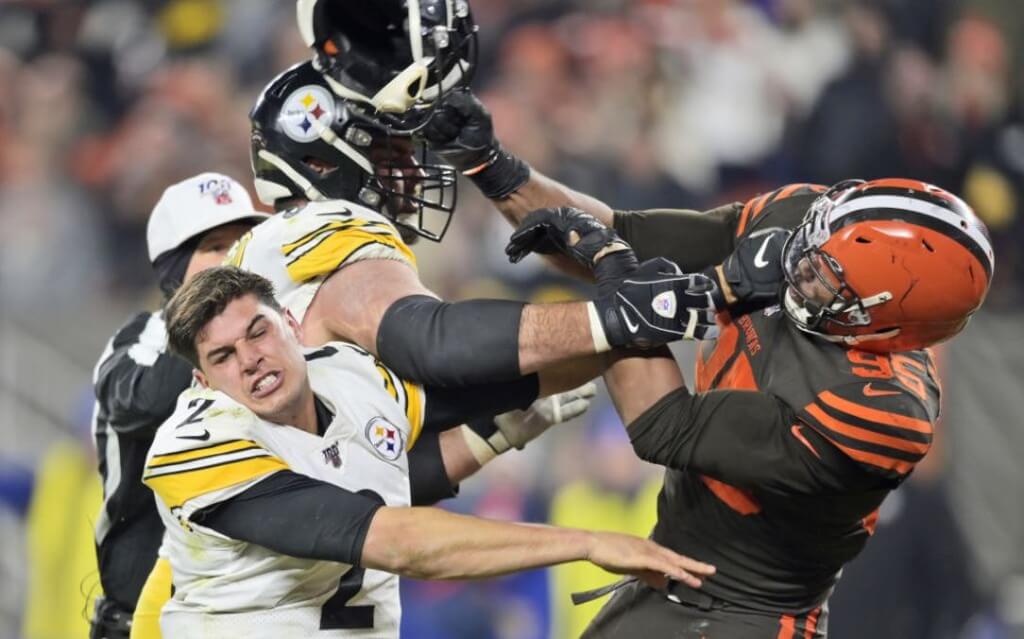 given the league bad publicity with the spectacle of one player hitting another with a helmet, provoked by the QB trying to take off the lineman’s helmet. Plus there was the specter of a possible full fledged melee breaking out, with players from both sides openly clashing on the field.

After Garrett  and Rudolph issued public statements of regret and apology, it seemed things were quieting down. But right after Garrett’s appeal of his indefinite suspension was denied, things quickly took an ugly turn when he accused Rudolph of uttering a racial slur at him. He attributed that to being a large part of what provoked things.

The league responded they could not find any proof to support that claim. Garrett continues to insist he heard it. Rudolph maintains he never said it. There is also no on field audio to support Garrett‘s contention. This leaves things in a very awkward position.

Those who don’t believe Garrett feel he concocted this to get sympathy and reduce his sentence. Those who believe Garrett  feel Rudolph has gotten off lightly, being fined $50,000 and getting no suspension. Garrett was fined $45,623 and is not being paid while on suspension. Maurkice Pouncey was suspended two games and fined $35,096. Larry Ogunjobi was suspended for one game but not fined.

Still all of that pales next to the cloud left hanging over things due to the racial allegation. If Rudolph did indeed utter that slur he is guilty of not just unprofessional but disgusting and disreputable conduct. If Garrett  made up the story, he has denigrated himself and trivialized an important issue: unacceptable and racist public behavior.

It’s not exactly the kind of publicity or attention the NFL wants or needs, especially with bad feelings towards the league already widespread in light of the recent Kaepernick fiasco.

It seems the NFL remains mired in controversy these days. No matter how high the TV ratings, they can’t be happy with either the original incident or the additional furor around it.