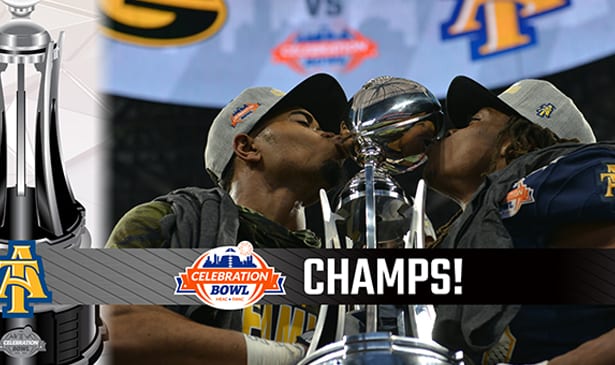 The Celebration Bowl isn’t among the best known or longest running college postseason events. But it is the most significant for most HBCUs. It is the official championship game for HBCU football teams, at least those competing in such conferences as the MEAC and SWAC. It is also one of the few times HBCU schools get on national, as opposed to regional, television.

Last Saturday North Carolina A&T won its second Celebration Bowl in three years and completed a 12-0 campaign. It was A&T’s fourth national title. matching the ones earned in 1990, 1995, and 2015. They also defeated one of the titans of HBCU sports and football, besting Grambling 21-14 in an exciting game covered by ABC.

For many unfamiliar with either team, it was their introduction to QB Lamar Raynard. He is an exciting, double threat player who completed 23 of 43 passes for 225 yards and a touchdown while also gaining 17 yards on eight carries. In addition he scored the game winning touchdown with 39 seconds left before a capacity crowd in Atlanta.

Unfortunately his exploits won’t get a lot of coverage in mainstream publications. While Grambling and North Carolina A&T both had double digit victories this year, the Celebration Bowl didn’t even get as much coverage as the Las Vegas Bowl that matched 7-5 Oregon against 10-3 Boise State, or the New Mexico Bowl pitting 7-5 Marshall against 7-5 Colorado State.

It would be utterly ridiculous to claim HBCU football is on par athletically with Power Five Conference or even the next Group of Five conference squads for an obvious reason. Those schools get the top and next to the top Black athletes available, plus the best white players. HBCU schools don’t have the resources, facilities or roster depth to compete. That is why when an HBCU team faces a Power Five school in head-to-head competition, especially on the road, the results are usually disastrous.

But that doesn’t mean HBCUs don’t play entertaining football. Nor should their games not be covered or supported. Conferences like the OVC, Sunbelt or Conference USA aren’t as good as Power Five schools either, but you can sure see extensive coverage and stories about Western Kentucky or MTSU. Even the Ivy and Patriot leagues that don’t even give athletic scholarships get better regular and postseason coverage.

It is time for that inequity to end. HBCU schools should be on national television more than once or twice a year, and the Celebration Bowl merits fair coverage alongside any other Bowl not connected to the championship playoff. It is simply a matter of fair play and equal coverage opportunity.