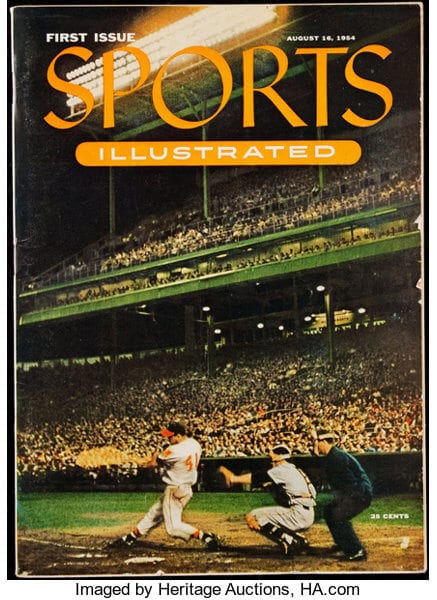 It was 65 years ago that a new publication devoted to a different type of sports journalism debuted. Sports Illustrated was created to offer readers something beyond just basic wins

and losses recaps. It sought to show the human side of sports, to discuss and examine issues and personalities,  and offer a perspective that was usually more restricted to discussions of politics or other aspects of society.

Over the years some of the finest writers in any genre were featured in SI. It blended the visual excellence of a publication like Life with the literary quality of The New Yorker.  Over the years they also explored tough social sports topics like racism,  gender equity, the treatment of athletes at bigtime college programs, and corruption at the Olympics and in the world of international soccer.

Sometimes they irritated certain sectors of their audience. Some parents objected each year to the annual swimsuit issue. Others bristled at the inclusion of what they considered non-sports stories about travel, animal rights and the environment or coverage of sports that weren’t the regular menu of baseball, football and basketball. But through it all SI persevered.

But now it seems the realities of 21st century print magazine economics are affecting them. Last Thursday SI was transferred to a new company. A Seattle-based digital firm Maven now controls the publication. They announced in an ominous sounding memo that they would “refocus” SI for a January relaunching.  They claimed this would “enhance real time news cycle coverage, strengthen mobile platform delivery and increase the development of complementary video content.”

But the truly scary part of this news was that they would publish the work of a network of bloggers who would cover up to 200 college and professional teams. Left unsaid, but quite obvious was that there would be a considerable number of layoffs. Also that there will be a noticeable dip in content quality.

A group of Sports Illustrated staffers issued a statement that was included in a Friday New York Times story about the transfer. It said Maven “wants to replace top journalists in the industry with a network of Maven freelancers and bloggers, while reducing or eliminating departments that have ensured that the stories we publish and produce meet the highest standards.”

Of course the Maven crew insist this is not their intention, though they wouldn’t release any information regarding how many  people were laid off, or their identities.  But it seems clear that the SI that has over the years done valuable and groundbreaking stories on a host of subjects is about to dramatically  change. Only  time will tell whether that’s for the better, but the early indicators aren’t very promising.