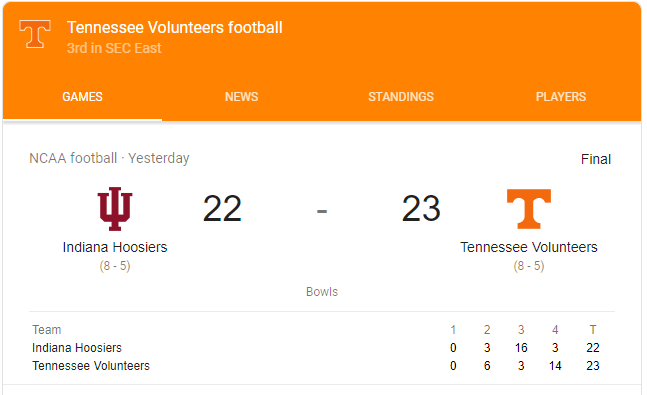 By Ron Wynn
The Tennessee Volunteers came back from a 13-point fourth quarter deficit with a pair of touchdowns to grab a stunning 23-22 win over Indiana Thursday in the Gator Bowl. Indiana was ahead 22-9, and the Volunteer fans among the crowd of nearly 62,000 in Jacksonville looked glum. But then the Vols drove 82 yards to pull within six points, and made the play of the year on the following kickoff. Paxton Brooks perfectly executed an onside kick, with the game’s MVP Eric Gray recovering it. It took only three plays before Gray went 16 yards for the go-ahead touchdown with almost four minutes (3:51) remaining.
But it wasn’t over at that point. Indiana’s Logan Justus missed a 52-yard field goal, completing a miserable night for him as he also missed a critical extra point. Indiana also had one last chance, but a forth down pass by their QB Peyton Ramsey was incomplete. The second half flurry was in marked contrast to a defensive controlled first half that ended with Tennessee ahead 6-3. The the Hoosiers started the third quarter with a 69 yard, 12-play drive to take the lead. They followed that with an interception return for a touchdown that made it 16-6. But the Volunteers were able to rally, even as starting QB Jarrett Guarantano was having problems with accuracy and was even replaced at one point in the third quarter. Brian Maurer came in for one drive, but had consecutive passes that should have been intercepted, but were dropped. Vols head coach Jeremy Pruitt returned Guarantano to the game, and he eventually helped Tennessee secure its eighth win of the season. They ended the year on a six game winning streak after beginning it with bad home losses to Georgia State and BYU. Guarantano completed 18 of 31 passes for 221 yards, but it was their running game, most notably Gray’s fourth quarter contributions, that enabled Tennessee to get one of its most improbable victories.
Facebook Comments