The Tennessee State Tigers improved in several areas this season, and a big reason for that was the play of Carlos Marshall. Last week that was recognized as Marshall, a redshirt sophomore, was named to the Ohio Valley Conference’s All-OVC and All-Newcomer teams, the first Tiger to accomplish that double since Kenny Moore in 2010-11. He was a second-team All-OVC selection. 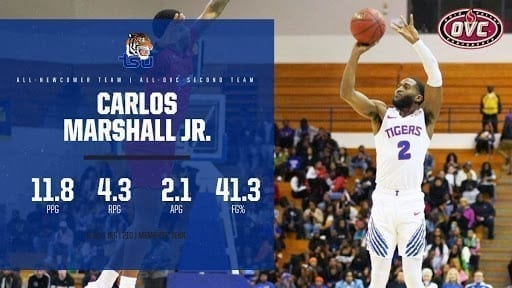 floor in his first season as a starter. He also had 63 assists and 20 steals. His averages improved to 13 ppg in league play, with Marshall making 44 percent of his shots from the floor and 35.4 percent from three-point territory.

Marshall led the Tigers to a first-round OVC tournament win over Morehead State, and TSU had a slim two point halftime lead last Thursday against Eastern Kentucky. But their offense fizzled in the second half, as they scored only 20 points. So despite holding EKU to under 35 percent shooting from the floor and three-point territory and outrebounding them 44-33, the Tigers’ season ended in a 58-48 quarterfinal round Tournament defeat. The Tigers also had 26 turnovers, which EKU converted into 20 points.

Still, there were other good things in this season, the first winning one for Brian “Penny” Collins. TSU ended with an 18-15 mark, had a 9-9 OVC mark, and made the postseason Tournament. Now they must build off that in the offseason recruiting wars if they hope to make the next step into title contention during the 2020-21 season.