NASHVILLE, TN – Blacks, Latinos, and Asians overwhelmingly voted for the Biden-Harris ticket and sent Donald Trump an eviction notice last week. He’s got two months to vacate the White House. It was a fitting end to the regime of an unpleasant and jingoistic loudmouth who divided the electorate and diminished U. S. standing in the world more than any previous President.

By the slimmest of margins, voters in Pennsylvania, Nevada, Arizona, Georgia, Wisconsin, and Michigan picked Biden over Trump. Trump refused to admit defeat in those battleground states and vowed to take court action “to ensure election laws are fully upheld and the rightful winner is seated.”

It won’t make any difference. Trump has lost. But living in denial with a set of alternative facts, indeed, in an alternative reality, is Trump’s normal state of being. His political genius lies in how well he has convinced nearly half the country they are living in it with him.

Despite what he says, it’s every man for himself in Trump’s America. He loves playing to an adoring crowd because he is the center of attention. He loves insulting his enemies on Twitter because he remains the center of attention. That’s what Trump really cares about—being in the limelight. He really doesn’t care about anything else. He heard Biden had won Saturday while on his way to play golf at his course in Sterling, Virginia.

Trump convinced his supporters that their problems are the country’s problems and that socialists, Black Lives Matter activists, and criminal aliens are to blame. A reality check is long overdue.

Four years of Trump have eroded traditional American values of decency and fair play and the coronavirus has killed more than one quarter million people in nine months. That’s four times the number of American soldiers killed in Vietnam from 1954 to 1975.

“Thank you for saving our democracy,“ said Frank Sharry, executive director of America’s Voice, an immigration reform organization. He was talking with reporters from the ethnic press on a conference call last Friday.

“If not for the minority vote we would not be celebrating the victory we are celebrating,” Sharry said.

“They chose on the side of America being a welcoming country,” he said.

“The most defining feature of American politics is the Black American vote,” said  Theodore R. Johnson, a senior fellow at Brennan Center for Justice.

“There is no other voting block in the country of this size with this amount of electoral power that behaves in the way that the Black American electorate does for this long,” he said.

For at least sixty years, 90% of Black Americans have voted for the democratic candidate for President and also for democrats in Congressional elections. It’s been like that ever since the Civil War when Black voters lumped themselves on one side or the other of our two-party system.

Johnson said this strategy was a way to exercise collective power through racial solidarity and further civil rights. Voting as a block is also a way to protect against overt racism from one party.

He said the reason African Americans supported Joe Biden in the primary season and not more progressive candidates like Cory Booker or Bernie Sanders was because they were practical. They thought Biden had the best shot to beat Donald Trump and they thought he would draw white votes away from Trump in battleground states.

Johnson said picking Kamala Harris as his running mate contributed to the increase in enthusiasm and an increase in Black turnout for this election. He also said the hardships 2020 has brought to Blacks underscored its importance to them.

“This is the highest turnout in 120 years and this thing is razor close,” Johnson said.

The lopsided support for the Democratic ticket in the Black community was high and grew higher because the coronavirus has hurt Blacks more than it has others. Johnson said when the economy started to fail, Blacks were laid off at disproportionate rates and their unemployment rates were disproportionately high.

On Memorial Day George Floyd was killed. And people heard about how Brianna Taylor was killed in March and Ahmaud Arbery in February.

“A summer of racial justice protests plus high unemployment, low economic security alongside a coronavirus pandemic, contributed to lots of voter enthusiasm to remove Donald Trump from office. And that explains why we’re seeing Atlanta change Georgia, Philadelphia change Pennsylvania, Milwaukee change Wisconsin, and Detroit change Michigan. And that is the power and the enthusiasm of the Black vote,” said Johnson.

Latino Presidential votes broke down about 70% for Joe Biden and 30% for Trump. (see graph). Two exceptions to this are in Florida where 38% of Latinos voted for Trump and in Texas where 29% voted for Trump. 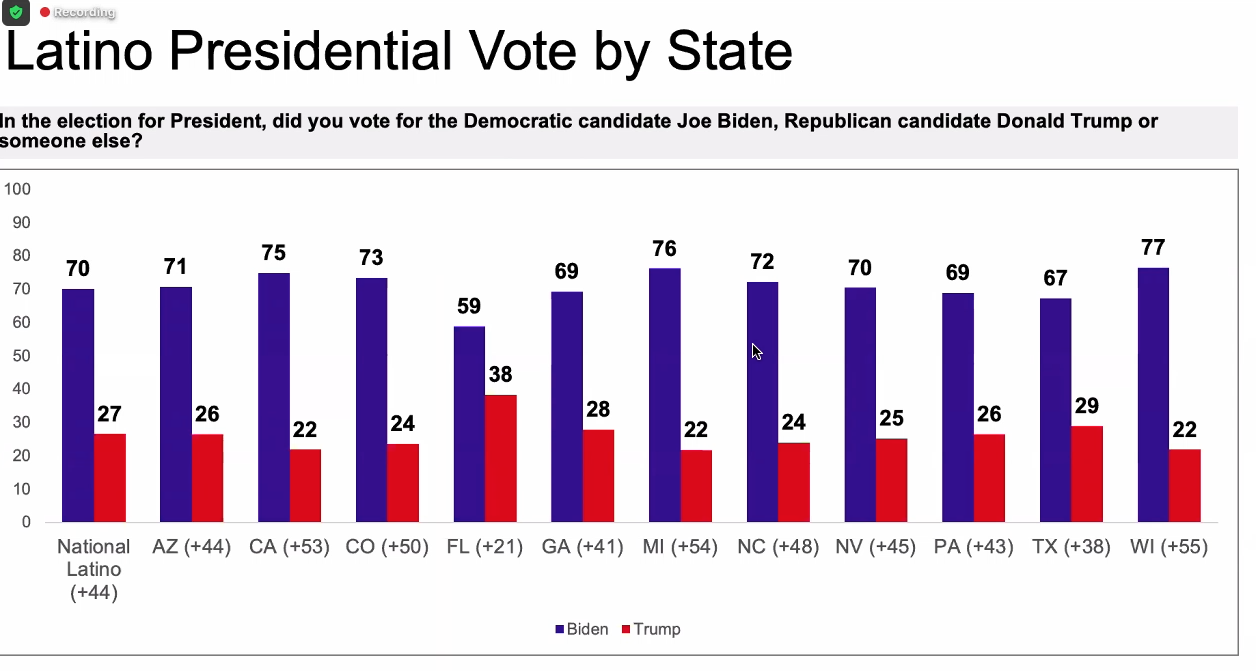 “If you are a state legislator or U.S. Senator or if you are a congressperson who did not expect to do the work and expected to ride coattails in this election and you lost, the lesson here is Latinos cannot be ignored especially on election day,” said Dr. Stephen Nuño-Perez, an election analyst and associate professor at Northern Arizona University.

He said it takes engaging Latinos on the ground in order to win. The DNC did not endorse old-fashioned block canvassing because of the health risks. Rep. Ilhan Omar in Minnesota got around the handicap by finding someone who lived in an apartment building to campaign for her. She won handily although other Democrats did not.

Nuño-Perez said Latinos are a very diversified group. Anti-communist Cubans in Miami voted for Trump as did many ex-pat Venezuelans. Many Puerto Ricans living in Central Florida were swayed by Trump’s recent release of hurricane relief funds.

He struggled to analyze what happened in Florida because some polls predicted it could flip blue.

“These communities were just being ravaged by COVID-19 and responding to that on Election Day,” he said.

MEMPHIS, Tenn. – Tennessee Senator Marsha Blackburn and Senator-elect Bill Hagerty have announced they will vote to oppose the Electoral College results of the 2020 presidential election. Blackburn and Hagerty will be joined by nine […]

December 31, 2020 Article Submitted Politics Comments Off on Pence Seeks Rejection of Lawsuit that Aimed to Expand His Power to Overturn the Election

Washington D.C.– Vice President Pence asked a judge late Thursday to reject a lawsuit that aims to expand his power to use a congressional ceremony to overturn the presidential election, arguing that he is not […]