NASHVILLE, TN – Vaccine hesitancy has been in the headlines for months. News reports generally frame the issue as obstinate people who are misinformed.

A recent study by Tufts University researchers found Whites are more likely to have been vaccinated than Blacks despite similar levels of vaccine hesitancy. External factors, not attitudes, explain the difference.

Barriers to access or technology or living alone can account for much of the differences in vaccination rates, not hesitancy by any particular ethnic group.

Older people are more likely to be vaccinated and less likely to be hesitant. Eighty-two percent of people 75 and older report being vaccinated. Younger adults (18-35) are the most hesitant.

“Based on Kaiser Family Foundation COVID-19 monitoring data, older Black adults are getting vaccinated at the same rate as older White adults, so all of the activities taking place are clearly making a difference,“ said Cindy Cox-Roman,CEO of HelpAge USA.

She partnered with the National Caucus and Center on Black Aging. They conducted in-depth interviews between January and April with 32 Black seniors. The average age was 70 and they lived in Washington DC, Chicago, Atlanta, California, and Mississippi.

A lot of online research has been done around vaccine hesitancy but Cox-Roman said that the views of older low-income Black adults are not typically represented in online panels.

“We really want to make sure their voices did not go unheard so public health officials and community leaders can incorporate those voices into their strategies to meet their needs,” she said.

Just like everybody else, Black seniors have divergent views about the vaccines ranging from “Rejectors” to “Believers”. During the course of the study, researchers found the “Wait and See” group moved toward acceptance for pragmatic reasons. 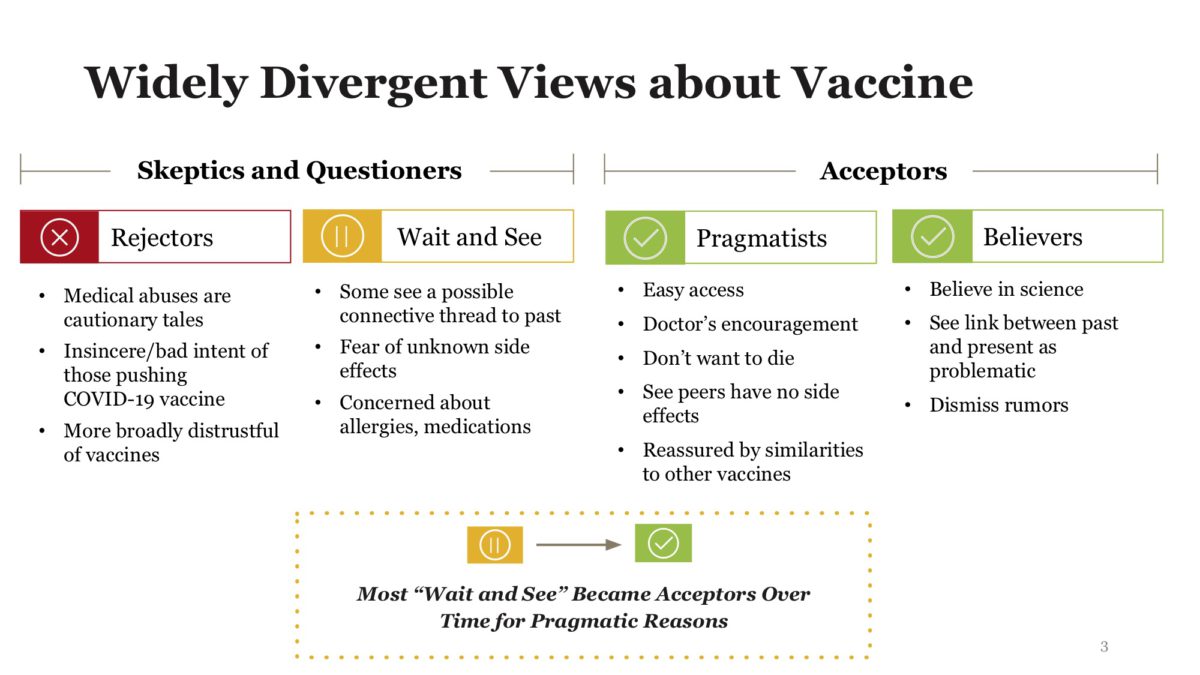 Since the pandemic began, older Black adults have struggled to resolve conflicting sources of information.

“One women relied on information about health from her local senior center but when it closed during the pandemic, she lost her trusted source of information,” Cox-Roman said.

“But when the library is closed where do people go for information? Everybody doesn’t have access to the web and cable is expensive. We are the lost generation in the information age,” said a 67-year old Georgia man.

Some vaccine hesitancy among Black seniors comes from an acute awareness of an inequitable healthcare system. A 64-year old California woman saw a video made by an African American woman who described how badly she was treated in the hospital. She died there. The California woman was convinced by the video to get the shot because she feared catching COVID-19 and being hospitalized.

“History has proven to me not to trust the medical people and not to trust anyone who is in power,” said a 79-year old man from California.

Lack of trust in health authorities is not an irrational fear. According to one geriatric specialist, people with disabilities and seniors are most at risk from COVID-19 and they have the hardest time getting vaccinated. And in the early days of the pandemic they became expendable.

“About 4% of America’s old people live in facilities—nursing homes or assisted living facilities­–­­­–but across the country they account for 34% of deaths,” said Dr. Louise Aronson, Geriatrician, and Professor of Medicine at UCSF.

Aronson said that in many states old people who lived in the community got sick with COVID-19.

“They were so sick they couldn’t go home, so what did they do? They sent them to nursing homes with their COVID. So they took people with COVID and put them in the facilities with the people at the highest risk. At the same time they didn’t provide those facilities with the ability to test or with the equipment to protect the people who worked and lived there,” Aronson said.

A lot of residents got sick and the people who worked in those facilities took the disease back to their communities, usually low-income communities of color.

For seniors, people of color, and people with disabilities the pandemic was bad enough but these groups also suffered from a health system that not only failed to respond to their needs but also made things worse for them.

“We don’t really see older people but if also you don’t come out of your house, we really don’t see you. And if you’re an older person of color in your home you are at least triply invisible.

Black seniors are harder to reach by the strategies that counties, the states and the federal government are using. Most of those strategies rely on the Internet. We know the communities least like to have access to the Internet are the oldest people, the people in rural areas, and recent immigrants with limited or no English, “ Aronson said.

Seniors kept hearing through the media that they were the most at risk. But then they heard you were supposed to go to mass vaccination sites where there were lots of other people. And there usually weren’t chairs for people to sit in while they waited.

“I see these people standing in long lines on television and they’re all standing outside. I am not physically able to do that,” said a 71-year-old woman from DC.

“The area where we live in is considered a minority area. We are frustrated because they keep saying we are reluctant, but they are just not available,” said a 59-year old Georgia woman.

Mass vaccination sites are passé’. Smaller sites like community clinics are more accessible and better suited to getting vaccines to the hardest to reach. For example, a San Francisco non-profit, Self Help for the Elderly, brought vaccines to Chinatown where many seniors live in single room occupancy hotels (SROs).