TORRANCE, CA — The votes are in and the top eight bands have been selected to perform at an epic 2020 Honda Battle of the Bands (HBOB), the nation’s premier showcase for HBCU (Historically Black Colleges and Universities) marching bands and dance teams. HBCU marching band fans cast their votes to help choose the “final eight” bands, which will bring more than 1,800 student musicians and dancers to perform at the 17th HBOB Invitational Showcase on January 25, 2020 in Atlanta.

The 2020 HBOB Invitational Showcase will feature high-energy performances and showmanship from the following eight bands: 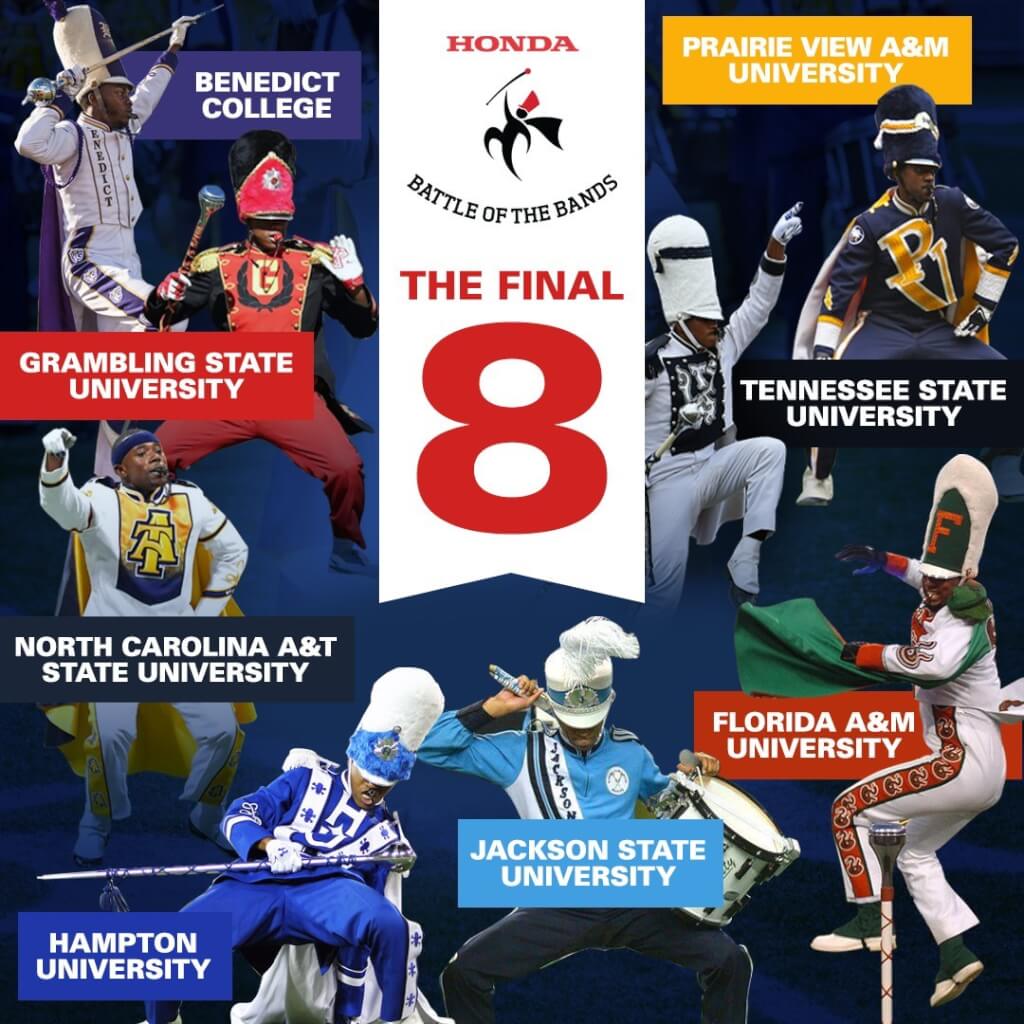 Honda invited all HBCU marching bands to participate in this year’s program. The “final eight” bands were selected from among 38 bands that chose to participate through a voting process that included fans, band directors, HBCU school presidents and Honda representatives. The four bands that received the highest number of votes automatically secured their spots in the lineup while the other four bands were selected by the HBOB committee.

Each of the eight bands will receive a $20,000 grant from Honda to support their music education program, as well as an all-expenses paid trip to the Invitational Showcase.

“Marching bands are the cornerstone of HBCU culture, and through Honda Battle of the Bands, we are able to bring together students, alumni, fans and supporters in celebration of their incredible talents,” said Steve Morikawa, vice president of Corporate Relations and Social Responsibility for American Honda. “Honda congratulates all eight bands and we look forward to an inspiring day of entertainment, showmanship, and school spirit.”

Honda is committed to supporting HBCUs by investing in their music education and academic programming while also providing platforms to showcase their exceptional students. Through Honda Battle of the Bands and the Honda Campus All-Star Challenge academic quiz bowl, Honda has provided over $13 million in grants to HBCUs and touched the lives of more than 200,000 students over the past three decades.

For more than 60 years in the U.S., Honda has been committed to conducting its business in a sustainable manner and fostering a diverse and inclusive workplace. In addition, Honda strives to strengthen our communities in many ways, by giving back to society and the communities where its associates work and live. Accordingly, Honda believes in helping people reach their life’s potential through its focus on improving children’s health, inspiring underrepresented students and preserving the environment for future generations. Learn more at https://csr.honda.com/.