BASKERVILLE, VA — In a highly offensive move, John Deere has set up its own coalition to represent Black farmers, in an apparent effort to sidestep the boycott the National Black Farmers Association (NBFA) launched last week. Association President John Boyd declared, in an announcement that the 116,000-member group’s boycott of Deere will continue.

After years of discrimination and inequitable treatment by the iconic company, Boyd said the boycott was intended to draw attention to John Deere’s unfairness and gain respect and better responsiveness for Black farmers.  He charged that the company declines to participate in the NBFA’s annual 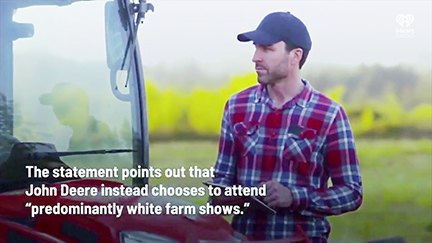 conference or display new equipment and parts as it does at other agricultural industry events. After Black farmers purchase from Deere, the company responds slowly, if at all, to calls for service on its equipment and shuts down its tractors by computer connections if owners try to make repairs themselves.

“Announcement in response to the National Black Farmers Association’s Call for a Boycott Against John Deere, a multi-billion dollar global behemoth, that it will create a Black Farm Group to ‘preserve heirs’ rights in rural communities, while also expanding additional work needed to improve the livelihoods of Black Farmers’ is one of the most offensive and egregious corporate missteps I have ever witnessed,” Boyd said.  “This is the equivalent of being rightly criticized on the facts by groups like the ADL and UnidosUS then creating groups to replace them.”

Boyd said the company that rakes in “billions of dollars a year is paying more money to consultants to blow up my phone line than it would cost them to provide inclusion and equality to their agriculture equipment customers who are black. Our boycott will continue and grow stronger.”

According to Boyd, Deere has demonstrated its apparent ill will against NBFA leadership by maneuvering around the association to form a group called LEAP, an acronym for “Leadership, Education, Advocacy and Production Systems.” It includes such disparate and non-farming member groups as the NAACP, to which Deere has donated in the past, and the Thurgood Marshall College Fund, whose only connection to the NBFA complaint is that Marc Howze, an administrative officer of Deere is a board member of the Marshall Fund.

Boyd said the Deere company’s claim that it has “supported the National Black Farmers Association through participation in the 2019 annual conference,” is false. NBFA members and conference attendees saw no such support, he said. Boyd’s statement included an e-mail message from Deere representative Andrez Carberry, the company’s Head of Global Talent Supply and Diversity and Inclusion, declining to participate or display any equipment at the 2019 – 29th Annual NBFA Conference held November 1-2, 2019 in Prattville, Alabama, dated October 15, 2019. Andrez wrote:  “We could not make it happen for display or personnel.”

Update: John Deere reached out to us with the following statement about the National Black Farmers Association and to share this press release announcing a coalition with the National Black Growers Council and the Thurgood Marshall Scholarship Fund to “preserve heirs’ rights in rural communities, while also expanding additional work needed to improve the livelihoods of Black farmers”: https://www.blackenterprise.com/national-black-farmers-association-calls-for-boycott-of-john-deere/

“The Boycott against John Deere will continue as we ask our NBFA members, African partners and allies to stop buying John Deere tractors, implements, mowers and parts,” Boyd said. “We remain open to new relationships with companies who value the work of NBFA members.”