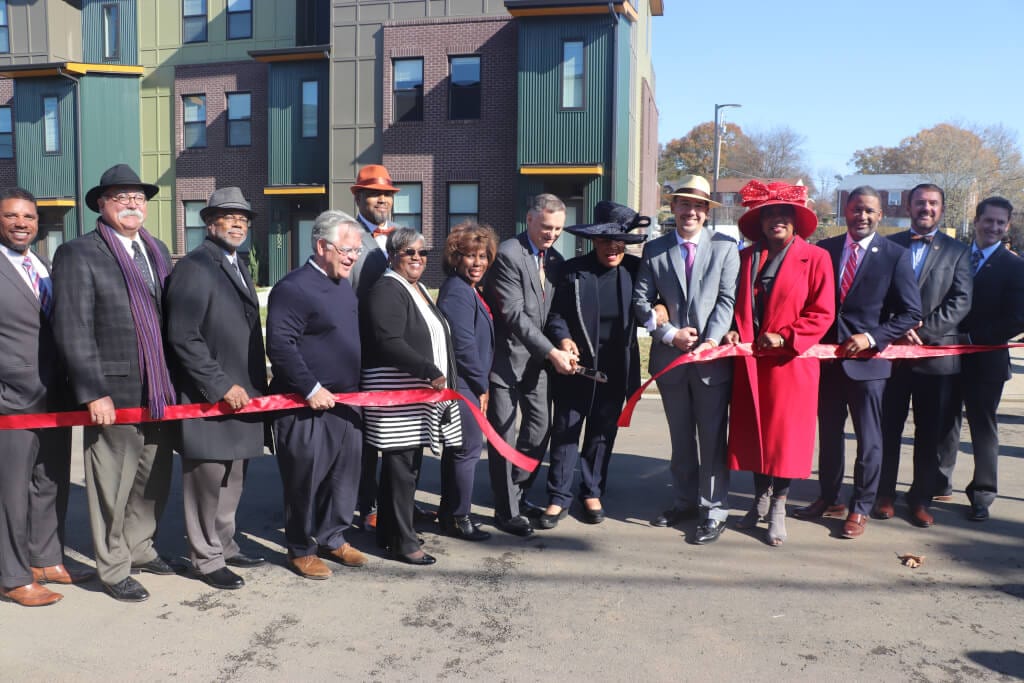 NASHVILLE, TN – Harper Cove Flats is named for State Senator Thelma Harper, the longest serving member of the Tennessee State Senate who is well known for her flamboyant hats.  Flashy headgear was worn by many at the ribbon-cutting November 19 at Hospital Lane in Bordeaux.

Building affordable housing in Bordeaux is a great idea but it hasn’t been easy. MDHA’s first proposal to build a Section 8 project on Hospital Lane met with stout resistance from the neighborhood.

Four years and many design changes later, the 40-unit Harper Cove Flats project is finally finished. It consists of four three-story buildings with 18 two-bedroom apartments and 22 three-bedroom apartments. Some will be available just after Thanksgiving and all will be ready to rent by New Year’s Day.

“This is an area of town that has always gotten things that Nashville didn’t want and so we wanted to get something that we could be proud of and I think Mr. Harbison and MDHA delivered on that,” he said.

Leonardo said current District 1 Councilman Jonathan Hall argued for a mixed income development that turned a $4 million project into a $9 million one. Hall negotiated with MDHA to build something “that would bring economic development to the African American community which it has not had for decades”.

“And who better to name it after than someone who fought for this community for decades – our former state senator, state representative, council member, neighbor and friend, the iconic Mrs. Thelma Harper,” said Hall.

Hall had an ally in Ruby Baker, President of Bordeaux Hills Neighborhood Association who Harbison called a magnificent leader.

“This is what we are supposed to do where we as public servants reach out to the community and they tell us,” said MDHA Executive Director Jim Harbison.  “We did many iterations to get it right. Mayor, you gave us the land. We could not do this without our city, our state government. Everyone was involved from soup to nuts,” he said.

Mayor John Cooper told the Tribune that he intends to create a Metro Department of Housing and staff it with professionals to deal with Metro’s housing crisis. There are an estimated 2300 homeless in Nashville, the stock of single family homes is shrinking, and about half of Nashville’s residents are spending more than 30% of their income on rent or mortgage payments.

People who pay more than 30% for housing are considered rent-stressed. Cooper and Harbison have had one meeting to map out a housing strategy. Both said the meeting went well.

MDHA is on a building binge to replace the old Cayce Homes project in East Nashville that were built between 1939-1941. The Kirpatrick Park Apartments were finished last month. They are already full. The 94 units house families of all incomes: subsidized, workforce and market-rate. Four of five MDHA Cayce projects are mixed income developments. That was deliberate. The idea is to build economically diverse new neighborhoods to replace the old crime-ridden projects. So far, it appears to be working.

MNPD reports show 57 crime records for the neighborhood in May 2019 and 49 records in October 2019. Robberies were up in October but weapons crimes were down.  No homicides occurred.

More than half of Cayce’s 800 families are still living in the old Cayce Homes while they await their new digs. The Cayce Master Plan calls for more than 2,000 units and ensures a one-for-one replacement of the subsidized units while adding new workforce and market-rate units. That will probably take another ten years.

Building affordable housing is a big challenge in Nashville and other big cities because gentrification is happening a lot faster than preservation and new fair housing projects like the ones MDHA builds.

Market rate builders and non-profit developers are engaged in a lop-sided housing race to make Nashville “a city for everyone” as Mayor Cooper frequently said during his campaign. Affordable housing builders are running that race on one leg.

Developers have investors and the money to buy property when it comes on the market. They can act quickly and have transformed much of East Nashville and the Nations district in West Nashville in the last five years. (see Gentrification)

Making money for investors is the principal reason why there is so much growth in Nashville. MDHA is all about affordable housing and they have to find the money to build homes for people at prices they can afford to pay.

“We have plenty of land,” Harbison said, referring to properties MDHA owns. While that is an advantage, leveraging grants from state and federal agencies is required and getting commercial bank loans is sometimes necessary before MDHA breaks ground on any new construction project.

Harper Cove Flats, for example, cost $9 million. MDHA had $5 million and floated a $4 million loan from First Advantage Bank in Clarksville. It will repay the loan from rent it collects on the apartments.

“I think Bordeaux can be the shining example of how you use a redevelopment district’s economic tools to advance affordable housing in Nashville,” Harbison said.

Wearing a dark blue outfit with a large blue hat and dark earrings, a smiling Senator Harper said she never could have imagined such nice apartments so close to where she protested the Bordeaux Landfill 30 years ago. She recalled how two friends lay down with her in front of dump trucks. “We got up at 7 o’clock one morning and decided we were going to do whatever we wanted. You know, we went to jail for that. And we kept on doing it,” Harper said.

“And there is no dump in Bordeaux anymore, “ she added.

“I’ve never lived in an apartment before. I think somebody should give me one of these apartments,” Harper said.  The crowd laughed. After the ribbon cutting there were refreshments. “If she’s serious we’ve just rented our first apartment,” Harbison said.

Thanks to Cooperation and Coordination Through Disasters, We’re Fighting Back