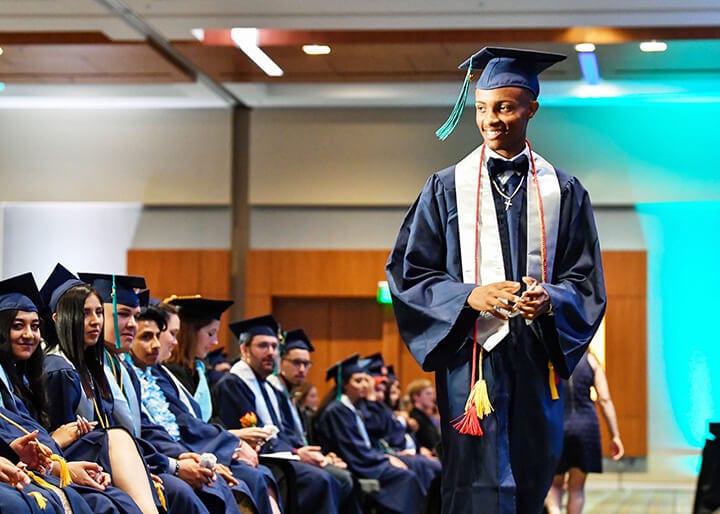 NASHVILLE, TN — Members of STEM Preparatory Academy’s 2011 founding fifth-grade class recorded another first today by receiving their high school diplomas and becoming the school’s inaugural graduating class. The ceremony highlighted and celebrated the diversity of the students, the vast majority of whom are students of color. Every graduate will be going on to attend a college, university or post-secondary technical program.

STEM Prep is a public charter school founded in 2011 in South Nashville to primarily serve students who are part of historically underrepresented groups in the fields of science, technology, engineering, and math. The school offers these students a secondary education strategically focused on STEM. Today, the school serves nearly 1,000 students in grades 5-12, a majority of whom are students of color and English Language Learners.

Attendees at today’s graduation ceremony were greeted by a mariachi band in the lobby. Brief videos played throughout the program featured soundbites from the graduates thanking their families and speaking to the adversities they had to overcome. The entire program was translated via livestream video into Spanish and Arabic to accommodate the large number of non-English speaking families.

The 95 members of the graduating class received a total of 152 scholarships valued at over $3 million. The awards include seven graduates who received scholarships from Equal Chance for Education, which is specifically designed to make college more accessible and affordable for undocumented students in Tennessee who are often charged out-of-state tuition despite being state residents.

The valedictorian Xeria Keys is a QuestBridge Scholar and received a full scholarship to attend Vanderbilt University with an interest in studying engineering. During her valedictorian address, Keys spoke about the unique challenges faced by minorities in today’s society and how the experience at STEM Prep has prepared them to disprove and overcome negative stereotypes.

“Our beautiful school community is comprised of minorities. With the current fracturing of American communities due to unjust immigration policies, police brutality, and corrupted politics, the system isn’t built for us; in fact, some may say the system is designed to oppress us. Minorities are stereotyped to be violent, poor, uneducated, uncivilized, and the list goes on. After today, our journey to navigating the real world begins. No matter what career we pursue, whether it is engineering, teaching, biology, or writing, there likely will be a glass ceiling placed over our heads, limiting our opportunities because of what we look like, where we come from, what language we speak, or where we worship,” Keys said.

“At STEM, we have all come face-to-face with our differences because our community represents countries from around the world. Our daily environment recognizes our differences and respects them; unfortunately for us, the world will not always be as kind. We must remember that it is our differences that make us unique and strong enough to shatter any ceiling … Each of us has shattered the expectations placed on high school minorities by graduating from this top-ranked rigorous academic institution today. It has been a long journey of success, failure, happiness, disappointment, anxiety, and triumph, but if there is one lesson I want each graduate to leave with, it is that you control your own destiny,” she said.

Nashville Mayor David Briley delivered the commencement address at today’s ceremony, calling on students to write their own future, to call out oppression and unfairness when they see it and come back after higher education to help lead the city forward.

“I’m pretty sure among those sitting in front of me is a future mayor because you look like our city, you are our city and our city would be lucky to have one of you as our mayor,” Mayor Briley said. “I ask you to match your courage with persistence and hard work. Because none of the things that need to change are easy to change.”

Dr. Kristin McGraner, the founder and executive director of STEM Prep, said: “Each of these individuals exemplify the highest ideals of our institution and have lead meaningful, transformative change in our communities that directly advances the college and career outcomes for our STEM Prep students. For a community with roots all over the globe, we believe knowing and honoring one’s roots is everything and each honoree has an important role in building the story of STEM Prep over these last eight years.”

Dr. McGraner founded STEM Prep eight years ago because of her deep belief in offering every child, regardless of race or socioeconomic status, the opportunity to reach their full potential. Dr. McGraner’s remarks to the graduates included personal reflections on each of them individually, highlighting a specific trait or gift she hopes they will share with others in the next chapter of their lives.

“It’s our STEM Prep mission to not only graduate you from college, but ensure we’re preparing you to be steadfast and persistent problem solvers, active leaders in our community, and highly engaged and empathetic citizens of the world. So that you can give. So that you can give of yourself, your knowledge, your talents, your passions, your skills to this world, in service of others. So that you can give back this education you’ve earned at STEM Prep,” Dr. McGraner said.

“Share your wisdom, your experience, your truth, and importantly your voice, your powerful voice, with others so that they, too, can learn. When we share what we get, when we pass on the learnings we’ve received, and we do so in service of our community, this is to have succeeded. And, scholars, you’re already succeeding because you are, indeed, the most mission- and service-driven group of human beings I have ever had the honor to know. Perhaps without knowing it, you have already made countless lives breathe easier because you have lived. And you’ve taught us all the power of giving, of serving, of loving even when we may not have much. And now, as you enter college and this next chapter of your lives, it’s time to pass on what you’ve received. To give away what you’ve earned. To use your life to transform the lives of others,” she said.

STEM Preparatory Academy is a public charter school serving students in grades 5-12 in Metro Nashville-Davidson County. STEM Prep is dedicated to delivering a rigorous, inquiry-based education with a strategic focus on science, technology, engineering, and mathematics. By cultivating a community of learning and academic excellence, STEM Prep will bolster the number of underrepresented students who graduate from the most competitive postsecondary programs and universities in the country and lead the discoveries and innovations of the future.