KARACHI, Pakistan — As Pakistan grapples with containing and eliminating Islamic State (ISIS) terrorists in the country, as well as terror financing, an engineering student has been arrested on charges of international terror financing.

Omer bin Khalid, a final-year student at Karachi’s NED University of Engineering and Technology, was arrested on Jan. 18. He had been released on bail last month after his initial arrest by the Counter-Terrorism Department of the police on suspicion of gathering funds for ISIS.

“After a forensic analysis of Khalid’s mobile phones, we came to know that he had links with the militant organization and was sending money to Syria,” said Omer Shahid Hamid, deputy inspector general of the Counter-Terrorism Department of Sindh Police. “Khalid used to send cash to his accomplice in Hyderabad, who used to send the money to Syria through bitcoins.”

Hamid said that so far, Khalid had sent more than a million Pakistani rupees ($6,224). An associate of Khalid was also arrested on similar charges.

While bitcoin is not illegal or banned in Pakistan, the State Bank of Pakistan (SBP) on April 6, 2018, warned that virtual currency exchanges could be used to launder money and issued an advisory notice against the use of cryptocurrencies.

“The SBP has not authorized or licensed any individual or entity for the issuance, sale, purchase, exchange or investment in any such virtual currencies/coins/tokens in Pakistan,” said the notification. It advised banks and payment service providers “to refrain from processing, using, trading, holding, transferring value, promoting and investing in virtual currencies/tokens.”

There is “a great need to understand the full potential for terrorist use of cryptocurrencies, including options for identifying and tracking their use, the sophistication and technological capability of terrorist groups, and the potential for such use to increase in the future, given expected technological developments,” a 2019 report by U.S. think tank Rand Corporation states.

Analyst Amir Rana, director of the Pak Institute for Peace Studies in Islamabad, said that the use of cryptocurrency by militant groups is nothing new.

“Cryptocurrency was also used by al-Qaeda,” he said. “Since it is a digital currency, it is easier for militant groups to cash it anywhere in the world. We may see an increase in usage of virtual currency by the militants in the future.” 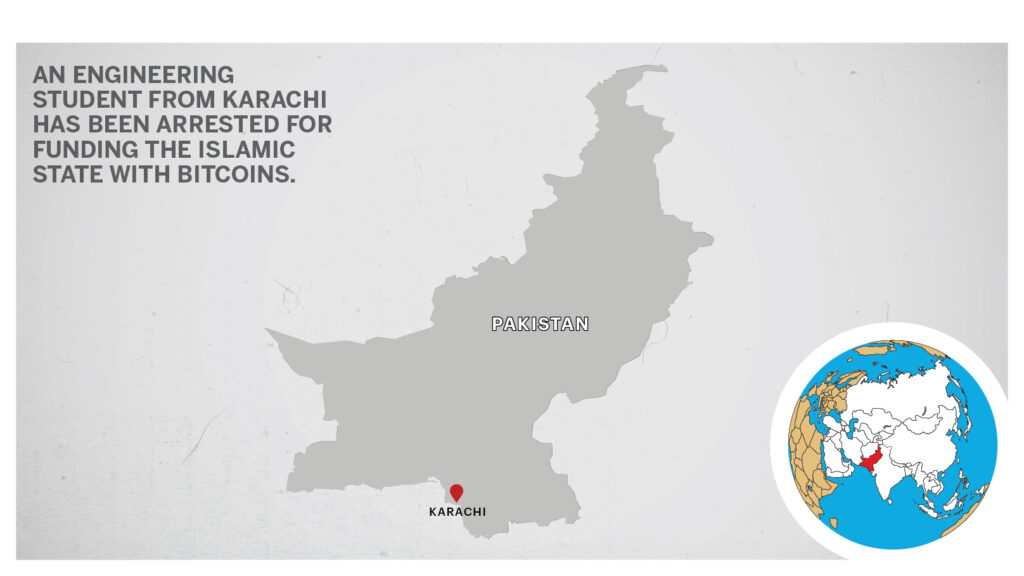 The U.S. Department of Justice in August 2020 announced the disruption of three “terror finance cyber-enabled campaigns” involving the al-Qassam Brigades, Hamas’s military wing, al-Qaeda, and the Islamic State of Iraq and the Levant (ISIS).

“These three terror finance campaigns all relied on sophisticated cyber-tools, including the solicitation of cryptocurrency donations from around the world,” the Justice Department said in its announcement.

Rana said that Pakistan is already under tremendous pressure to take action against terror financing.

“The Financial Action Task Force has already given Pakistan till February this year to address anti-money laundering and terror financing issues,” he said.

Since June 2018, Pakistan has been on FATF’s grey list of countries being monitored by the watchdog. Countries that FATF judges to be non-cooperative in combating terror financing and money laundering are placed on a blacklist.

How money was funneled to terrorists

Hamid, of the Sindh Police Counter-Terrorism Department, said the families of some militants in Syria were of Pakistani origin and “most of them traveled to Syria from Punjab, particularly provincial capital Lahore.”

“The families of militants in Syria are Pakistani women who had gone there and married IS militants,” Hamid said. “These women are in contact with jihadis in Pakistan and seek funds. Khalid and his accomplice have been sending funds to Syria for the last two years.”

“Daesh (ISIS) and Jamaat ul Ahrar [identified as being associated with ISIL or Al-Qaida] now have access to major educational institutes of the country,” he said in a briefing on April 17, 2017.

He also showed a video in which Noreen Laghari, a student at Liaquat University of Medical & Health Sciences in Jamshoro, said that she “was to be used by Daesh as a suicide bomber and the target was the congregation at a church in Lahore on Easter. But I was arrested a few days before the attack.”

In another case, Saad Aziz was sentenced to death by a military court on May 12, 2016, for killing 48 Ismaili Muslims in Karachi in March 2015 and murdering human rights activist Sabeen Mahmud. Aziz was a graduate of the prestigious Institute of Business Administration in Karachi, and his arrest for plotting terrorist attacks sent shock waves across the country.

The United States Institute of Peace says that Daesh, Arabic acronym of ISIS, announced the establishment of its formal affiliate in the Khorasan, a region encompassing Afghanistan, Pakistan and other nearby lands, on Jan. 26, 2015. It nominated the former leader of Tehreek e Taliban Pakistan, Hafiz Saeed Khan, as its leader.

There is currently no evidence of Daesh’s central leadership directing terrorist activities in Pakistan, but its ideology has inspired individuals and groups to recruit, raise funds for and carry out attacks to demonstrate their support.

On Jan. 11, Maj. Gen. Babar Iftikhar, director general of the armed forces media wing, said that there was external support to create a Pakistan wing of ISIS, but Pakistan did not allow the militant group to establish a permanent footprint.

“But let me assure you that the IS presence is not much,” he said. “It’s there, they’re trying, there are splinter groups of different organizations which keep taking that [IS] name just to gather some … credibility, but we are taking care of that. So it’s not a big issue.”

However, on Jan. 3, 11 coal miners from the minority Hazara Shiite community were brutally killed by the Islamic State in the restive province of Balochistan.