Save Our Fairgrounds attorney Jim Roberts asked Rose if there was sufficient space to hold a fair if a soccer stadium and 10-acre private development were constructed at the Fairgrounds.

Rose said the State Fair used to have a fencepost to fencepost lease of the entire Fairgrounds property to put on the fair. It had between five and six thousand parking spots.

“I do not believe that 2000 parking spaces would be sufficient for operating the fair in the manner and at the level we have operated it throughout the period from 2010 to 2019,” he said.

Roberts presented a series of slides using Metro’s own figures to show that not even 2,024, but only 616 parking spaces would be available to the Fair, a 90% decline. 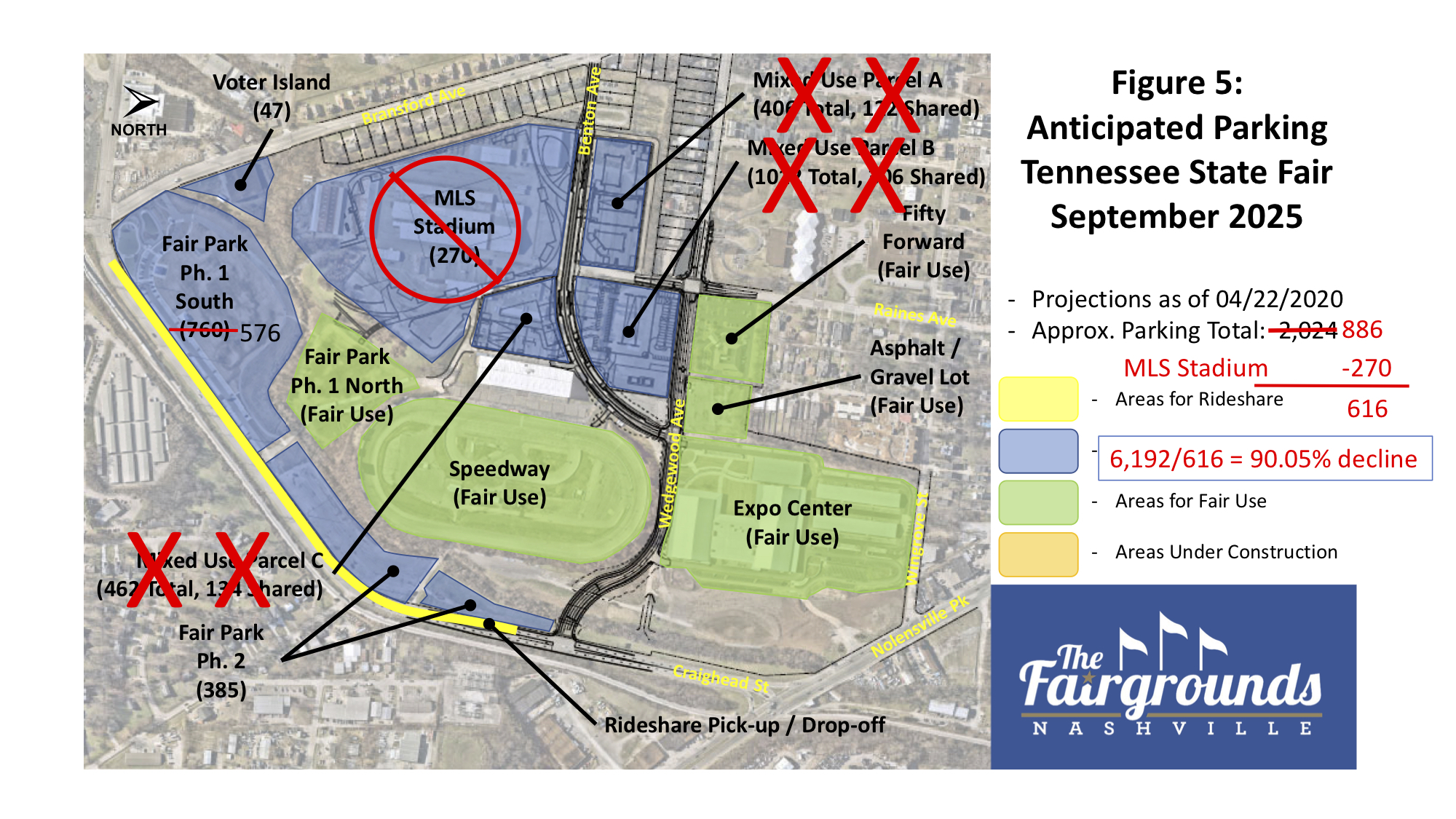 Roberts methodically attacked Metro’s parking estimates to show that after losing 25 acres for the stadium and 10 acres to Mixed Use development, parking would decrease by 45%-90% depending on the event.

Two years ago in Lyle’s court, Roberts argued the soccer deal would harm his clients, flea market vendors and Save Our Fairgrounds. But he had no proof because Metro hadn’t done anything yet with the 25 acres where they plan to build the stadium.

Roberts also argued that Fairground operations have been self-sustaining for decades from rents and parking fees. He told Chancellor Ellen Hobbes Lyle that there would not be enough parking if the stadium was built and that Metro was prepared to give control of Fairgrounds parking to Nashville Soccer Holdings. But Roberts couldn’t prove that either because nothing was in writing yet.

But now the cat is out of the bag.

Metro attorney Lora Fox had claimed there would be enough parking and that the 10-acre mixed-use development would share its parking with other events. But in the contract signed July 22 between the Fair Board and Nashville Soccer Holdings Development LLC there is no provision for shared parking.

“Not one parking space will be available to the Fair Board at the mixed use development for any reason whatsoever,” Roberts said. “They are not going to share parking for the next 99 years because that’s what the contract says.”

In the past, the Fairgrounds always turned a profit because the Fair Board kept 100% of parking revenue for all events except the Tennessee State Fair. It also received concession fees and booth rental fees. Promoters paid a fee to produce events at the Fairgrounds. In short, the Fair Board provided a venue for events but they took a cut one way or another.

Roberts said Fairgrounds contracts used to have a provision allowing the Fair Board control from a monetary point of view. The board expected their cut because lessees were using Fairgrounds property. But all that will change if the deal goes through. “Whether it was a race or a cascade plunge, or a roller coaster, they knew what was going on and they had a 90-day right to cancel any event. There is no right to cancel in the new contract and Walsh Management has the authority to hold events that compete with the Expo Center and the flea market. They could do their own races or sports events. They could put the Expo buildings out of business,” Roberts said.

The question of parking has consumed a lot of the testimony. Roberts produced a 34-slide Powerpoint showing that Metro’s claims about available parking spaces for various venues were either misleading or false. Taking the number of parking spaces from Metro’s own parking expert, who estimated parking in various parts of the Fairgrounds, plaintiffs showed the number of spaces available for “existing uses” dramatically decreased if a stadium took up about 25 acres of parking that now exists and commercial development took up another 10 acres.

The only time it would work Roberts said would be on a day with no race and then people could park on the speedway. Even so, the reduction of parking by half or even more would eventually bring about the end of existing uses at the Fairgrounds. The city charter stipulates that those traditional uses must be protected. That is the central and fundamental issue Chancellor Ellen Hobbes Lyle must decide.

According to the plaintiffs’ analysis, if the stadium were built, car racing would have enough parking for the crews and drivers in the “Pit” behind the raceway but not enough for the fans. Similarly, with the number of spaces cut by 53%, flea market attendance would be cut in half.  “If that happens, then vendors drop out, and it all collapses and that is what they intend,” Roberts said. Whether or not Metro has shown bad faith and hiding their true intention to abandon traditional uses of the Fairgrounds, is something Roberts is slowly and methodically trying to prove.

The lease for the mixed-use development is $200k per year and goes to the Fair Board.  “That’s so under market,” said Roberts. He said the Nashville Soccer Holdings Development group stands to make at least $15 million a year with the property. “On $200 thousand in rent, that’s a very good deal,” he said.

Mayor John Cooper, once a staunch opponent of the stadium, renegotiated the terms of the deal with principal team owner John Ingram. Walsh Management has to pay stadium rent equal to the bond payments the Sports Authority must pay to retire the $225 million in bond debt. “When they do, they get the stadium for free up to 75 years,” Roberts said. It’s a convoluted deal with a shady history.(See Fixed )

Some money will come from ticket sales, from concessions, from broadcast rights, from sponsorships and commercial endorsements, and between $1-2 million a year in parking fees, according to Roberts. That is money the Fair Board will never see.