NASHVILLE,  TN — The time has come for all fake meetings and feasibility studies every year to end, and action taken regarding the historic Morris Building. This has long been and remains the ideal place for our Nashville Civil Rights Museum. This city’s history of Black achievement and significance is one of the few places in the nation with multiple Black colleges and a vibrant, active social justice and Civil Rights legacy.  Nashville should be embarrassed that it has no Civil Rights Museum yet it spends millions on projects that only benefit the white community.

No one is denigrating or taking anything away from the Civil Rights room in the downtown public library as we are also thrilled about our sister National African American Music Museum. Both of these are vital and necessary additions to Nashville’s cultural dynamic. 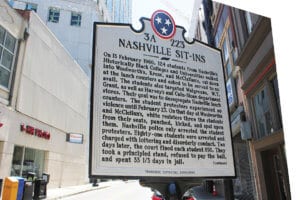 But Nashville must have a separate structure that houses, spotlights and celebrates the spectrum of Black achievement, contributions, and struggles for justice, equality and economic empowerment. The Morris building was built and owned by one of Nashville’s famous pioneer families and should be used as a Civil Rights Museum on a daily basis.  It will provide a major tourist attraction, and serve as a showcase for a city’s genuine alleged progress, particularly one with the history of both turmoil and improvement that Nashville Mayors have boasted about.

It’s truly an insult  that Nashville  with 26 white museums,  and 182,577, blacks is the
only major Tennessee city without a Civil Rights Museum and this is the Capitol. Even Knoxville, with 30,567 Blacks, has had the Beck Cultural Center since 1975, and it has steadily evolved into a major part of the city’s cultural and
tourist landscape.

Chattanooga with 57,374 Blacks, has the Bessie Smith Cultural Center established in 1983 and is now among its strongest and most visited tourist sites in Tennessee. Memphis with 417,843 Blacks, is a great example of how a Music Museum can complement a stand-alone Civil Rights Museum. The Civil Rights Museum was created in 1991, and Stax Music of American Soul Music followed in 2003. Today, both attract thousands of visitors each week to the Bluff City and are a major part of their advertising and public relations campaigns.

I am not asking the city to provide us with anything that’s not already available. A developer need not go to any great lengths to make changes in the Morris Building. It’s already in the best spot given its distinguished history. To change it erases our history in downtown Nashville forever. The Morris Building was built in the 1920s by one of the nation’s first Black-owned architecture firms as the publishing arm of America’s largest religious denomination, the National Baptist Convention. It’s tailor-made to be adapted into Nashville’s Civil Rights Museum. Given the availability of materials already there it could far more quickly be assembled and ready to go than in other circumstances where you’d have to bring in people unfamiliar with the city’s past, then have them spend months, if not years, doing background research using our tax dollars for their pockets.

Nashville continues to position itself as  “It City,” but most of the things that are touted only benefit a select handful of white citizens and never the African American Community.

Massive developments that  produce upscale apartments  for the newly arrived  white employees and deals for professional sports teams owned by whites are one thing but institutions that can benefit the entire population, spotlight both the past and present, and attract diverse audiences from across the nation and around the world on a daily basis, as opposed to a periodic or occasional basis, is something else.

Here’s an opportunity for this city to finally do something major that recognizes and celebrates its Black population, yet simultaneously  benefits all its residents. It won’t require anything other than purchasing an already standing structure, then letting those with a knowledge of museum creation take over and turn it into a world class institution.

NOTE:  The Black Community lost another battle with Nashville’s white power brokers and now own our African American Morris Building.

It reminds me of our history here in Tennessee, where our ancestors land was stolen through racism, violence, rape and murder. Today whites in “It City,” better known to some as “S..City,” just buy or force Blacks out of our property and gleefully destroy our history as they did in this case. Nashville has a history of forcing Black Nashvillians to be consumers so white heirs from generation to generation, benefit financially on our Black backs. Whether through denying employment, or obtaining property owned by Blacks for generations or through eminent domain.   I am told the next gentle push is to obtain Black properties on Jefferson Street, from 8th avenue to Tennessee State University including the Tennessee Tribune Building and excluding the churches. Is this real or fake news?

First Horizon is Helping its Customers During Challenging Financial Times

Feeding the Children in the Midst of Covid-19