NASHVILLE, Tenn. (October 17, 2017) – Mayor Megan Barry unveiled today Let’s Move Nashville: Metro’s Transportation Solution, a plan that aligns with the IMPROVE Act passed earlier this year. In early 2018, Metro Council members will be asked to put the plan on the ballot for the May 2018 countywide vote.

“Investment in transportation today is an investment in Nashville’s future. More transportation options will make life better for Nashvillians, whether you moved here last summer or you’ve spent your entire life here, and it will ensure that the city continues to be a great place to live when today’s children have children of their own,” said Mayor Barry. “This comprehensive transportation solution will connect more neighborhoods with each other and open the door even wider to the city’s job, education and entertainment centers. We will make sure that no one is left behind.” 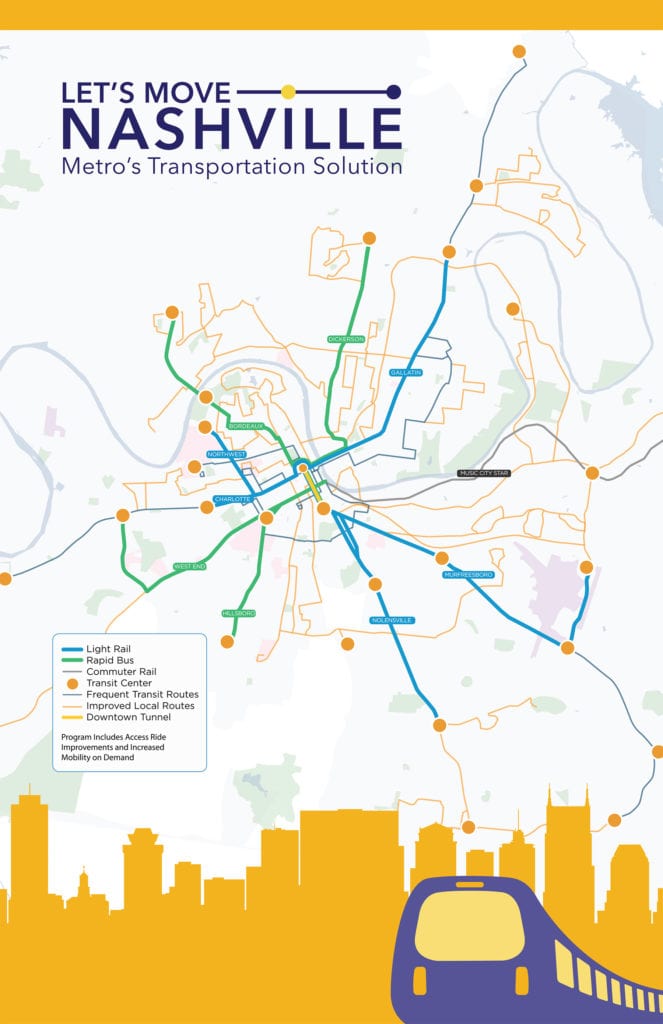 Let’s Move Nashville is a $5.2 billion infrastructure investment that will be funded by a range of fees, including business, sales and tourism taxes. The plan originated after many years of study and community engagements through the nMotion strategic plan, which was led by MTA and RTA, as well as coordination at the state and local level. It includes 27 miles of Nashville’s first-ever light rail system, four rapid bus routes which will offer a dramatic increase on the service and frequency, and a strategy of service and infrastructure improvements.

Details of the plan are:

“nMotion was a great starting point for a comprehensive transit plan, but I believe we were able to make it even better by making sure North Nashville was included in the light rail transit network,” said Mayor Barry. “I worked closely with MTA Director Steve Bland and our regional mayors to find a solution that will allow for light rail to run on existing freight lines that will connect residents, businesses, colleges and universities in North Nashville to the network in a way that result in better access to jobs and opportunities.”

Metro’s transportation solution would not be possible without the passage of the IMPROVE Act earlier this year. This legislation, in addition to funding road and bridge projects across the state, authorized local government to collect surcharges on various taxes and fees currently being assessed by the local government, if approved by voters by referendum. Metro will seek federal grants where available, while also utilizing four surcharges to fund the project implementation and long-term maintenance of the system:

“It’s important to me that we  are equitable and fair with the taxes used to pay for transit, while understanding the need for a bold, comprehensive transportation system that will address Nashville’s needs now and in the future,” said Mayor Barry. “This is a balanced funding proposal that will ensure that visitors and out-of-county residents who may use our roads or transit system will pay their fair share along with residents who will have access to better jobs and transportation options as a result of this proposal.”

Mayor Barry has also focused on equity and affordability as a component of Metro’s transportation solution. Under the proposal, fares for Nashville residents living at or below the federal poverty level will be eliminated, with additional reduced fares for young students, seniors, and disabled Nashvillians.

“We will make sure local workers and small, minority, and women-owned businesses have the opportunity to compete for the jobs and contracts that result from this enormous investment in Nashville’s future,” said Mayor Barry. “I’m absolutely committed to making sure there are community benefits to this project that go far beyond the better transportation options, because this is about equity, access, mobility, and opportunity for all Nashvillians.”

In an effort to help further shape policies around affordable housing, including how best to use the transit-oriented development district legislation that allows Metro to capture and invest revenues along the transit corridors into affordable housing, Mayor Barry intends to create an affordability and transit task force in the coming weeks to address the needs of working families.

“Better public transportation means access to better jobs, better health care, and better schools for Nashville’s residents,” said Walter Searcy, board member of the Metro Transit Authority and spokesperson for the Transit for Nashville campaign. “I appreciate Mayor Barry putting out such a bold transit plan, and her commitment to ensuring affordability, equity, and access is at the forefront of the discussion.”

In an effort to engage and inform the community on Metro’s transportation solution, the Mayor’s Office, Metro Public Works, and MTA will be hosting a series of open houses throughout Davidson County, starting with neighborhoods along the light rail corridors:

Once the transit improvement plan is fully reviewed by the community and approved by an independent CPA firm with criteria set forth by the Tennessee State Comptroller’s Office, the Metro Council will be asked to consider an ordinance that will authorize the plan to be placed on the ballot for the May 1, 2018 election.

“We must act now to address the need for better transportation options if our city is going to continue to grow and thrive in the future,” said Vice Mayor David Briley. “The Metro Council will carefully review Mayor Barry’s proposal and give every resident of Nashville a chance to be heard before Metro’s transportation solution goes to the ballot.”