For most boxing fans, they remember Joe Frazier strictly as the establishment champion, the man that mainstream society backed against the people’s champ Muhammad Ali. They
recall the three spectacular fights, two of them won by Ali. They also remember how Ali ridiculed and taunted Frazier, something that he later in his life publicly admitted he regretted doing and acknowledged he’d taken things too far and into the area of cruelty. 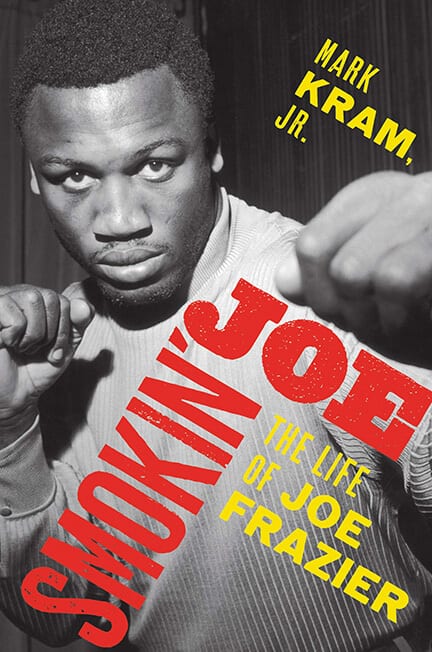 But the Frazier story is also a very complex one, which outstanding writer Mark Kram Jr. examines in detail throughout a gripping and compelling new book “Smokin’ Joe Frazier: The Life of Joe Frazier” (Harper Collins). If the name seems familiar, it’s because the author is the son of a legendary boxing and sports writer Mark Kram. His father’s book “Ghosts of Manilla” in many ways laid the foundation for what Kram Jr. does in his book with one exception: he’s gotten more intimate details about Frazier, his family background, and the equally thorny and messy relationship between Joe and his son, Mavis, who becomes a heavyweight contender, but never wins the title.

Frazier was born in the Jim Crow South, the youngest child in a family of thirteen. That immediately had an impact, as he grew up accustomed to not having much and battling for whatever he could. The book deals with Frazier’s increasing bitterness as many boxing fans turn him into the enemy.

They either overlook or forget the fact that at one point during Ali’s most down period, Frazier loans him money. He also is a supporter, saying that what’s happening to him isn’t right. Ali was smart enough to seize the moment and capitalize by turning their fights into an us vs. them scenario, with Frazier presented as the symbol of comfort and going along with injustice rather than fighting it. Frazier later goes through some even rougher times, losing his title and then being roughed up by George Foreman in a title bout. He was knocked to the canvas multiple times, and he describes the shattering feeling of failure he experienced.

Then there’s the tenuous relationship with his father. I’ve always felt that there are some situations where families shouldn’t work together, and this was clearly one where the father’s undeniable gifts made him less able to understand why his son wasn’t a better fighter. He also lamented the fact that he’d twice failed to defeat Ali, and that boxing estranged him from his family.

Fortunately, near the end of his life, Joe Frazier reconciles with family and also makes peace with Ali, albeit grudgingly. “Smokin’ Joe Frazier” is both a fine expose and a candid, objective look at the excesses of 21st century sport and the damage that three epic bouts did to both Muhammad Ali and Joe Frazier.