NASHVILLE, TN — The Nashville Predators have known for weeks who they will face in the qualifying round of the Stanley Cup Playoffs. But last Friday they learned when they will be playing the Arizona Coyotes and where the games will be held. The Predators/Coyotes series will begin Aug. 2 in Edmonton, Alberta. Edmonton is serving as hub city for 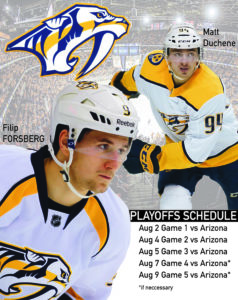 all the Western Conference games. The second and third games in the best-of-five series will be Aug. 4 and 5. If it goes the full series, games 4 and 5 are set for Aug. 7 and 9. At press time the broadcast networks and starting times had not been decided.

The NHL and NHL Players Association ratified a four-year extension to the current collective bargaining agreement (CBA) on Friday as well. That extends the CBA through 2025-26, while also mandating the resumption of the 2019-20 season. The Predators and the other 23 teams in the playoffs reported to training camps Monday. That was also the deadline for any players who wanted to opt out of the playoffs.

The games will be held without fans. There will be five or six games a day to start the playoffs.

Teams in the qualifying round will play 52 games before teams take a break Aug. 10 for the NHL draft lottery. Each of the eight teams that were eliminated have an equal chance of winning the number one pick. The actual first round of the playoffs begins Aug. 11. Teams will be re-seeded after every round, and all other playoff series will be best-of-seven.