Islamabad — Pakistan’s troubled southwestern province of Balochistan and the mountainous regions of Waziristan are seeing a resurgence in terrorist activities. In the latest incidents on Oct. 15, some 20 soldiers and civil security personnel were killed.

The province is home to Islamist, separatist and sectarian insurgents.

In the first incident on Oct. 15, a convoy of the state-run Oil & Gas Development Company and the Frontier Corps was ambushed and attacked by a “large number of terrorists,” the country’s armed forces media wing said in a statement. Seven from the Frontier Corps and seven security guards were killed. In the second incident, six soldiers, including an officer, were killed in a terrorist bomb attack in north Waziristan.

According to media agency, the incident in Balochistan occurred on the Makran Coastal Highway in Ormara. “Substantial losses were also incurred to the terrorists during the clash,” the army statement said.

Balochistan holds strategic importance for the China-Pakistan Economic Corridor, Beijing’s Belt and Road initiative, which seeks to connect China’s western province of Xinjiang with Gwadar, Balochistan, and China’s access to the Arabian Sea.

The resource-rich province, which borders Afghanistan and Iran, has been plagued by sectarian violence, attacks by Islamist militants, and a separatist insurgency that has left thousands of casualties since 2004.

In April 2019, the alliance killed at least 14 people, including 11 navy, air force and coast guard personnel. The gunmen targeted the personnel from seven buses in the Buzi Pass area near Ormara based on their computerized national identity cards. 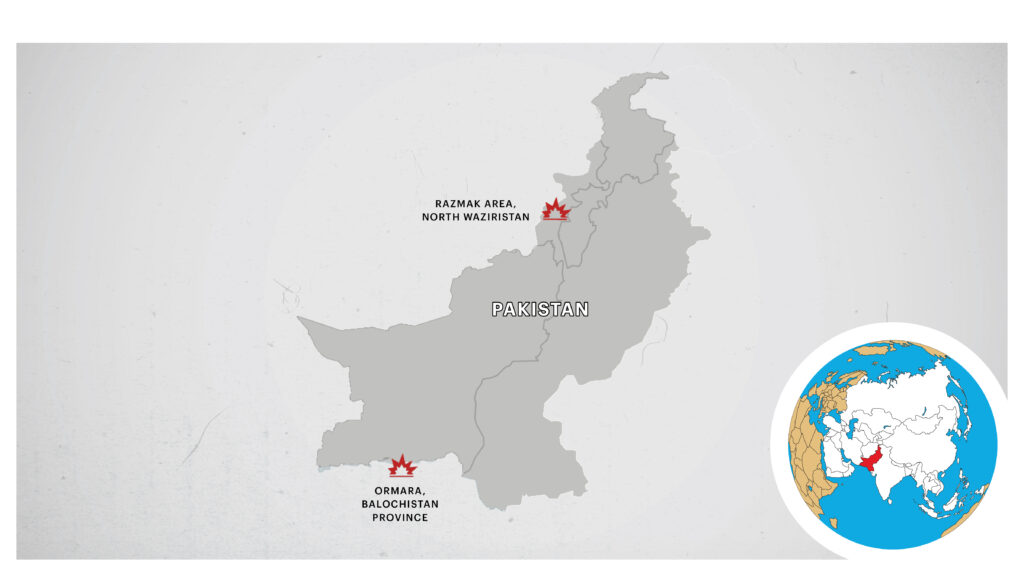 “Although the frequency of the attacks carried out by the Baloch insurgents is not very high, it is definitely regular,” said Amir Rana, a security analyst. “It also shows the recent reports about the division in these groups were not true. The coalition of the four banned militant Baloch groups is very much intact and as deadly as it has been in the past.”

Rana said the attack on the Makran coastal highway is a serious development as it shows that the Baloch insurgents are still capable of carrying out deadly attacks.

Pakistan, which claims the training and logistics camps of the insurgents are in the area of Iran bordering Pakistan, has asked Iran on numerous occasions to take action against the Baloch insurgents.

After the Ormara attack last year, Pakistan’s Foreign Minister Shah Mahmood Qureshi said Islamabad has shared “actionable evidence” with Iran and also identified the location of the camps inside Iran. So far, Iran has taken no major action against these groups.

In the second incident on Oct. 15, security forces of Pakistan’s Army were attacked in the Razmak area of North Waziristan. They were victims of a terrorist IED (improvised explosive device) attack, the country’s media agency said.

Attacks on security forces in Waziristan are frequent, and several suspected terrorists have been killed in counterinsurgency operations.

The former tribal areas have seen an increase in attacks on security forces since the Zarb-e-Azb Operation in June 2014, in which Pakistan Armed Forces conducted a joint offensive against various militant groups. The offensive was in response to the June 8 attack on Jinnah International Airport in Karachi.

Last month, Jamaat-ul-Ahrar, Hizb ul-Ahrar, and Hakeemullah Mehsud — the three major factions of the radical terrorist group Tehrik-i-Taliban Pakistan, an umbrella organization of militant groups based along the Afghan–Pakistani border — announced their reunion. The factions had splintered in 2014 after the military offensive and over leadership issues.  The banned sectarian group Lashkar-e-Jhangvi, which operates in Balochistan, has also joined the terrorist alliance.

“Regrouping or re-merging of groups under the umbrella of Tahreek-i-Taliban Pakistan is a major development. As the Haqqanis are considered the major fighting force of the Afghan Taliban, the Mehsuds are the muscle of the organization,” said Tahir Khan, a journalist who covers the tribal areas.

Khan cited the Oct. 27  attack at a religious school in Peshawar, in which seven people were killed, as evidence that the militants’ attacks are not restricted to the tribal areas.

Journalist Haroon Rashid said, “In Balochistan, the alliance does not carry out attacks on a regular basis. The last attack by this coalition of Baloch militant groups was in April 2019, which resulted in the death of 14 security personnel. And, now this attack of Oct. 15 after more than a year and a half has claimed the lives of 20. The frequency of attacks by the group is less, but deadly,” said .

He said that the fight against the militants in Balochistan and the tribal districts could prove to be an uphill task as efforts by the military may be affected by political wrangling in the country.