Both TN Senators also took to Twitter Wednesday to condemn the actions of Trump supporters who stormed the U.S. Capitol.

“These actions at the US Capitol by protestors are truly despicable and unacceptable,” Blackburn said on her Twitter account. “While I am safe and sheltering in place, these protests are prohibiting us from doing our constitutional duty. I condemn them in the strongest possible terms. We are a nation of laws.” 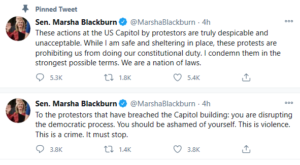 Blackburn when on to say, “To the protestors that have breached the Capitol building: you are disrupting the democratic process. You should be ashamed of yourself. This is violence. This is a crime. It must stop.”

Hagerty also posted a message on Twitter condemning the actions.

“What is happening at the U.S. Capitol right now is not peaceful, this is violence. I condemn it in the strongest terms. We are a nation of laws and this must stop,” Hagerty said.

Trump urged his supporters to come to Washington to protest Congress’ formal approval of Biden’s win.

Several Republican lawmakers including Blackburn and Hagerty have backed Trump’s calls, despite there being no evidence of fraud or wrongdoing in the election.

Rep. Jim Cooper (D-TN) posted on this Twitter account that he was safe and added “This is a dark day for America.”

“For the last 4 years @realDonaldTrump words have steadily worked towards this day of violence. Words have meanings and consequences. A life was lost due to rhetoric. Enablers @MarshaBlackburn, @BillHagertyTN @timburchett, etc. you are complicit in attempting to destroy democracy,” Dixie posted on his Twitter account.

October 22, 2020 Article Submitted Politics, Uncategorized Comments Off on Debate’s Racial Segment Circled Around ‘The Talk’ as Candidates Spar Over Future of Black America

NOT Voting for Hillary is a VOTE for a Pathological Serial Killer!

I have seen a lot of conventions in my life but NEVER one like the Republican National Convention last week. It began with flagrant plagiarism by Trumps wife. It got worse with lies and distortions, […]