Over the July 4th holiday weekend president Donald Trump made his re-election campaign strategy crystal clear. It’s the preservation and protection of white supremacy. He presented no policy ideas or second term goals. Nor were there new ideas or tactics for fighting the spread of COVID-19, which has already killed over 130,000 Americans, and is spiking in such states as Arizona, Florida, Texas and California. Trump said nothing about the issues of police misconduct and brutality, nor did he present any positive ways of battling economic disparity and the lack of opportunity disproportionately affecting millions of Blacks and people of color.

Instead, he went on the attack against those who have been demonstrating in the streets for weeks, the vast majority in a peaceful and lawful fashion, against police mistreatment and violence against African-Americans. The image forever 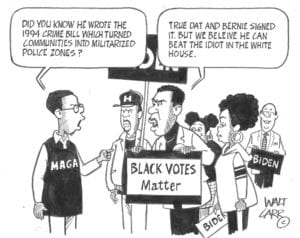 stamped in many folks’ minds was the video of a white cop standing on George Floyd’s neck for nearly nine minutes, with Floyd saying “I can’t breathe,” and Derek Chauvin acting as though he was doing nothing wrong. Instead, Trump characterized the protesters as “rioters, looters, anarchists, and Marxists,” using a bunch of reactionary buzzwords supplied him by some of the Neo-Nazi types in his inner circle.

Trump added that the “radical left” wants to “destroy our heritage” and “indoctrinate our children.” He claimed these forces want to overthrow the American revolution, and equated Confederate types like Robert E. Lee and Jefferson Davis with the soldiers who fought in World War II. He went so far in one speech to say protesters fighting for social justice were “nazis, facists, and communists.” Setting aside the political distortion since none of these groups espouse identical ideology, it was clear he was making the us vs. them distinction that has always characterized his politics.

Trump has endorsed and embraced racist themes and language well before he became president. He was part of the “birther” movement that claimed former President Barack Obama wasn’t a citizen, but a foreign Muslim national. He railed against Black NFL players exercising their constitutional rights to nonviolent protest, calling them “sons of bitches” and urging NFL owners to dismiss them.

Trump’s ignorance of history is glaring, so it’s obvious he’s utilizing the script provided him by his alt.-right buddies. Still, it’s a scary tactic because he’s clearly hoping the polls are wrong, and a lot more than 35 to 40 percent of the electorate support him. Ever since he uttered the “Make America Great Again” mantra prior to the 2016 election, Trump has never wavered in presenting what he thinks is the correct vision of this nation. 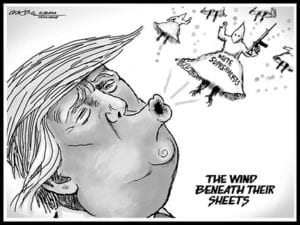 republic. They were merely misguided, good folks who were defending their homes and property. The fact that George Washington, Thomas Jefferson and Patrick Henry owned slaves should be seen as unimportant, just a minor character flaw. The hideous philosophies that Andrew Jackson, Theodore Roosevelt and Woodrow Wilson had regarding the inherent inferiority of Blacks and Native Americans also isn’t that significant, and pointing it out in school textbooks only demeans and diminishes their achievements.

By focusing on the vandalism and illegal activities. of a handful of protesters, Trump creates this imagery of rampaging hordes coming to attack the good white folks. He’s even talked about issuing an executive order gutting open housing laws in order to protect “the quality of life in the suburbs.” This is straight racist rhetoric masquerading as a defense of traditional American values and standing up for the nation’s heroes.

Most presidents have used the July 4th weekend to make speeches urging national unity and seeking a consensus towards making this  a better country. Trump used it to reaffirm his support for white supremacist ideas and his opposition to substantive change. He’s going to accelerate these attacks in the days and weeks ahead, and his allies are going to gear up their voter suppression efforts.

Trump fears a huge turnout by people of color, educated women, and young people, the coalition that enabled Obama to be a two-term president. Even though this strategy failed in the 2018 midterm elections, Trump’s trying it again. That’s because he has no policy idea solutions to the problems that plague this nation. He’s only interested in maintaining power and using the office of the presidency to further enhance his fiscal profile and value of his businesses (by the way he still hasn’t disclosed his tax returns).

The challenge for those who oppose him is clear. We must turn out in full force in November and get this white supremacist champion out of office, before he can appoint any more Supreme Court justices, and continue trying to reverse what progress this nation has made.