A white supremacist rally in Shelbyville was met by police and counterprotesters, and a second rally was canceled.

By Cristopher Mathias
White supremacists, neo-Nazis and fascists descended on a Middle Tennessee town Saturday for a “White Lives Matter” rally, striking fear into communities desperate to avoid the kind of violence that visited Charlottesville, Virginia, nearly three months ago.

But it was met with a heavy police presence and resistance from counterprotesters. A second rally planned for the afternoon in the larger college town of Murfreesboro was abruptly canceled by organizers.

An umbrella group of white supremacist organizations called the Nationalist Front held its first rally Saturday morning in Shelbyville, a town of 21,000 about an hour south of Nashville.

Police stood between some 200 counterprotesters and various white supremacist factions as they exchanged chants. Some white supremacists were seen throwing up Nazi salutes, while others, carrying shields and wearing helmets, chanted “White lives matter” and “Blood and soil.”

Mike Tubbs, an imposing former Green Beret who spent time in prison for plotting to bomb black and Jewish businesses and who was responsible for violence in Charlottesville, led the hundred or so white supremacists into their designated rally area.

“I’m here to defend my heritage and my people against the forces of darkness,” he told HuffPost.

Counterprotesters heckled them from the other side of the street, offering free genetic testing to the so-called “master race.” 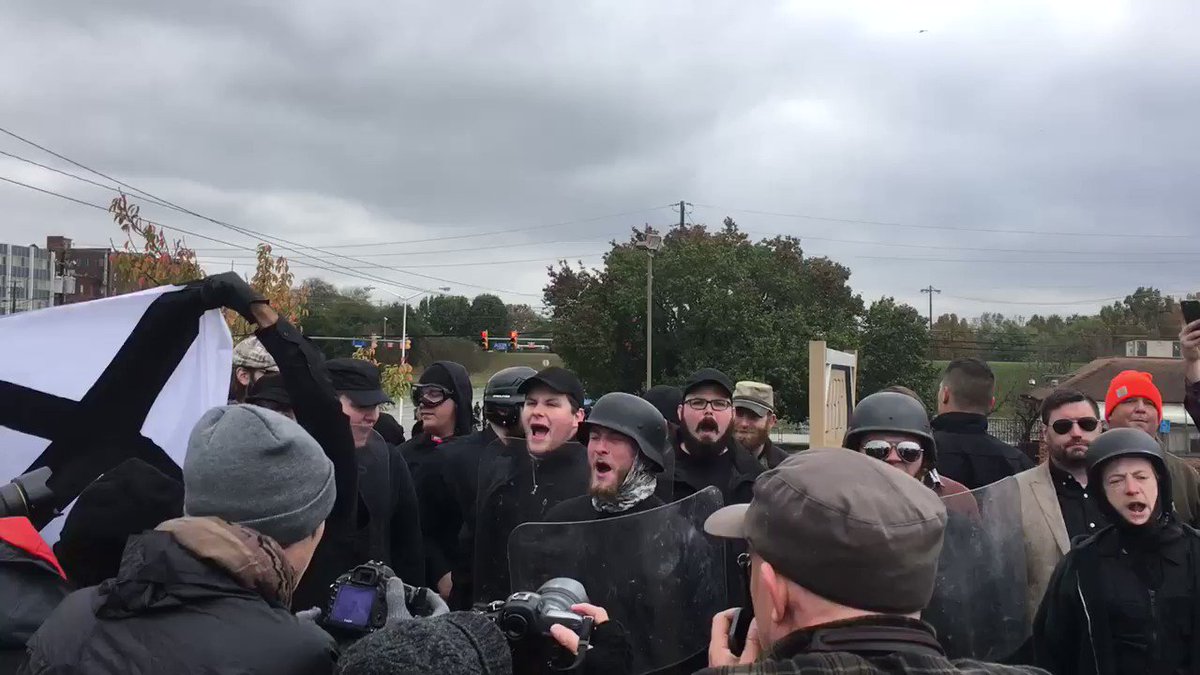 Still, the sheer number of hate group supporters was jarring to the people of Middle Tennessee.

“It’s kinda terrifying how organized they are. Because it’s so many different groups,” local activist Mike Cannon, 29, told HuffPost. “It’s more evidence after Charlottesville that the alt-right is a movement we need to pay attention to.”

Later in the afternoon, organizer Brad Griffin ― who goes by the pen name Hunter Wallace and is a leader in League of the South ― canceled the rally scheduled for Murfreesboro, a larger college town 25 miles back toward Nashville. He said on Twitter that his fellow white supremacists have “nothing to gain.”

Counterprotesters were seen celebrating in the streets after the white supremacists pulled out of the main rally.

All the Nationalist Front groups present were seen at the “Unite the Right” rally in Charlottesville in August, which broke out in violence and ended with white supremacist James Alex Fields Jr. allegedly driving his car into a crowd of counterprotesters, killing 32-year-old Heather Heyer.

Fields was protesting in Charlottesville with Vanguard America, one of the groups in Tennessee on Saturday. Other groups included the League of the South, Traditionalist Worker Party, National Socialist Movement, Anti-Communist Action and The Right Stuff.

The specter of Charlottesville hung over both of the rallies. To stem any potential violence, police in both Shelbyville and Murfreesboro posted long lists of prohibited items, including everything from guns and baseball bats to selfie sticks, water bottles and laser pointers.

One of the stated aims of the white supremacists Saturday was to “turn the page on Charlottesville,” burnishing the Nationalist Front’s image after its violence at the August rally was broadcast across the world.

No swastika flags this time, wrote Griffin on his blog Occidental Dissent earlier this month. That got the Nationalist Front bad press.

On Friday evening, a HuffPost reporter met Jeff Schoep, head of the National Socialist Movement, in a hotel parking lot in the Nashville area. Standing with three NSM subordinates, two of them armed, Schoep too seemed fixated on changing the optics of organized white supremacy in America. No more swastikas, he said. No more shouting racial epithets.

But it’s hard to teach an old Nazi new tricks. When a pair of young black men started taking photos of the Nazis hanging out in a hotel parking lot talking to some journalists, a middle-aged NSM member wearing SS lightning bolts on his jacket said, “Get out of here, n****rs.”

“Don’t,” Schoep chided him under his breath.

Still, Schoep felt comfortable explaining to HuffPost that the long-term goal of NSM is to create a “white ethnostate” or “white homeland” in America. But for now, being “white civil rights advocates” will do.

And that means protesting refugee resettlement in Tennessee, Schoep said, and bringing attention to the church shooting in the nearby town of Antioch last month, in which 25-year-old Emanuel Kidega Samson opened fire at a church, killing one and injuring at least seven others. Samson came to the U.S. from Sudan as a child, The Associated Press reports.

Schoep criticized the press for not covering the Antioch shooting nearly as much as the 2015 massacre at Emanuel African Methodist Episcopal Church  in Charleston, South Carolina, when white supremacist Dylan Roof killed nine black people. A note found in Samson’s car in Antioch reportedly referred to revenge for the South Carolina shooting.

“When a white person does something that’s directed at so-called minorities then it’s a big issue, but when the shoe’s on the other foot, and it’s a so-called minority doing it to white people, even though it’s the exact same thing, it’s brushed under the rug,” he said. 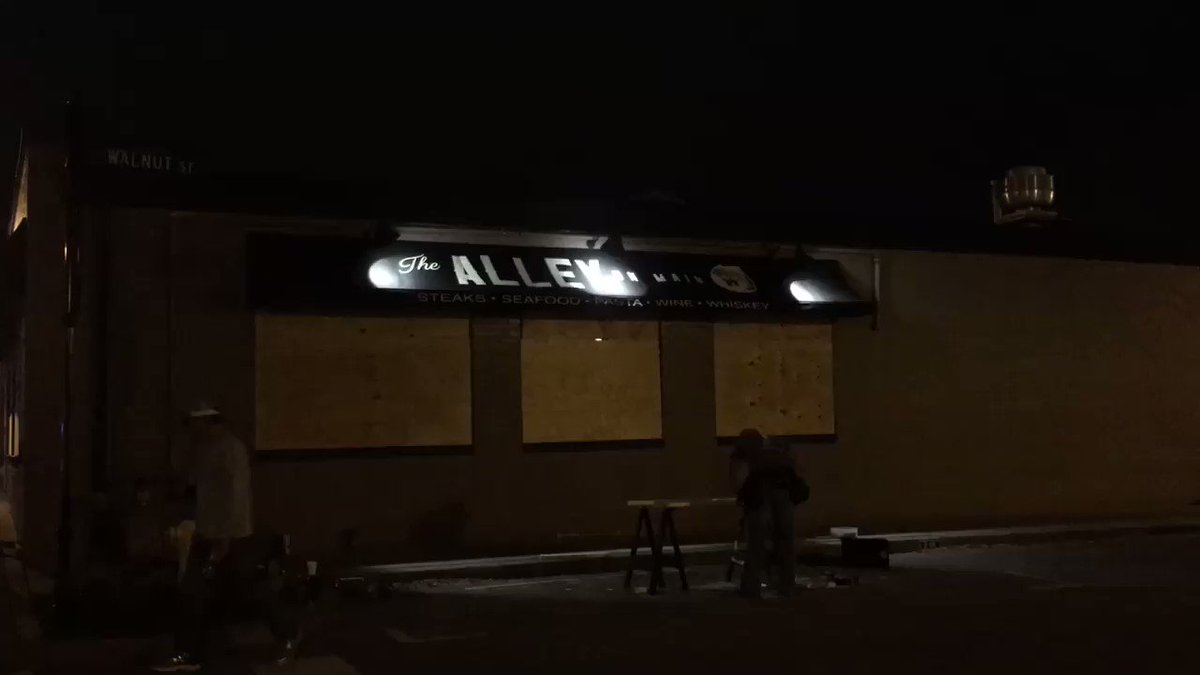 The Islamic Center of Murfreesboro, fearing that it could be targeted, prepared to cancel services and religious classes. Earlier this year, two young men were arrested for wrapping bacon around the front door of the mosque (pork, the consumption of which is forbidden in Islam, is a common weapon of Islamophobes) and spray-painting profane anti-Muslim messages on the building’s exterior.

Since it opened in 2012, the mosque has received a bomb threat and been the target of arson. Women in headscarves outside the center have been harassed. In 2010, over 300 anti-Muslim protesters marched on the mayor’s office here, chanting “No Shariah in the USA!” and demanding that the the town not allow the Islamic center to be built at all.

Saturday’s White Lives Matter rally felt like an extension of all that hate, said Dr. Saleh M. Sbenaty, a professor at Middle Tennessee State University who is a member of the mosque.

“It’s that you are living like a hostage in your own town and city that you’ve lived in and loved so many years,” he said of the rally. “This is not the U.S. we know of, and I hope this is not the way from now on. It’s unbelievable.”

‘White Lives Matter’ distances itself from the rich legacy and history of social movements by perpetuating racist rhetoric and employing hateful fear tactics. In its original and historic form, a social movement can be described […]