Absent from the agreement is India, which opted out in November 2019, citing “significant outstanding issues which remain unresolved.”  India’s External Affairs Minister S. Jaishankar said at the time, “No pact was better than a bad agreement.” The partnership had been in making since 2012.

The agreement signed by 10 member nations of the Association of Southeast Asian nations, along with China, South Korea, Japan, Australia and New Zealand, covers a market of almost 30 percent of the world’s population, with a combined GDP of $26.2 trillion, or 30 percent of global GDP, according to the RCEP.

A primary concern of India relates to China dumping cheap products in India. The concern stems from the clause in the agreement about “common rules of origin” — a norm that does not discriminate among nations in terms of tariffs.

“The domestic industry in India is concerned with a lot of capacity that has been created in China, which may result in the dumping of products from China,” said Ajay Sahai, director-general and CEO of the Federation of Indian Export Organization (FIEO), India’s top trade promotion organization. 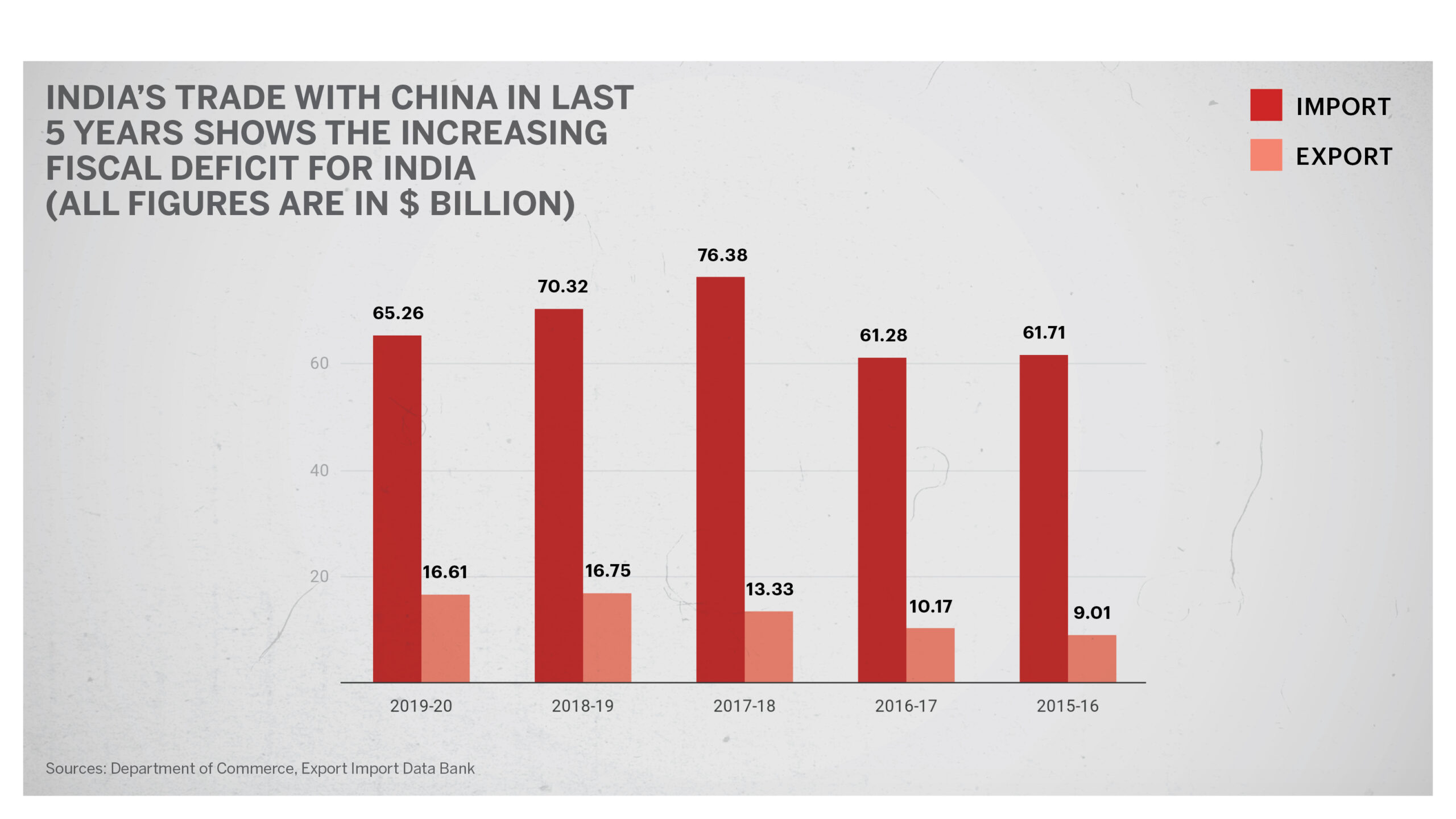 Data from Exim Bank shows that India’s trade deficit with China in the first six months of this financial year, between April and September, was about $16 billion. A trade deficit occurs when imports exceed exports.

“One of the most significant changes under RCEP is the creation of common rules of origin for the entire bloc. Once implemented, RCEP countries will only require a single certificate of origin,” according to an article by William Alan Reinsch, senior adviser and Scholl Chair holder at the Center for Strategic and International Studies in the United States.

“This will allow companies to easily ship products between RCEP countries without needing to worry about the specific rule of origin criteria in each country or for each manufacturing step. India would have had to significantly decrease its tariff and non-tariff barriers, which currently cover up 90 percent of imports depending on the country of origin, if it were to proceed with joining RCEP,” the document states.

Another concern for India is in regard to the norms governing data localization. India has been pushing for data localization for e-commerce, but RCEP doesn’t bar members from sharing data. It took almost two years for WhatsApp to roll out payment services in India because of the government’s insistence on data localization, or keeping the Indian data within national boundaries.

India also has political reasons for not joining RCEP. The trade bloc comes to life at a time when India’s relationship with China is tense owing to a border dispute. India is looking to alienate China economically by decreasing trade with it, and promoting local industries.

Chinese troops in June killed 20 Indian soldiers in a standoff at Galwan Valley in Ladakh. India accused China of crossing the Line of Actual Control (LAC) in the region. Subsequently, India banned close to 224 Chinese apps, including the popular TikTok app.

Now, with China being a part of a trading bloc that would command one-third of the world economy, India’s efforts to economically isolate China weaken.

“China will definitely gain as the RCEP will establish the fact that decoupling from China is difficult for the region,” said Amitendu Palit, senior research fellow at the Institute of South Asian Studies at the National University of Singapore.

“The RCEP means much of regional trade will be carried out under common rules by ASEAN and its regional partners. For India, it means negotiating with a trade deal that will now mean more of India’s regional partners trading with each other on better terms than they do with India. As far as the U.S. is concerned, it will need to look at the regional developments closely. It will also perhaps need to focus on reestablishing trade relations in the region through new efforts.”

India is pushing to strengthen local manufacturing during one of the worst slowdowns in its history since independence.  The central Reserve Bank of India has already flagged concerns about a recession in offing.

The government also launched a campaign called Atmanirbhar Bharat, or Self-reliant India, to strengthen manufacturing by offering sector-specific benefits. India is also looking at new trade realignments to counter the increasing clout of China in the world trade map. 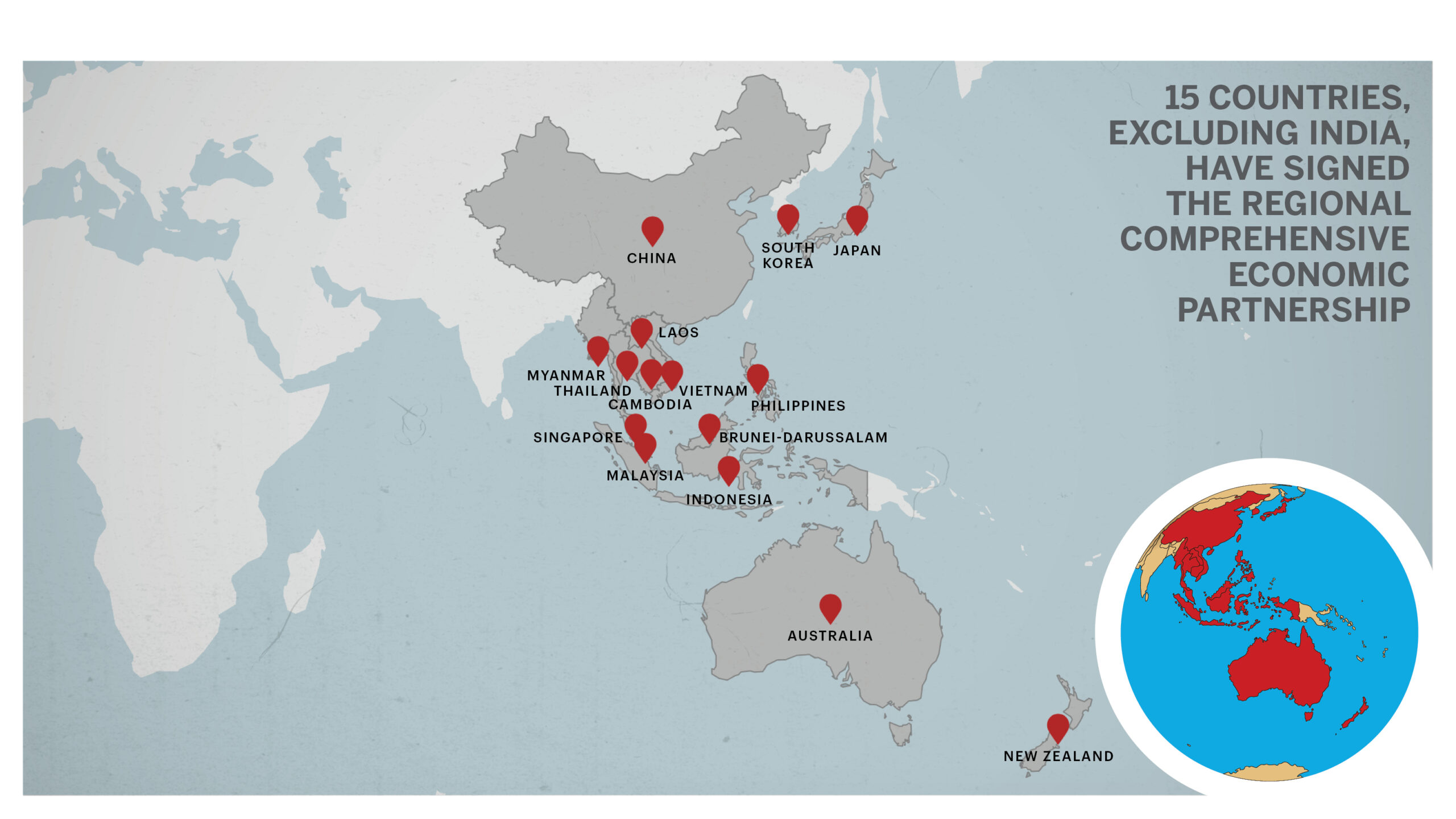 “Out of 15 countries in the bloc, India has free trade agreements with ASEAN and India has CEPA (Comprehensive Economic Partnership Agreement) with Japan and South Korea,” said Sahai.

“For Australia and New Zealand, we are working with some sort of free trade agreement, which is in the pipeline. We are entering into new affiliations, like India, the U.S., and Japan to be part of the global value chain. A lot of realignment is happening.”

India has also been offered the status of observer nation in the bloc.

“We would highly value India’s role in RCEP and reiterate that the RCEP remains open to India,” the RCEP said in a statement. “Any time prior to its accession to the agreement, India may participate in RCEP meetings as an observer and in economic cooperation activities.”

With RCEP, the possibility of more Chinese goods entering Indian markets via a third nation, which is a signatory of the agreement, cannot be ruled out.

“If Chinese goods enter the Indian market with less than 40 percent value addition, India can raise questions, ask for details, and they can stop the movement,” said Vijay Mathur, former additional secretary-general at the Apparel Export Promotion Council.

There are expectations that India may come back to the negotiation table if relations with China improve.

“We will have to observe China’s moves carefully. Within RCEP, Japan is keen that India be a part of the bloc. If our relationship with China improves, there is hope we can come to the discussion table. As of now, India not joining RCEP is more of a political issue,” said Mathur.

(Edited by Siddharthya Roy and Judy Isacoff. Map and graph by Urvashi Makwana.)