to-head with teammate Kirk Jay. Colton sang the classic R&B hit “Lady Marmalade” by LaBelle and Kirk performed “In Case You Didn’t Know” by Brett Young. In the end, superstar judge Blake Shelton named Kirk the winner of the Knockout. But just a few moments later, superstar judge Jennifer Hudson pressed her button to STEAL button to quickly snatch Colton back to her team for the Live Playoffs for this week.

Smith started out in life in the small town of Albertville, AL, which wasn’t always easy for Colton. He often struggled to meet the many expectations of being a stereotypical boy. From a young age, Colton knew that he was gay and was not openly accepted by his community. He turned to theater and songwriting to help process his emotions. It wasn’t until college that Colton gained a sense of freedom. With the support of his mom and stepdad, Colton feels “The Voice” is his platform to showcase his musical calling. Colton is a senior at Belmont University, so all of his fellow campus colleagues will be cheering their classmate on to victory as the competition heats up in the live rounds. Between rehearsals, Colton answered 5 Questions about his amazing journey on The Voice.

TRIBUNE: Can you tell what kind of week have you been having?

COLTON: I’ve had an awesome week just working and getting ready for the playoffs next week. I’m so excited. This week is the real stuff. It’s gonna be live!

TRIBUNE:  In addition to rehearsals, what are you doing to mentally prepare for the Live Rounds?

COLTON: I will get focused on what my job is and what I’ve got to do. I will be doing a lot of meditating and praying, you know. Obviously, I’ve never performed in front of a live TV audience before but usually I just kind of take a second and remember who I’m doing this for and why I’m doing it and all the sacrifices people have made for me to get here.

TRIBUNE:  So what does it feel like to be re-stolen by Jennifer Hudson?

COLTON: OMG! Jennifer has an Oscar and a Grammy. She’s a legend. So, getting to be on her team in the first place was such a huge honor. I felt so privileged and then having Blake steal me in the battle, that was unreal plus, singing one of his songs too was awesome! He believed in me that much that he stole me and wanted me on his team. After I performed in the Knockout Rounds, I wasn’t fully prepared to go home. But then when Jennifer stole me back, I was crying like a baby. It was an emotional roller coaster ride for sure.

TRIBUNE:  You just blew everyone away singing Lady Marmalade.  That is not an easy song to sing. Have you previously performed the song before?

COLTON: Lady Marmalade was one of my mom’s favorite songs. We always had it on the radio somewhere in the house when I was growing up. So, it’s always kind of been a part of my life. That song allowed me to show the big performance side of myself on The Voice–that was another big reason why I picked it to sing.

TRIBUNE: Since you’ve now been on both Blake and Jennifer’s teams, what’s some advice each superstar judge has given you?

COLTON: Jennifer gave me so much advice about not only performing but other things that I can use in my everyday life. Such as: don’t ever put yourself inside a box; don’t let people tell you what you should be doing as a performer; exist outside of the box instead, create your own kind of weird box. She said ‘Don’t get carried away in a song to where you don’t bring the audience back with you at the end.’ Blake gave me a big piece of advice about singing Lady Marmalade. He said: ‘You can’t just stand up there and sing the song, you have to own that style of song. And he said: ‘You can’t let a song sing you.’ A lot of people think that Blake knows about only country music but he has so much insight and knowledge into so many styles of music. He’s amazing! 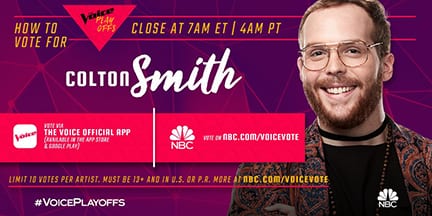