It is one of the most riveting thriller novels written about a rising epidemic – a must read.

After learning about the suicide deaths of two 9-year old Alabama girls, Young decided to take on these two powerful topics in a legal thriller. 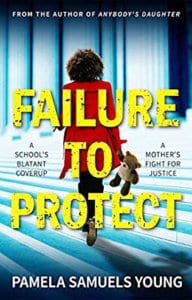 thrillers, having penned 14 books over a span of a 20-year writing career. She has been compared to the modern legal thriller authors such as John Grisham and John Patterson.

Her work has netted numerous awards, most notably the NAACP Image Award for Outstanding Fiction for her thriller Anybody’s Daughter.

In researching the subject, Young was stunned to learn that the suicide rate for African-American kids under 12 is twice that of white kids.

“We need to end the silence shrouding suicide,” Young says. “By writing a legal thriller that both entertains and educates, it’s my hope to help do that.”

Stay tuned to Pamela Samuels Young by following her on social media: Twitter: @AuthorPSY and Facebook.com/pamelasamuelsyoung