NASHVILLE, TN — They were on the front lines, and served behind the scenes, of some of the most important social and civic missions of the 20th Century, from desegregation to education and social reform, from helping heal the sick to opening avenues to the arts, journalism, and raising a joyful ruckus for a good cause.

And when there wasn’t a seat at a power table filled with men, they created one of their own. 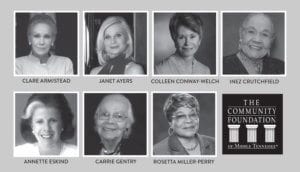 Thursday, Oct.17 at the Music City Center’s Davidson Ballroom. Each year this award honors a person or persons who, like the late Joe Kraft, demonstrates a commitment to community, home and hearth, and individuals in need.

Honorary chair of this year’s event is Martha Ingram, noted philanthropist and business leader, and a prior recipient of the Joe Kraft Humanitarian Award.

“The breadth and depth of heroism in this community may not start with the seven women we will honor at the Joe Kraft Humanitarian Luncheon on October 17th, but it won’t end, either,” said Ellen Lehman, president of The Community Foundation.

“Whether it’s the Arts, Education or Health; building bridges or building families, these women have shown the rest of us what it means to lead, and what it takes to chart a course to a better future for individuals and our community,” Lehman continued. “But for them and their contributions of talent, time, treasure and sheer bravery — we would be less than we are. Please join us in thanking them.”

The 26th Annual Kraft luncheon will be held Thursday, October 17 at 11:30 a.m. at the Music City Center’s Davidson Ballroom in Nashville. Tickets are $80 per person, and tables of 10 can be reserved for $800. Reservations for the event can be made through October 11 online at The Community Foundation’s website (www.cfmt.org) or by calling 615-321-4939. Media is welcome.

Rosetta Miller Perry has made a career — several careers, really — of giving a voice to the voiceless. She worked closely with Dr. Martin Luther King and other Civil Rights leaders both as a journalist and working for the U.S. Civil Rights Commission in the 1960s and the U.S. Equal Employment Opportunity Commission in the 1970s. Since 1992 she has been the influential founder and publisher of the community minded The Tennessee Tribune, which focuses on issues such as health, education, and voter registration. Rosetta has always stood up and spoken out for causes that mattered, whether popular or not.

A retired TSU administrator, Meharry Medical College board member, and longtime community activist, Inez Crutchfield may even be better known for her role in local and national politics. In 1963, she was among the first African-American women to become a member of the Democratic Women’s Club of Davidson County and later served as its president. Behind the scenes, Inez and her family worked to assist desegregation efforts in Nashville. In 2006, the Tennessee and Davidson County Democratic parties honored her as “one of the individuals who has exemplified the work of Dr. Martin Luther King Jr.” by providing leadership for all Tennesseans during the Civil Rights Movement.”

Like her best friend Inez Crutchfield, Carrie Gentry and family also worked without fanfare by offering transportation, food — and sometimes bail money — to the young college students and activists involved in the nonviolent Freedom Riders and Lunch Counter Sit-In Movements of the early 1960s in Nashville. A TSU teacher in rhythmic and modern dance and director of the majorettes for TSU’s marching band for 17 years, she and Inez Crutchfield later became involved in the League for Women Voters, and were among the first African-American members of the Davidson County Democratic Women. In the 1970s, Carrie could be seen in a host of television commercials whenever elections were coming around. Her poise, her beauty and her tirelessness kept her in high demand well into very recent years.

The Joe Kraft Humanitarian Award Fund continues the memory of Joe Kraft, who made Middle Tennessee a better place to live through his dedication to community, home and hearth, and individuals in need. The committee who chooses the recipient is particularly interested in nominations of community leaders who, like Joe, sometimes function behind the scenes. The person(s) named as the recipient of this annual award receives the opportunity to recommend that grants from this Fund be distributed to charities in which he or she believes.